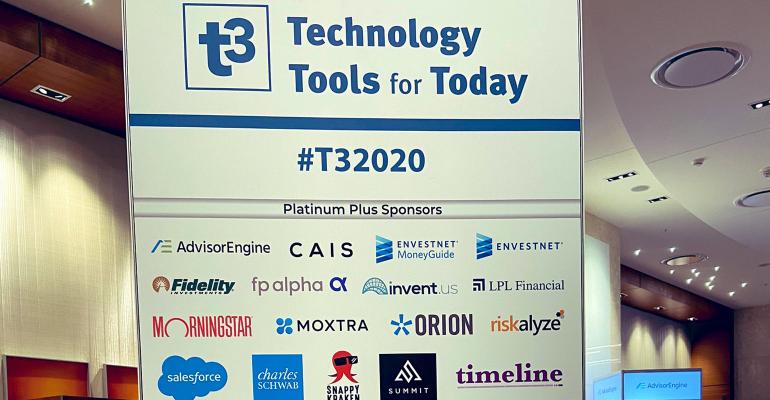 The annual advisor technology conference saw presentations from Fidelity, Morningstar, AdvisorEngine and a debut from Timelineapp.

The 2020 T3 Conference kicked off in San Diego on Monday with a stark warning on fee compression and wealth fragmentation, followed by assessments of the growing importance of super platforms, a well-known firm acknowledging it dropped the ball on mobile app development and the introduction of a new fintech working on improved decumulation guidance for advisors and their clients.

Balancing fees against services provided is a game advisors are forever playing, as they seek to expand margins while remaining competitive. Recently, it seems, advisors have been feeling confident in their ability to charge fees, even considering raising them, said Rich Cancro, CEO at AdvisorEngine. But that confidence is misplaced, he said, for two reasons: first is fee compression, which is eroding margins and second is the wealth transfer currently underway. As retirees shift assets to the next generation it results in the spreading of smaller amounts of wealth among a large group of potential clients he said.

To illustrate his point, Cancro presented a hypothetical. In this scenario half of wealth transfers are spread across 2.2 next geneneration beneficiaries over the next decade, meaning that an advisor serving 300 clients now potentially services 480. At the same time, he assumes 2% annual fee compression, meaning today’s 80 basis points of fees erode to 65 basis points of fees over the next 10 years. In his hypothetical we have a firm with three advisors, 300 clients and $600 million in AUM with a fee of 85 basis points, today, will be serving 480 clients at a fee of 65 basis points in a decade, assuming the AUM stays the same.

“These are really, really tough numbers,” said Cancro. “This is real and this is going to happen and there's nothing anyone here can do about it. But what you can do is transform to scale your company.” 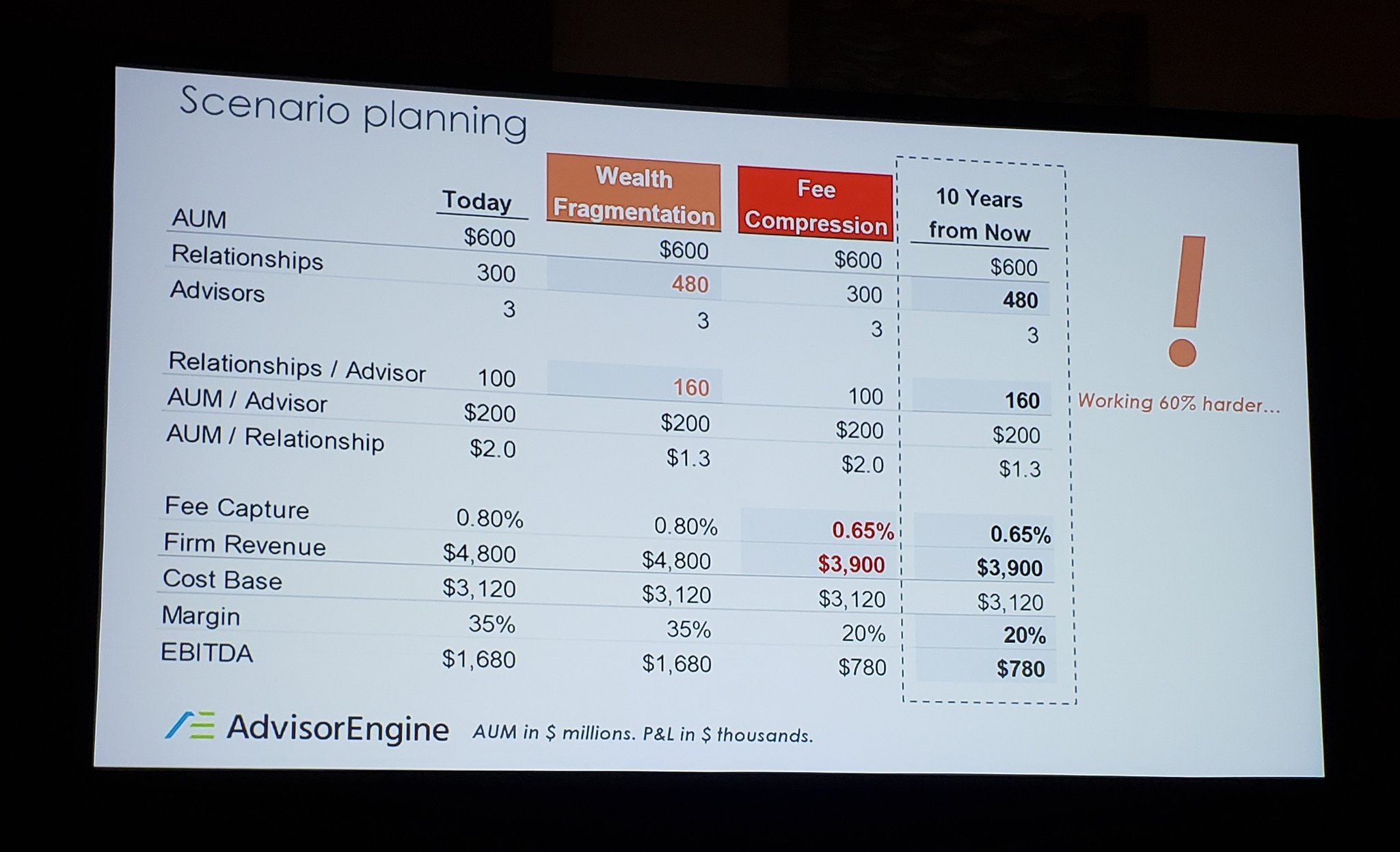 His solution employees technology automation that allows firms to leave referral-based growth behind and turning to marketing-based growth, instead. Essentially, working faster without adding to costs.

Another technology-based solution to the squeeze described by Cancro could be the super platform.

Tricia Haskins, VP of digital strategy and platform consulting at Fidelity Institutional, in a separate session, made a very similar point to Cancro's. With seven of the 10 largest companies in the world positioning themselves as platform businesses, advisors should be approaching their businesses by looking for platforms to operate off of, she said.

7 of the 10 most highly valued businesses are super platforms. Our business is moving in the same direction #T32020 pic.twitter.com/SdLzlhcF9w

Advisors should be thinking about their services in terms of selling experiences, like planning, instead of features and functions, as they have in the past, Haskins said.

It’s not just advisors who need to evaluate how things are done. Morningstar admitted that it had dropped the ball on a vital piece of technology in today’s advising landscape: its lack of a modern mobile app. In a presentation outlining the improvements to come in Morningstar’s new wealth management platform, called Advisor Workstation 3.0, the firm fell short in developing a mobile app, said Peter Franco, the firm’s senior product manager of advisor software.

“It's taken us some time to play catch up here, admittedly, to our own discredit,” he told the conference attendees. “But we are working on a new mobile app for Advisor Workstation 3.0.” The app, as described, would allow advisors to access investment analytics on-the-go from a mobile device.

While scrambling to develop a mobile app, Morningstar will also be bringing models to the forefront of the new interface, said Franco. The firm’s planning tool, Goal Bridge, will continue as a centerpiece on Advisor Workstation 3.0, but advisors will also be able to show how their models performed historically, a feature the firm hopes will allow advisors to showcase their models and convert potential clients into paying clients.

The emphasis on models will extend to portfolio construction, where portfolios will be suggested, based on models, or even automatically built.

And while many of the companies at T3 are familiar to advisors, Timelineapp may not ring a bell for U.S.-based wealth managers. But the UK-based decumulation guidance software developer received some attention at the conference for a tool that is obsessively focused on helping advisors and clients through the delicate, and often frustrating, task of decumulating assets.

The tool returns four pieces of information, a figure measuring the likelihood of plan success, based on Monte Carlo simulations and presented as a percentage, a figure indicating how much wealth will be left after the client dies, a longevity figure indicating a client’s expected lifespan and a number reflecting available assets for retirement. Those figures are based on the results of client data accessed via integrations with Redtail, Black Diamond, MX and its set of open APIs.

The firm’s CEO and founder, Abraham Okusanya, developed the company, in part, based on his curiosity around the “4% rule,” often cited as a decumulation rule of thumb. He went on to write a book about the science of retirement portfolios, taking a deeper look at how decumulation can be done more efficiently.

Besides presenting decumulation metrics that can help kickstart pre-retirement client conversations, the tool comes with Livetrack, a feature that runs weekly calculations to determine if the client is still in an acceptable percentile for plan success. The tool also charts the clients’ retirement journey across a graph measuring the clients’ assets and age, across bands representing likely and unlikely portfolio return scenarios. 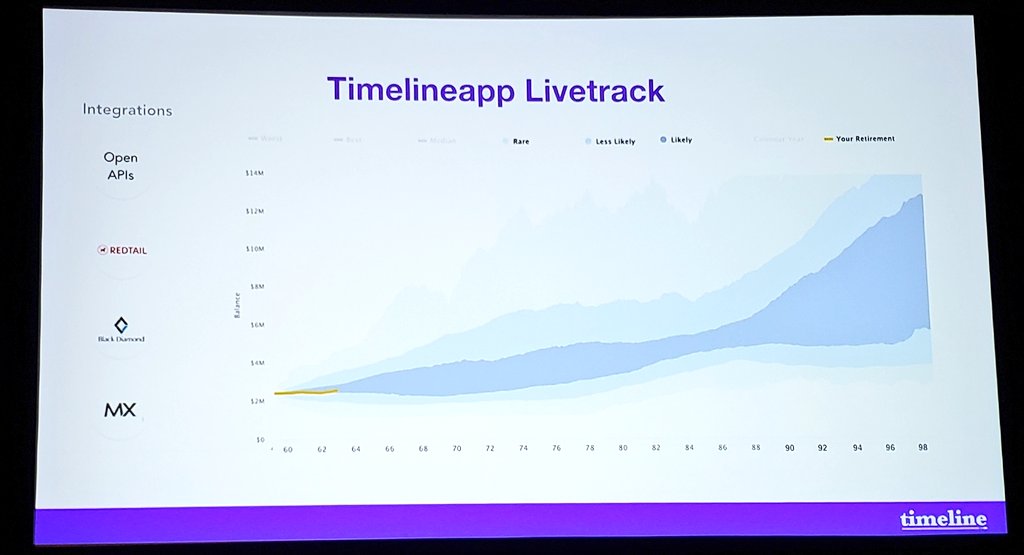 The conference continues through Thursday, with presentations from custodians, portfolio management vendors, CRM providers and more.