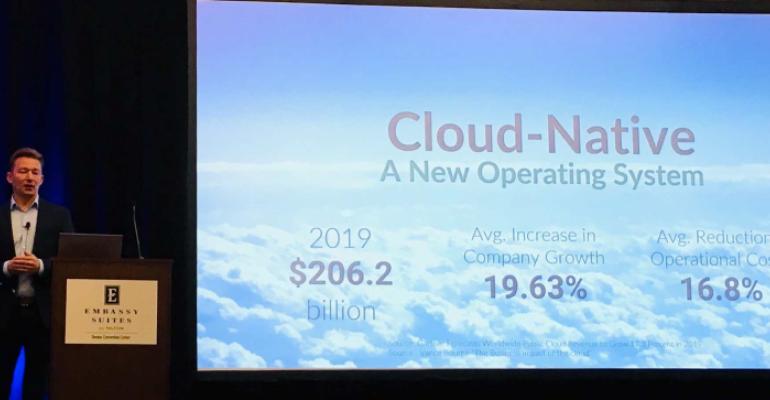 Drawing analogies to football, a multi-sun universe and Marvel’s Avengers superheroes, Tishkevich said the strategy of using APIs to solve problems in financial technology is becoming overwhelming and advisors are struggling to complete the last drive into the endzone.

Almost every firm is opening its services to work with other firms’ services—an evolution that’s created a vast universe of companies. “In our industry, everybody’s got an API. So now we have a lot of suns in our universe,” said Tishkevich. What’s needed is a new architecture for software, run by developers with “superpowers,” including some that worked with Microsoft to help the company create its cloud.

In fact, cloud architecture is the key to Tishkevich’s Invest.us. In April 2018, the company, operating in “stealth mode,” rolled out a beta-launch of a “cloud-native” tool for a large U.S.-based broker/dealer. The tool now supports 14,000 users.

Cloud-native is “almost a new operating system,” he said. “This delivers 20 percent savings on growth and 16 percent savings on your bottom line.” Services include transforming legacy systems so they can operate, not just reference, the cloud; building wealthtech-specific cloud architecture and designing and integrating cloud-native tools with outside tools.

Following the official launch of Invest.us, Riskalyze’s Klein was next on stage announcing “Timeline,” a “precursor” to a financial plan and delivered as part of his firm's Retirement Maps. It’s available for Premier users and can be added to the accounts of Pro customers. He also updated conference attendees on the availability of Multiple Opinions, a feature announced at the firm's 2018 Fearless Investing Summit.

While not intended to replace a financial plan, Timeline “can be a great way to start that discussion,” said Klein. The elements of Timeline are available to third-parties that want to integrate, so stand-alone financial planning software packages like MoneyGuidePro or eMoney might soon have even tighter integrations with Riskalyze.

The original intent of Retirement Maps was to “communicate the concept of risk capacity,” said Klein in a statement. The idea behind making Timeline events dynamic and referenceable outside of Riskalyze seems to be making them more functional, while also making the tool an even more important part of the advisor’s tech stack.

After marketing its Fearless Investing on the road last year, Riskalyze is doing more roadtripping, scheduling 4 ½ hours of training in six cities across the country in 2019. The “Bootcamps” will start in Washington, D.C. this April.