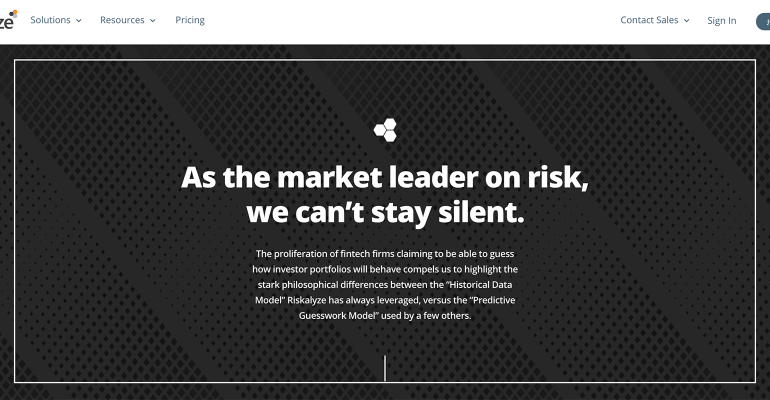 A screenshot of the Riskalyze website at the focus of its marketing campaign against its competitors.
Technology

Riskalyze Launches 'The Risk Wars' but Backtracks on Naming Names

Riskalyze softens the edges of a marketing campaign targeting competitors, but as fintech firms' vie for more space in front of advisors, analysts say there may be more bumpy roads ahead.

Forceful advocacy and strong opinions are no strangers in the world of wealth management, but rarely do those differences spill into public view. That changed on Tuesday as Riskalyze launched a marketing campaign targeting its competitors, by name, while accusing them of flawed methodologies that could prompt fiduciary liabilities on the part of advisors.

Orion’s HiddenLevers and independent fintech firm RiXtrema were the explicit targets of the campaign, as Riskalyze CEO and co-founder Aaron Klein assumed the mantle of advisor advocate and fiduciary arbiter in his attack, highlighting differences between Riskalyze's approach and that of competitors.

But analysts and advisors, even one quoted by Riskalyze in its marketing materials, don’t see the wealth management-focused technology ecosystem as a zero-sum game. Technology is evolving too fast, they said, and the concept of “frenemy,” where competing firms are forced to work with each other, even while competing, is far from dead.

Indeed, even Riskalyze made it explicit that it intends to continue working with HiddenLevers' parent company, Orion Advisor Solutions. Orion's CEO Eric Clarke told RIABiz that he was “taken back” by the campaign, and intended to address what he said were its misleading statements.

While still maintaining differences in the methodologies used, Klein began walking back the “Unhiddenlevers.com” campaign on social media Wednesday evening.

1/We believe in our methodology and that it’s worth defending. That said, parts of what we actually said have been misperceived by some, and I wish in hindsight we’d kept our focus entirely on methodology differences, and hadn’t called out other risk products by name.

The website created by Riskalyze targeting competitors no longer includes their names, and quotes from advisors have been removed. The domain Unhiddenlevers.com no longer redirects to Riskalyze's marketing page. The search engine optimization text of the Riskalyze marketing page, however, still contains the text "Riskalyze vs HiddenLevers | We Can't Stay Silent."

"We refocused that web page on the contrast between methodologies and results and removed all references to a competitor’s name," said Klein. "I think that’s the right thing to do."

“Listening to financial advisors, no one is ready to throw one methodology under the bus,” he said. He likened it to weather forecasting: Meteorologists will use multiple models when making their assessments. Many advisors do the same.

But there are more than just analytical differences between Riskalyze and HiddenLevers, he said.

Riskalyze has made risk metrics simple, said Gallant. Clients like that. Riskalyze also has trading capabilities, broadening its use cases.

HiddenLevers provides advisors with more help on their business development, he added. As artificial intelligence becomes more advanced, forward-looking analysis facilitated by the firm could be more robust.

But that doesn’t change the fact that there’s limited room on an advisor’s desktop; or the awkwardness that the marketing campaign has precipitated.

Six years ago, Josh Saunders, who operates his independent Kingsview Partners wealth management practice out of Roseville, Calif., had the opportunity to demo HiddenLevers. He wasn’t impressed enough to buy the software, instead opting for Riskalyze, but he didn’t think it was “inaccurate” or “predictive guesswork,” some of the terms used by Riskalyze to describe HiddenLevers’ methodology.

“Some guys in our firm liked it, as far as a finance tool. I had a different opinion and decided not to use it,” he said of HiddenLevers. “I just really like Riskalyze.”

But liking one tool is not the same as thinking the other is a potential fiduciary liability. Saunders, who manages the assets of 75 households and was the advisor "Josh S" quoted in the original version of Riskalyze’s marketing campaign, also uses Orion, the firm that now owns HiddenLevers. His is a real-world example of the complexities of advisors’ tech stacks.

“There’s lots of mutual respect across lots of levels from all the fintech CEOs and groups. They've all started up and grown up together, but at some point, they have to compete,” he said. “They're kind of walking those lines—teetering on them currently.”

The two firms are clashing only because of the “furious evolution of the fintech space, whereby everyone’s trying to expand from being a point solution to a platform,” he said.

He also noted that it’s not the first time HiddenLevers co-founder Raj Udeshi has been involved in a contentious industry encounter. Citing a 2019 report by RIABiz, Trout recalled animosity between Udeshi and Envestnet co-founder Bill Crager, now CEO, at a panel moderated by Clarke. Udeshi and Clarke are now working at the same firm, and Orion has integrations with Envestnet products like MoneyGuide.

One possibility for the marketing push by Riskalyze, Trout said, is that the firm wants to expand into portfolio risk analytics and portfolio visualization, an area of strength for HiddenLevers. Advisors are reluctant to buy models that aren't “roadtested,” he said, and Riskalyze could be sizing up that market.

“Riskalyze has been focused on growth and helping advisors in the pandemic. My only question is whether they're going really into sort of portfolio risk modeling,” he said. “That would place them into conflict with HiddenLevers and RiXtrema.”

Ultimately, “the risk wars” will catalyze advisors to think about risk methodology but little more, concluded Trout. “The fintech ecosystem is evolving so fast in terms of swallowing each other up that it's almost like today's competitor is tomorrow's collaborator,” he said. “These guys could bury the hatchet or not, but they still exist in the RIA ecosystem.”