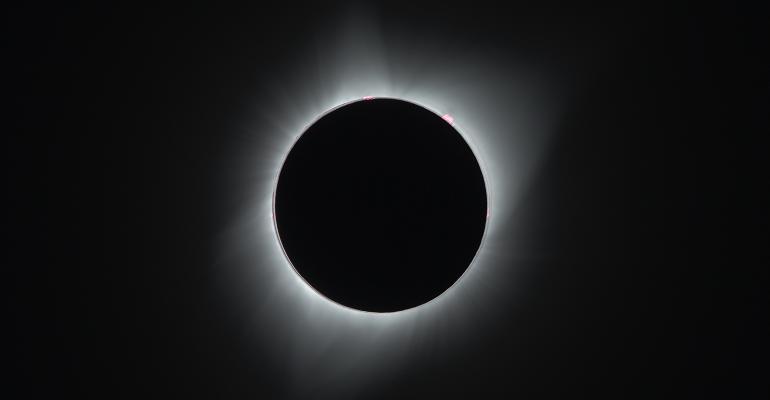 Ally Invest detected a drop in client logins and trade activity during the total solar eclipse.

Did Monday’s total solar eclipse have an effect on the U.S. economy? It depends on who you ask.

An NBC News report estimated $700 million would be lost in productivity, while Recode disputed the math and pointed out that Americans allegedly fritter away billions all the time to things like fantasy football and Facebook. Even if there is an effect, Forbes asked, “Who cares?”

But it turns out the eclipse did have a measurable effect on the habits of retail investors. Ally Invest, the online brokerage and digital advice provider formerly known as TradeKing, spotted a dip in both account logins and trade activity.

Ally Invest president Rich Hagen said that, compared with a typical summer Monday, client logins were down 20 percent to 25 percent from 2 p.m. and 4 p.m. EST. From 2 p.m. to 3 p.m., transactions fell 30 percent to 40 percent.

“This showed us that retail investors were really interested in this world event,” Hagen told WealthManagement.com. “They stepped away from computers or mobile devices or tablets just to enjoy.”

Hagen said despite the drop, Monday was actually a busy day overall; the second-busiest day in August.

Ally Financial acquired TradeKing in April 2016 for $275 million in cash, and renamed the service Ally Invest earlier this year. The company’s self-directed trading and managed-account offerings have since been integrated with Ally’s existing online-banking business.

According to Ally’s second-quarter earnings report, Ally Invest has 249,903 accounts with $5 billion in customer assets. While Hagen couldn’t specify how the acquisition and rebranding affected those numbers, he said that it has so far gone “very well with account acquisition and growth.”

He attributed the access to preserving TradeKing’s user experience for existing customers. Though they now log in through Ally.com, the functionality remains the same.