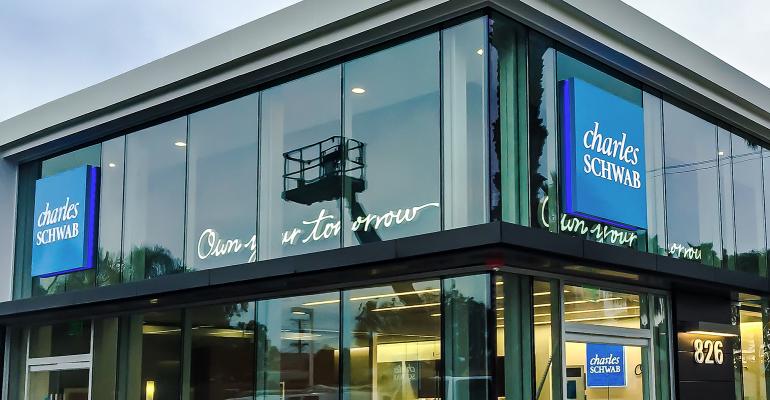 Charles Schwab's robo strategy for cash cost investors millions in the past six years. It's also a missed revenue opportunity for the discount brokerage, according to Backend Benchmarking's Robo Report.

Charles Schwab’s high cash allocation in its robo advice feature, Intelligent Portfolios, may have ended up costing end investors as well as the firm itself, according to a new report.

Since its introduction in 2015, Schwab Intelligent Portfolios, its automated investment allocation platform, has “carried around a 10% cash allocation,” according to the latest Robo Report by Backend Benchmarking. The “high cash allocations” have cost investors as much as $1.13 billion in total earnings, compared with a fixed income portfolio, the report states. Further, tacking on a 30-basis point management fee to that allocation would have resulted in $531 million in earnings for investors and would have increased Schwab’s revenue by an estimated $369 million, the report's authors concluded.

Schwab Intelligent Portfolios cash allocations vary from between 6% and 30%, based on the model used for the portfolio. "A cash allocation this high is very rare," said David Goldstone, manager of research and analytics at Backend Benchmarking. "It is common to see 1% to 3% cash," he added, noting that Ally has a high cash allocation in its "Cash Enhanced Portfolio," while some firms, like Betterment and Acorns, stay out of cash nearly all the time.

Other reviews of Schwab Intelligent Portfolios, including Investopedia, Betterment and even The New York Times, have also observed and criticized the high allocation toward cash favored by Schwab. In a 2015 blog post looking at Schwab’s cash allocation, Dan Egan, VP of behavioral finance and investing at Betterment, called the investing decision by its competitor “a conflict of interest” that “should raise eyebrows.”

“There exists a very real underlying cost hidden in the allocation structure,” noted Egan. “You, the individual investor, are paying a hidden fee via the cash allocation you are forced to hold.”

To demonstrate that Schwab was hoisted by its own cash petard, Backend Benchmarking built two simulations. Both invested the cash portion of the portfolio in Schwab's own fixed income funds; in one simulation, the researchers added a 30 basis point management fee, the other with no fee. Investors were better off in both scenarios when compared with a cash allocation. Since 2015, the no-fee portfolio returned a total of 4.85% over the actual results. The portfolio with the fee returned 1.99% more over the six-year period.

“Clients would have been significantly better off had Schwab charged a straightforward and transparent management fee instead of deciding to earn revenue through high cash allocations,” the report concluded.

Schwab could have been better off, too: The firm sweeps its cash allocation into Schwab Bank, where the cash deposits earn interest or investment returns for Schwab. In the first quarter of this year, the bank earned approximately 0.97% on an annual basis from that cash, according to the report. Extrapolating from that figure, Backend Benchmarking concluded that Schwab earned $185 million in revenue from cash swept out of Intelligent Portfolios and into its bank. If Intelligent Portfolios had instead opted to invest that portion of the portfolio in a fixed income allocation, the firm would have earned $554 million over the six-year period from its 30 basis point fee, given the growth in principal, according to the Backend Benchmarking.

Although it hasn’t revealed the exact details of a recent U.S. Securities and Exchange Commission probe, Schwab set aside $200 million for the investigation and stated that it was related to its robo platform. “It has been widely speculated in the media that this charge is directly related to the high cash allocations in its portfolios, although this is entirely unconfirmed and the details of the SEC investigation are not yet public,” noted the report.

Schwab declined to comment on Backend Benchmarking’s findings or the strategy behind its cash allocation.