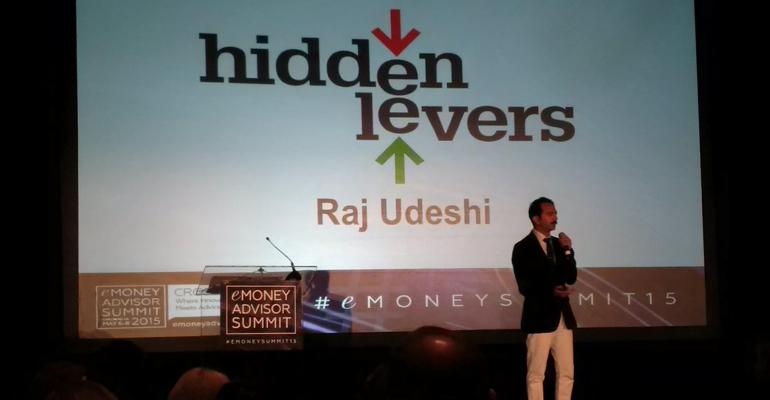 Even as the number of planning tools expands for advisors, another tech firm has built and launched a full financial planning tech offering. Long known for its stress testing, HiddenLevers is making goal- and cash flow–based financial planning available to users, WealthManagement.com has learned. An announcement is expected this week.

The feature was built at the request of two large financial institutions, said Raj Udeshi, co-founder of the firm. “We planted our flag on 'Stress Testing Island' and the rest of the past decade we have been building the bridges back to the wealth management mainland,” he said.

It took the firm just six months to make the feature, which comes with prepopulated and customizable goals, including standbys like retirement and real estate goals, as well as traveling, charitable giving, gifting and others. The feature also includes estate-planning goals, like multigenerational inheritance and directed giving objectives. The financial plans can be put through the same scenario and Monte Carlo simulations that are available to portfolio holdings inputted into the tool.

HiddenLevers’ addition of financial planning—albeit purposely-built compared with the rash of companies buying financial-planning tools in the past two years—fits into the larger trend of advisors expecting planning tools to be available out-of-the-box.

It's advisors' expectations for smooth transitions between wealth management features and overall multifunctionality that has moved from the independent space to the enterprise space, said Udeshi. “The tech that's most innovative is going to serve that [RIA marketplace]. The wirehouses and big international banks are not dumb to that.”

“We're definitely making this for the enterprise,” he explained. “That enterprise buyer, whether it's a large b/d rethinking that part of its tech stack, or if it's a wirehouse. Perhaps they're not interested in piecing together five vendors and then negotiating five separate contracts with the clunky integrations between them that might have a data loss and then people pointing the fingers at each other.”

But despite its capabilities, or at least its founders' expectations, at least one advisor is still using the tool as a complement to some of the technology already in his stack. "We've added HiddenLevers into our tech stack rather than replace other things," said Douglas Eaton, founder and CIO of Eaton Financial Group, based in Coral Springs, Fla. HiddenLevers' cash flow planning initially captured Eaton's attention, along with the accompanying PDF- and web-based reporting. Both the language and layout of information outputted by HiddenLevers is clear and easy-to-follow, he said.

Eaton's firm has no plans to cut other technology it uses, including risk evaluation provided by Riskalyze, financial planning by eMoney or cash flow modeling by TimeLine. "There's so much stuff coming out that you can't keep jumping around from thing to thing," explained Eaton, who added that he would like to see a tech stack component that truly masters data aggregation. Utilizing HiddenLevers' planning, meanwhile, is "about delivering a clear message to clients," he said. "We like the clarity of that message."