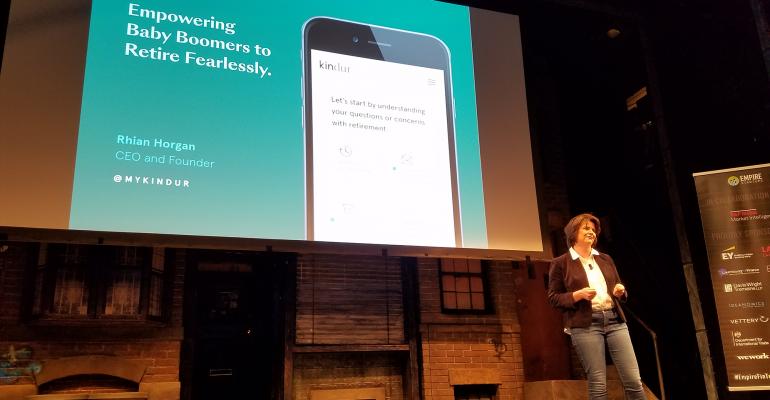 Predicated on the idea of providing retirees with a steady, reliable income source, the platform has two distinct offerings rolled into one platform: The first is a passive, automated investing feature, while the second is a no-commission fixed annuity from American Equity Investment Life. Kindur users complete a series of assessments and modules to help them understand their current retirement savings, as well as their spending, health care and Social Security situations. The investing platform uses low-cost ETFs with portfolios “designed specifically for decumulation,” according to the company.

The investing platform does not execute tax-loss harvesting but will rebalance users’ portfolios; it charges an annual fee of 50 basis points on assets under management after an initial setup fee of $149. While the annuity offering is no-commission, it has an early surrender charge of up to 9.2% of contract value within the first 10 years of the contract term. It includes its own annual fee of $250 per year, which converts to an advisory fee of 50 basis points after the user elects to receive income under the Lifetime Income Benefit Rider, with the fee decreasing as the income is paid out.

Horgan wanted the annuity feature to be straightforward and simple, but it took a lot of legwork to find the right provider. “I met with 40 insurance companies and finally found one that would create a no-commission product for me,” she explained. “If you already have 15 accounts, and you’re trying to figure out Social Security, and you’re trying to figure out Medicare—and all these other decisions—the last thing you need to decide between is five different annuities.”

“You don’t need annuities when you’re 30 years old,” she added. “Our customer is at an age where converting their savings into income squarely makes sense, so that’s why [annuities] have become part of the platform for us.”

Not all demographics have the same preferences, however. When designing Kindur, Horgan noted that clients preferred a “text-heavy” presentation of information, instead of the slides and pictures associated with platforms geared toward younger users. “This demographic loves to read,” she said. “They actually want to read and digest the information.”

Kindur is “most helpful” to a user who is planning to retire in five to 10 years, said Horgan. Users who have not yet retired can benefit from rolling over retirement accounts onto the platform, ideally saving fees, she said, and then using the “savings module.” The app will output a figure representing the funds that the user should have in place for retirement, while allowing the user to either make adjustments to his or her Social Security election and retirement age, or encourage the user to save more. For users who indicate that they have already retired, the savings module won’t appear, noted Horgan.

On the investment management side, tax-loss harvesting is under consideration for the future, said Horgan, particularly across multiple accounts. “If you think about our Social Security calculator, it allows you to plan for two. If you think about Medicare, we plan for two. Where we want to go over time is the investment management,” she explained. “We’ve taken the first step of planning for two.” Kindur joins a quickly expanding sector of wealthtech firms that are offering insurance and investing products aimed at asset decumulators, instead of the asset accumulators more traditionally associated with automated advice platforms, or robo advisors. There’s a whole wave of fintech that’s starting to look at baby boomers, noted Ben Cukier, a partner at fintech-focused growth equity firm Centana Growth Partners, in remarks made at the Empire FinTech Conference. Automated investing firms recognize that demographic already has assets and that capturing just a portion of those will “dwarf what millennials are expected to have.”

Retiree-focused automated investing platform United Income launched in 2017, and Envestnet plans to roll out a broad-market release of its Insurance Exchange in June.

Kindur is designed not so much as competition for advisors but as a platform for do-it-yourselfers nearing retirement, added Horgan. “There is going to be a large group of users that are going to want to have a human plan with them. I don’t doubt that,” she said. “There's also a large group of users that are out there on the internet DIY-ing and trying to figure it out themselves.”