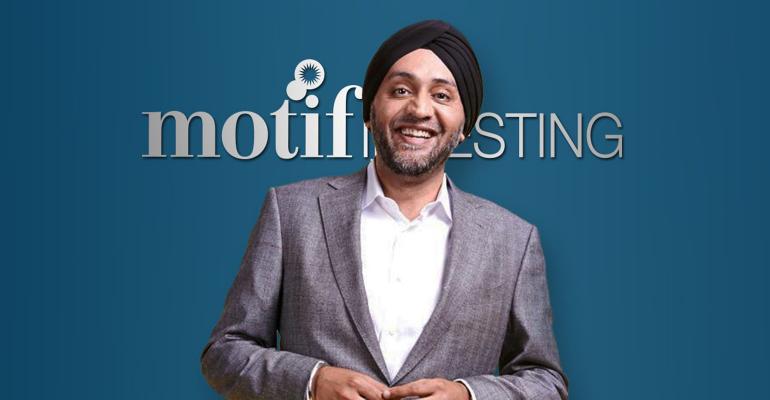 There are so many automated advice platforms out there that when another one comes along, you may be tempted to dismiss it.

But with Impact Portfolios, a fully automated investing service Motif Investing launched at the LendIt conference this week in New York, Hardeep Walia is introducing the market to something notably different from other products out there.

For starters, Impact Portfolios adds personal values into the digital on-boarding process. In addition, the usual digital questionnaire, Motif asks new users to select one of three causes – sustainable planet, fair labor, and good corporate behavior – they would like to support. Impact then removes individual securities that are in conflict with the user’s stated values.

This is where Impact Portfolios hopes to differentiate from other robos. Rather than assign investors a collection of ETFs or other pooled investment funds, the tool puts investors into “motifs,” a weighted group of stocks based around themes. While the motifs functional the same as an ETF, it gives the investor direct, fractional ownership of the individual securities and eliminates the need to buy a product from an investment manager like Vanguard.

It also lists every single security that, in addition to increasing transparency, allows Impact Portfolios investors to eliminate or replace any stock they choose with a couple of clicks. So if a company gets embroiled in a scandal that offends the investor’s personal convictions, they can remove it from their portfolio and get a recommendation from Impact Portfolios on a security to replace it.

Walia, Motif’s founder and CEO, calls it “voting with your investment dollars,” which he believes can have an even bigger impact than a boycott organized on social media.

“Trump’s election reminded all of us how important our values are,” Walia said. “Values is no longer a conversation we have amongst friends over dinner. It’s a national conversation, but how is it changing people’s investing dollars?”

According to a national survey Motif conducted, 83 percent of American investors indicated that personal values were important in making investment decisions, but 64 percent said they don’t have a clear understanding of what’s in their portfolios. More than half said they would be angry if their investments weren’t aligned with their values.

By letting investors adjust their individual securities, the robo offers a level of customization rarely offered by traditional investment managers, let alone a low-cost robo advisor. It doesn’t end there: users can set their own rebalancing frequency and tweak their drift rates.

Motif’s approach to fees is different as well. Impact Portfolios charges a flat monthly $10 subscription fee per $100,000 of invested assets and has a $1,000 account minimum. The fee covers accounts across Motif’s properties, including its online brokerage, so investors can let the robo manage their IRA account while they invest in other motifs on their own. Impact Portfolios also doesn’t charge for swapping out individual stocks, so there’s no penalty for removing a stock that doesn’t agree with an investor’s values.

“In terms of empowerment… no other company lets you disagree with the model and change it,” Walia said. “You can change the assumptions of the model. You can change anything. This will become more available as regulators look at [robo] products.”

He admits that amateur investors, which robo advisors market to, could make mistakes by setting their own rules, but it’s easy to revert back to Motif’s default recommendations. There are also some guard rails. For example, an investor can’t move 100 percent of their funds towards emerging markets, or set their drift rate above 10 percent.

Walia said the launch of the robo is a conscious push into the digital wealth market to expand Motif beyond its online retail brokerage and partnerships with Goldman Sachs, U.S. Banks and JP Morgan.

“The model of every fintech company is to do something big companies can’t clone,” Walia said. “We wanted to launch a product that’s very, very hard to replicate… built on the principles with which we started the company: empower investors, transparency, and change what you don’t like.”