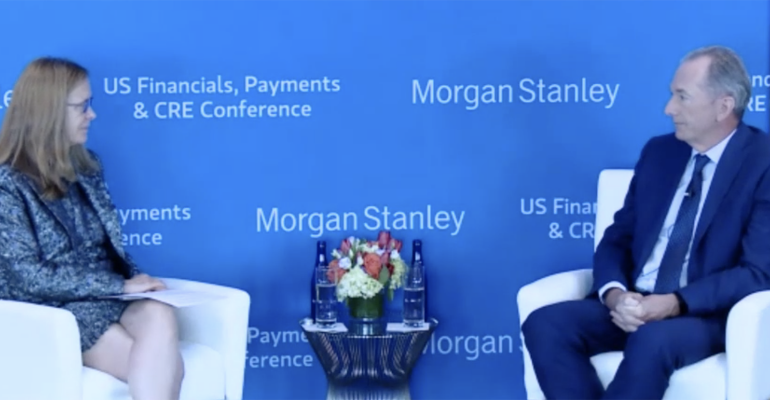 Morgan Stanley is broadening its approach to wealth management with E*Trade providing inroads to new markets, like workplaces and legions of self-directed investors.

Five years into the launch of its “modern wealth strategy” Morgan Stanley executives told a group of conference attendees Monday how the firm is midway along a path toward leaving behind the “too narrow” label of wirehouse and coming into more direct competition with “a certain West Coast direct player.”

The firm made some major acquisitions during the pandemic, starting with a $13 billion all-stock takeover of E*Trade, followed by a $7 billion cash-and-stock purchase of Eaton Vance Corp. After carving out and unloading E*Trade’s RIA custody business to Axos earlier this year, executives at the 2021 Morgan Stanley U.S. Financials, Payments & CRE Conference offered a roadmap for how E*Trade’s technology, personnel and business lines will fit with Morgan Stanley’s wealth management vision.

Morgan Stanley’s E*Trade acquisition is all about having multiple growth opportunities, said executives. New clients used to come to the firm via advisors. That is no longer the case, with workplace and self-directed business lines set to bring in new clients and provide additional marketplaces for the firm’s lending and alternatives products.

“Historically the only way we were able to attract clients through our advisory platform was through the advisors themselves, who were obviously limited in how many prospects they could realistically generate and cultivate given that they also have a book of clients to serve,” said Andy Saperstein, co-president of Morgan Stanley and head of Morgan Stanley Wealth Management. “Now, we have the ability to source new client relationships through the workplace and through E*Trade’s self-directed platform.”

In addition to the troves of self-directed investors at E*Trade, the firm also has a U.S. stock plan business that is being combined with Shareworks by Morgan Stanley, a provider of public stock plan administration and private capitalization table management.

“The E-Trade deal has been a home run on so many levels,” said James Gorman, chairman and CEO of Morgan Stanley. “It's giving us direct access [to new clients]. The combination with Solium [now called Shareworks by Morgan Stanley] and the workplace space has been a complete dramatic success.” The integration of Eaton Vance’s business into the firm is still ongoing, he said, but is on-track to bulk up the bank’s asset management arm.

“We're going to be compared over the next five years to a certain West Coast direct player that's done a phenomenal job—the kind of growth they've got—[compared with] our traditional wirehouses,” Gorman added, apparently alluding to Charles Schwab. “That’s not a pitch; it’s real.”

Morgan Stanley has effectively turned around its business with a combination of acquisitions and tech investments, said Gorman, with four aspects driving growth: the wealth management platform used by advisors, an attractive workplace, low advisor attrition and investments in new technology. “We used to have high attrition, no attraction, no technology, no E*Trade, no workplace [strategy],” he said. “We've figured all those out.”

“It’s not an inaccurate depiction by any means,” said Dennis Gallant, senior analyst at Aite Group’s wealth management division. Morgan Stanley’s description of a turnaround story resonates, he said, as the firm has added new capabilities and innovated with existing technology to attract and serve more clients at a younger age. Just days ago, Morgan Stanley received Aite Group’s 2021 Digital Wealth Management Impact Innovation Award in the category of Digital Client Engagement for an interface it built on top of BlackRock’s Aladdin risk management tool.

The lines between channels are also blurring, adding to the competitive mix, said Gallant. “It's accelerated in the past year-and-a-half. What does a wirehouse mean? What does a discount broker mean? What is an independent [broker/dealer]? All firms are moving into providing advice across age and wealth tiers.”

To be sure, Morgan Stanley isn’t the only firm transforming itself. Merrill Lynch has made major improvements to its wealth management platform and Goldman Sachs is providing services for independent advisors and small investors.