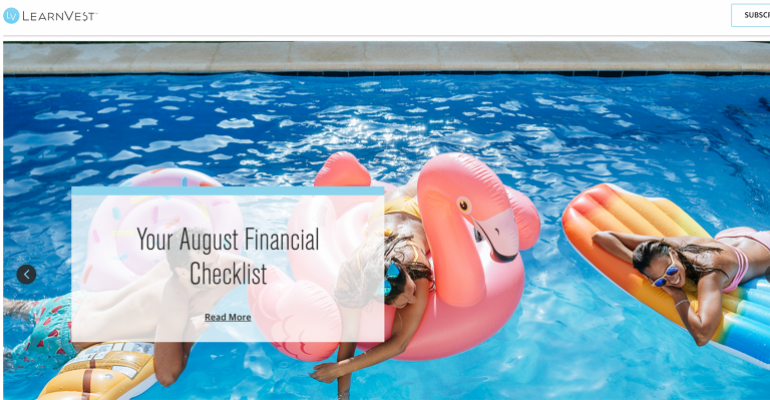 LearnVest Wakes Up from Hibernation

The financial planning outfit announced a shutdown and overhaul in May.

LearnVest quietly relaunched as a “free financial education” site this month, marking the beginning of its new role as a content generator. The relaunch comes after the June 5th closure of the site’s online tools and financial planning offering, replaced with a subscription to a twice-weekly newsletter of “handpicked” articles.

When Northwestern Mutual Life Insurance Company announced the closure of LearnVest’s financial planning offering in May, the company noted the decision was in line with consumer demand for a more holistic planning experience. “This move will allow us to focus resources and leverage of Northwestern Mutual’s established nationwide network of financial advisors,” the company said in a statement at the time, “using the cutting-edge planning platform and digital tools that we’ve created together.”

The rebranded site is a return to the company’s roots, said Northwestern spokeswoman Betsy Hoylman. The new LearnVest is designed to “educate and empower people who are at the start of their financial journey.” The insurance giant acquired the start-up for a reported $250 million in 2015.

Northwestern executives were enthusiastic about the site’s rebranding at the time of the announced closure. “When I met the LearnVest team, I knew they had the talent and digital chops to help us give consumers what they need,” said Christian Mitchell, CEO of Northwestern Mutual Wealth Management, one of the key players in the LearnVest acquistion. “Three years later I can say the acquisition exceeded our expectations.”

For some, the 2015 acquisition may conjure comparisons of other acquisitions of fintechs by established players, like Principal Financial Group’s purchase of RobustWealth, valued at no more than $46 million, or TIAA’s acquisition of MyVest for an undisclosed sum. Those comparisons are misguided, said Alois Pirker, research director at Aite Group. LearnVest was less of a platform and more of a front-end tool, he said.

Meanwhile, Northwestern is bullish on their vision for the company. By May it had tripled the size of LearnVest’s New York City office, Hoylman said.

“There is clear energy for our future direction,” Mitchell said when the closure and rebrand of LearnVest was announced. “It’s rewarding to see an office grow from an early-stage start-up to a partner in innovation for a Fortune 100 company.”