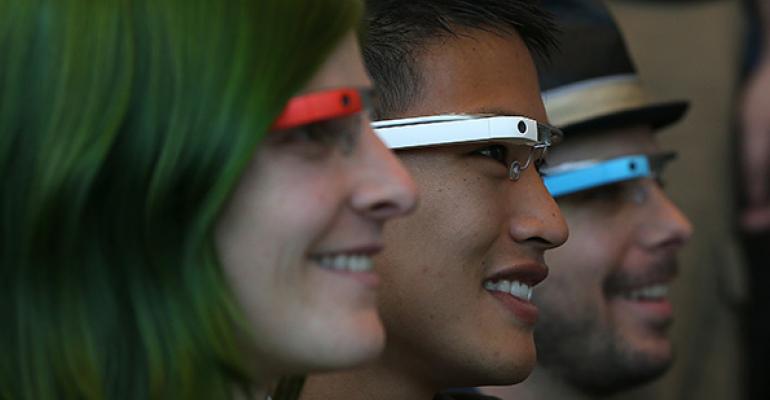 How Wearables Could Shape Financial Services

Hadley Stern, vice president of Boston-based Fidelity Labs, remembers when Fidelity launched its first iPhone app—long before the firm knew whether iPhones, or even smartphones, would take off. History has proven that point. But the believes businesses are at a similar point with wearables. Google Glass and the Pebble watch are now available. But mass adoption is far from a given—yet.

“Five years from now, there will be a broad use of wearable tech,” Stern says. “Whether that’s a watch, glasses or contact lenses? It’s likely going to be more than one device.”

Just as iPads have, wearables devices are also expected to cross the barrier from the consumer to the business world. They are projected to make $6.2 trillion by 2025, according to consulting firm McKinsey.

Not many businesses are using the devices yet. But those in financial services, from firms to analysts, are taking a close look at how wearable devices could be adopted by both advisors to enhance the way they work and consumers looking to streamline the way they interact with the financial companies in their lives.

Wearables are digital devices, meant to be attached or worn on the body. Unlike a handheld device, these tools can sometimes be controlled hands-free through voice or just by transmitting data on their own. These devices aren’t as robust in their computing power today as a smartphone or tablet, so they aren’t meant to replace these devices but to be used in tandem.

In the financial services world, it would function as a small piece of hardware that transmits or sends data about the user to a company or program, helping them to receive better service, or quick access to information.

“Let’s talk about banks in Europe wanting staff members to recognize a high net worth individual when they walk in,” says Serge van Dam, the international segment leader of digital channels at financial services tech firm Fiserv, based in Wellington, New Zealand. “Obviously this is not imminent, but you could see someone with glasses seeing the balance of a customer, and making that interaction more personal.”

Van Dam is exploring technology that can enhance the experience of a younger professional, who has an expectation of a digital experience, and also has a higher net worth. Where so much of financial services has gone online, with standard features for all, having a higher-end experience delivered to a higher-end client can be beneficial for the customer.

“People want a high-level of hand-holding and personal touch, which is typically how the wealth management industry has sustained itself,” he says. “You want to make them feel the digital experience is a premium service. So I think the key challenge is how do you get customers to feel like they that have premium in a digital relationship?”

Fidelity is one company looking at how wearables could affect their customers. The firm has released apps for both Google Glass, as well as the Pebble watch. Right now the experience is slim. The Glassware app allows users to get a market card, with closing prices, at the end of each trading day. The firm is primarily viewing the release as more of an experiment, to get feedback on how people engage with the program for further releases down the line.

The Fidelity App for Android can now connect to the Pebble watch and also allow users to see stock prices of securities they want to follow. Fidelity’s Stern won’t release numbers in terms of actual users or their experience yet. But he concedes that Google Glass, in particular, may not be the breakout device for wearables, as smartphones were for handhelds.

Right now most eyes are focused on Apple and its presumed iWatch, which could be released in October, rumors say, with everything on it from a curved screen to a sleep monitor. Even though Apple has never mentioned a smart watch (although it has reportedly been trademarking the name in countries), some believe Apple will be the one to introduce a breakout device for the business world.

“There were MP3 players long before the iPod,” says Stern. “But those didn’t bring together the software and hardware user experience. Pebble Watch and Google Glass hint at something in the future, but they’re not scaled.”

Still, both of these wearables are in Fidelity’s Office of the Future, where advisors can get a view of how the firm sees technology embedded in their workday down the line. Fidelity’s instinct is that wearables will offer quick alerts for information—similar to a smartphone—but with an easier interface.

“The trend is towards more alerts, and more push notification on wearable devices,” says Ed O’Brien, senior vice president and head of platform technology at Fidelity Institutional. “You may not want a full performance report. But you want to know if there is something that needs attention. So do I need to call the home office or can I make a decision now?”

The price of such devices, however, could be a concern. KGI Securities Analyst Ming-Chi Kuo has reportedly written that the iWatch alone could cost upwards of several thousand dollars.

Google Glass is $1,500, including the pair of prescription glasses that are in the titanium frame. (The $225 frames or $150 sunglass lenses are also currently being tossed in for free to new Glass buyers.) A Pebble watch costs $249, and the Samsung Gear Live, powered by Android Wear, is $199.

Will business users be willing to pay four figures for one of these devices? Three figures seems more likely, and more in line with current prices for tablets and smartphones. In addition, a watch has a more familiar interface than a device worn across the face that can both capture your image and flash your data at the same time.

“We have a societal convention for wearing a watch,” says Fidelity’s Stern. “People notice Google Glass.”