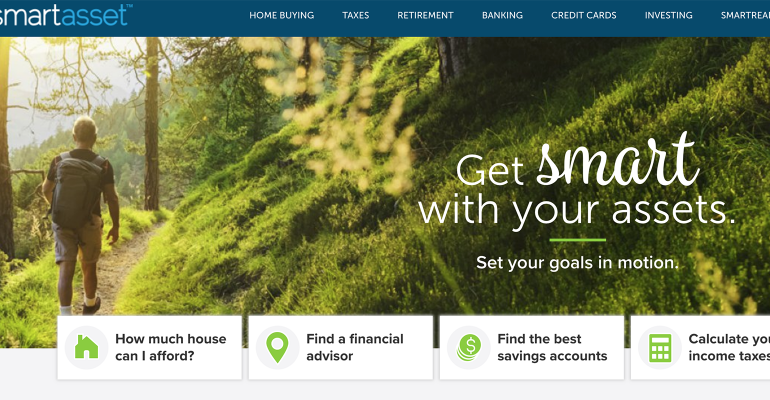 SmartAsset has raised a total of $51 million, and plans to use the new capital to grow its SmartAdvisor tool, a digital client-lead generation service for advisors.

Focus Financial Partners, a high-profile wealth management firm that recently filed for an initial public offering, led a recent $28 million fundraising round for SmartAsset, which plans to use the investment to grow a fast-growing, client-lead generation tool for financial advisors.

The latest Series C round of capital brings the total raised by SmartAsset to more than $51 million.

SmartAsset Founder and CEO Michael Carvin said his company was not planning on raising additional money until later this year but that inbound interest from investors was “significantly oversubscribed.” Javelin Venture Partners, TTV Capital, IA Capital, Contour Venture Partners, Citi Ventures were among others who took part in the round of funding.

SmartAsset is a portal for consumers to access information on mortgage rates, credit cards and a host of savings, retirement and other financial planning calculators, as well as an easy way to search for advisors.

Carvin declined to share how much Focus contributed to the $28 million invested but he said, like most lead investors, it put up the largest share of the capital. He also said it was both a strategic and financial investment focused on returns.

The new capital will be used to continue to build SmartAsset’s new product platform of personal finance tools on its website, which Carvin said more than 45 million unique visitors used in May. But it will also be used to grow the sales team centered on recruiting more financial advisors to use the company’s SmartAdvisor digital lead generation service.

Financial advisors can enroll in SmartAdvisor at no cost and then choose how many prequalified leads they receive each month. Each lead of an investor with $1 million or more costs $190. Leads for investors with between $250,000 and $1 million cost $90.

In April, Carvin told Wealth.Management.com that about 30 percent of the investor leads generated have more than $1 million and the average investor has $780,000. Of all the leads, about 70 percent don’t currently have advisors.

Carvin would not disclose the number of advisors using the platform, but said the it’s generating thousands of leads each month and he expects that number to grow to “tens of thousands” by early 2019. In January, there were leads for investors with an aggregated $4.5 billion in investable assets available through the platform.