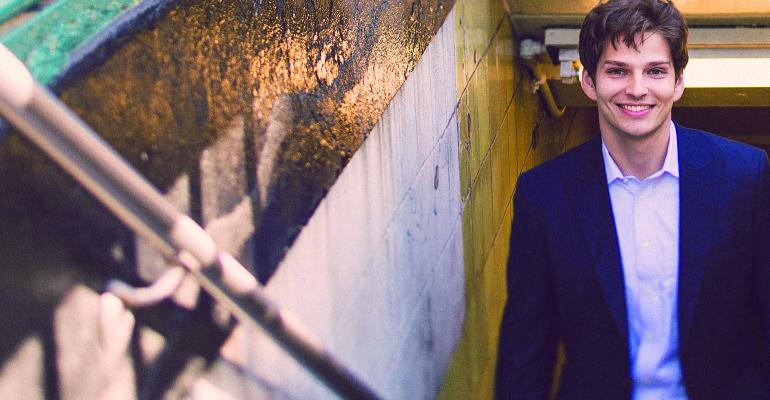 Alexey Sokolin founded NestEgg, an early robo advisor and digital wealth management platform, in 2010 along with fellow graduates of Columbia’s business school, then sold the platform to Vanare where he is now chief operating officer and product strategist. But he’s better known for what some call “mind-blowing” presentations on the future of wealth management, the kind delivered at industry conferences and generate discussions, and arguments, all the way through the after-party. We asked him where the future of technology and wealth management is headed.

WealthManagement: You’ve described yourself as a futurist as well as a technologist. How did you find yourself here?

Alexey Sokolin: I got into the industry in 2006, when I joined Lehman Brothers in their investment management division strategy group.

We had a custody fee project to figure out the smallest profitable client for that business and how to get rid of clients that fell below that line. As a 23-year-old with no savings and no income at the time, that was just weird for me. I kept that with me as one of the seeds for creating NestEgg in 2010.

If I get to pick an alternate persona, it’s actually an artist. I have a little bit of a weird personality. I’ve done a lot of finance stuff, but as a kid, I always painted and drew and illustrated and I’ve done a lot of abstract art. My interest in art became an interest in design, and if you want to make some money in the 1990s as a kid, you should’ve been doing web design. Web design is how I went from the visual arts to technology.

That went on hold for a couple of years while I was at Lehman. Once I got out and started working on the company, that personality really came through again.

What technology will have the biggest impact on the wealth management industry over the next 10 to 15 years?

The one that solves for the intergenerational wealth transfer. Putting millennial solutions like robo advice together with the traditional platforms, and having it live and communicate and be one thing so there’s not this huge schism between the old and new. Getting that right is transformational. It will make enormous winners of the firms that are able to navigate it, and completely decimate the practices that are not.

Some on Twitter call your presentations “mind-blowing.” What are you trying to accomplish?

Technology is accelerating much faster than people can learn about it. Your phone can recognize every single object in your photos and people say ‘oh, that’s a cool feature.’ But they don’t track just how much incredible technology went to get to that point. In order to just simply tag your cats, there’s a robot that has been taught over millions and millions of Google images what a cat is and how it’s different from a dog or a tiger. The raw challenge of that is mind-blowing.

I connect that concept to what the advisors in attendance are doing.

But how could a financial advisor possibly incorporate a technology like image recognition into their practice?

For every individual, everything they take a photo of is like a real-time Facebook “like.” Now you know for this person everything that is different about them in terms of what they like relative to every other person. So you have a preference graph of every single thing this person sees and prefers. Is that better or worse than a five-question risk questionnaire?

Of course there’s a whole set of privacy concerns and regulation concerns and all that stuff, but let’s imagine that away. Now an advisor can provide a service that is so extremely customized based on a behavioral point of view. Let’s say someone has a daughter, the advisor gets a ping that says, “Your client had a daughter. Maybe you should start a 529?”

That’s a little creepy to think about, but that technology is here. Once the robo advisor thing is done, the next generation of companies that’s going to compete with us will have these things.

Can you give an example of how an advisor can actually incorporate this into their day-to-day practice?

A really simple one would be using IBM Watson using semantic analysis to get a client profile. Let’s say you’re an advisor and you’re using a platform for client management and you’ve plugged in LinkedIn, Twitter and whatever other social networks are enabled.

Before you go and meet a client, you run analytics on the communication you’ve had with the client. You have a robot that knows how to understand the words used, separate the grammar. It creates a profile of that client and you understand the personality before you even talk about risk with them. Or maybe you have emails from the husband and the wife—you can figure out who really makes decisions based on the tone and the language and how they communicate. And you do that over long stretches of time, with all of your client communication. If the performance has not been good, you can profile the relationship in the data and track potential outcomes.

And knowing this could influence product decisions and how to sell them?

Yes, exactly. That second part is really important. It can influence what conversations you have with a client.

A human can manage maybe 50 to 100 relationships. After that it doesn’t work. That’s part of the scaling issue, and that’s part of what the robo advisor has solved.

In the same way, this would let you have better, more targeted conversations. You’re not wasting your time. You know in advance what you should be saying. Maybe it’s not 100 clients. Now it’s 200.

You’ve talked about wearable technology, but are things like smart watches really going to have an impact on wealth management?