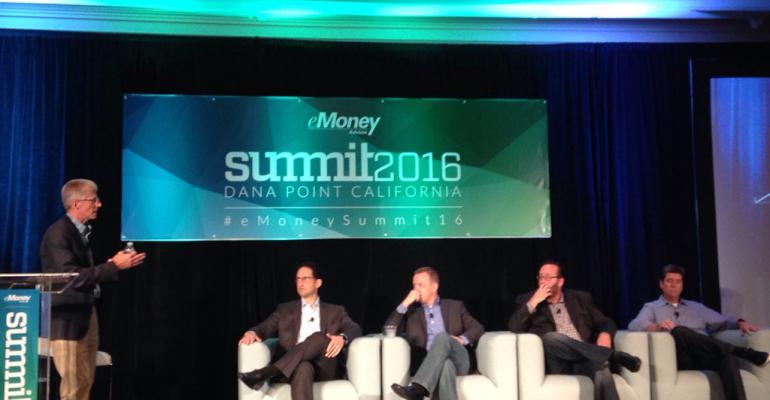 If advisor technology firms competed over advisor dashboards and client portals in 2014, and for control over the advisor integration hub in 2015, the arms race in 2016 is to help advisors comply with the Department of Labor’s impending fiduciary rule.

Look no further than eMoney Advisor’s annual summit for proof. The big story in 2015 was eMoney’s focus on supporting third-party technology through the emX dashboard, highlighted by a new integration with MoneyGuidePro. And while the official theme of this week’s summit in Dana Point, CA, is “experience matters,” “compliance matters” might be more accurate.

The Radnor, PA, based technology firm announced new products and enhancements in the areas of client onboarding, planning tools, advisor marketing and advanced analytics that Drew DiMarino, eMoney’s executive vice president of sales, said all tie together to create the “Fiduciary Framework” – which eMoney says is the industry’s first fiduciary-focused planning platform.

“While we have these additional parts and pieces that we’re bringing out that will stand along on their own two feet with great power, what’s really exciting about it is how everything is integrated,” DiMarino said during a media session at the eMoney summit.

For example, improvements to the branded marketing campaign include new compliance-approved content (like videos voiced by Rob Lowe) that advisors can add to their digital outreach programs, and a new lead generation tool which generates a goal-based planning widget to an advisor's website. Upon completion, prospects request a consultation and automatically get added to an advisor’s list of prospects. Advisors can also produce the records which can show regulators that they have been working in the client’s interests, and not their own, according to the firm.

DiMarino added that improvements to the onboarding process, where clients can sign themselves up would help advisors with the scale they need in the post-DOL world. EMoney will also include one-click delivery and archival of Best Interest Contract Exemption (BICE) forms and new analytics to help home-office administrators identify trends or gaps that may run afoul of DOL rules.

Finally, eMoney is planning a comprehensive solution that will monitor and archive key interactions between clients and advisors, including client event logs, firm-level presentation review, and client acknowledgements.

Lisa Graham, a product manager at eMoney heading up the new analytics product and compliance solutions, said advisors are looking to simplify their technology roadmap because the DOL makes it too challenging to manage information across multiple systems.

“Where eMoney’s integration can really help with that is one system, it’s all together. Overlay analytics and a compliance solution on top of a fully integrated system, and you have complete picture all in one package,” Graham said.

The improvements to onboarding and analytics are coming in November, while the compliance solutions and one-click BICE delivery is coming in early 2017, “before the April DOL rule deadline.” The lead generation tool doesn’t yet have a planned release date.

EMoney isn’t the only technology company pivoting towards DOL compliance to attract advisors. Just a couple recent examples include LPL adding HiddenLevers to its affinity program earlier in September as a DOL solution for its advisors, and Salesforce integrating its Shield product into the Financial Services Cloud.

But DiMarino and Ed O’Brien, eMoney’s new CEO since March, said eMoney is still a financial planning company at its core.  Improvements are made with improving the advisor’s experience with the tool and ultimately the client’s experience working with an advisor, and those goals just coincide with what the DOL wants. For example, O’Brien said logging and tracking every change made, whether by the advisor or the client, was a feature eMoney considered “nice-to-have;” the DOL just made it “must-have.”

“Our roadmap aligned really quite well with what DOL is asking of the advisors anyway,” O’Brien said. “Our client site has always been, from the beginning, trying to engage clients in a better experience [through] technology. It just so happens DOL is coming on saying the better job you can do getting information to your client on regular basis, make sure it’s secure, make sure it also stored, just happens to be sort of a by product of something we’ve already been doing.”

EMoney also shared more detail about integrations planned with Fidelity, which acquired eMoney in February 2015. Fidelity clients’ information with be automatically added to eMoney, and clients will be able to see all of their information with both the advisor and Fidelity in on portal. They also plan to integrate Fidelity’s vault to securely store documents.

This may off put independent advisors still worrying that they’ll lose access to eMoney if they refuse to move assets over to Fidelity, a fear that persisted among some of the Summit’s attendees despite repeated assurances from both companies that eMoney will remain independent.

O’Brien admitted that at first, Fidelity advisors will enjoy greater functionality with eMoney, but that’s the just nature of integration.

“You look at your roadmap, you prioritize, and our hope, and I ask very much for the support of our clients in the audience, is that we get other custodians who are willing partners,” O’Brien said. He also noted that Albridge, a Pershing company, integrates with eMoney and is at the summit. “I think most of us understand in this sort of ecosystem that custody and clearing is just one element of a financial advisor’s set of needs. And that technology more and more has to come from different advisors.”

So O’Brien repeated one more time, with feeling:

“There is no change in the strategy of eMoney remaining an independent company… Our position is that we are open platform and we are, quite frankly, custodian agnostic.”