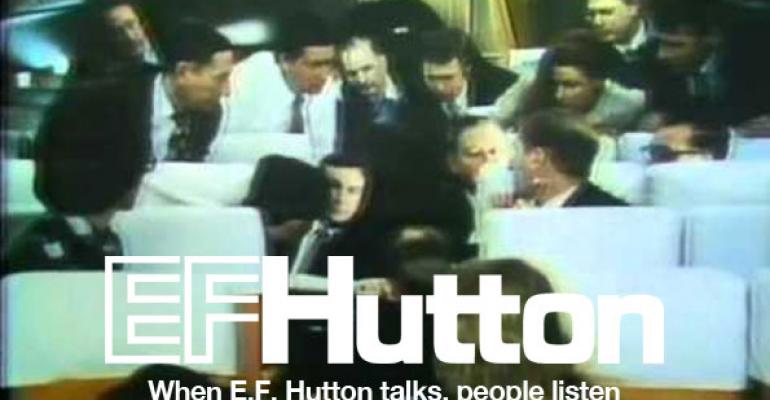 Since the one-time storied brokerage was acquired in 1987, EF Hutton has tried to reinvent itself several times. The firm attempted a comeback as a brokerage in 2012, which fizzled out, and again last year with a new management team and the launch of a web-based lead generation service for advisors called Gateway.

In its latest attempt, the company has gone live with its new website Wednesday morning. In a statement, the firm said the new platform would provide “automated financial services for clients 24/7 and with customized services.”

There’s little information as to what this new website will be, and requests on Tuesday for more information from CEO Christopher Daniels went unanswered.

According to the business overview in the firm’s SEC Filings, the consumer-facing platform will provide financial products, including trading and investments. It’s not yet clear if EF Hutton is developing a digital allocation ‘robo’ strategy, but it sounds like a possibility.

As of 9:30 a.m. eastern Wednesday, the website had little information about its services for individual investors, except, "We are developing services to assist individuals, directly and, in some cases, in partnership with other financial firms," and "Stay tuned as we introduce more innovative services."

The sparsely staffed company recently moved its headquarters from New York City to Springfield, Ohio., a move meant to appeal to Main Street investors. Many Hutton family members were born in Ohio, said Stanley Hutton Rumbough, chairman of EF Hutton and grandson of the founder. The firm plans to hire over 400 employees over the next five years, according to a press release announcing the move.

In March of last year, the firm introduced a web-based lead generation service called Gateway, meant to connect consumers with independent advisors, as well as accountants, estate lawyers and insurance agents, who would pay to be listed on the service. ​The SEC filing said the service was operational.

EF Hutton America, the parent company of EF Hutton Financial, was established in 2007 and started trading publicly in the over-the-counter market in 2014 under the ticker HUTN, though it is thinly traded. As of May 2016, it had about 51 shareholders.

In a May SEC filing, the company said it would no longer be a reporting issuer to the regulator, although its shares continue to be quoted under a different tier of the OTC marketplace.

“After careful consideration, the Board of Directors concluded that the costs associated with operating as a reporting company, and the attendant demands on management time, are not justified by the limited benefits,” the filing said. “In that regard, in the last six months, the volume of trading in the Company’s common stock has declined significantly, the public market has not provided shareholder liquidity for any meaningful volume of stock, and the stock often has not traded at all.”

The company's most valuable asset is currently its name. In recent SEC filings, the company valued the brand at a little over $10 million.