Edmond Walters Shows Off Progress of Some 'Unfinished Business'

Apprise Labs' legacy and estate tools are demonstrated by an animated Walters in front of an eager group of advisors at Envestnet conference.

A group of the nearly 3,000 attendees at Envestnet’s 2019 Advisor Summit in Austin, Texas, got a preview of Apprise Lab’s estate and legacy planning tools, which are expected to enter beta testing next month. Among the application features demonstrated were Retirement Income, Lifestyle Studio and Legacy Studio, alongside a Balance Sheet readout. The tool integrates with Yodlee, comes with slick marketing videos that can be branded for individual advisory firms and includes voice-overs from stars such as Game of Thrones’ Peter Dinklage.

This is Apprise Labs’ second major demonstration of the tool, following its announcement at T3 in January. The first major demo was on April 29 with Carson Group founder and CEO Ron Carson and his team, said Apprise Labs CEO Edmond Walters in an interview with WealthManagement. Advisors at Envestnet’s conference also had a chance to kick the tires, interacting directly with the fintech’s engineers.

Improvements at data aggregator Yodlee over the past year had made Walters more confident in his partnership with Envestnet, he added. “I would never have integrated with Yodlee 10 months ago. You guys are going to be OK,” he said, speaking to a room of advisors and home office professionals. “I am now confident that we'll be OK with that. And Tamarac is a very good company.”

The suite currently revolves around three features. The Retirement Income feature includes toggles for switching on and off various income sources, along with a drilldown that displays a month-by-month breakout of where income comes from. Along with an Envestnet | MoneyGuide integration, the tool integrates with a pre- and post-tax tool built by Envestnet that looks at every holding in a portfolio. “It is one of the best tools in the whole industry,” said Walters, of the Envestnet tool. “But it took me forever to find the damn thing,” he said indcating how buried it had been within Envestnet's interface and that its days of obscurity and underutilization are over as it has a fairly significant role in the new Apprise offering. The Retirement Income feature of the Apprise tool transfers data via voice-over from the Envest tool using the application programming interface, and then the new tool is able to toggle between its display and the Envestnet portfolio breakdown display. 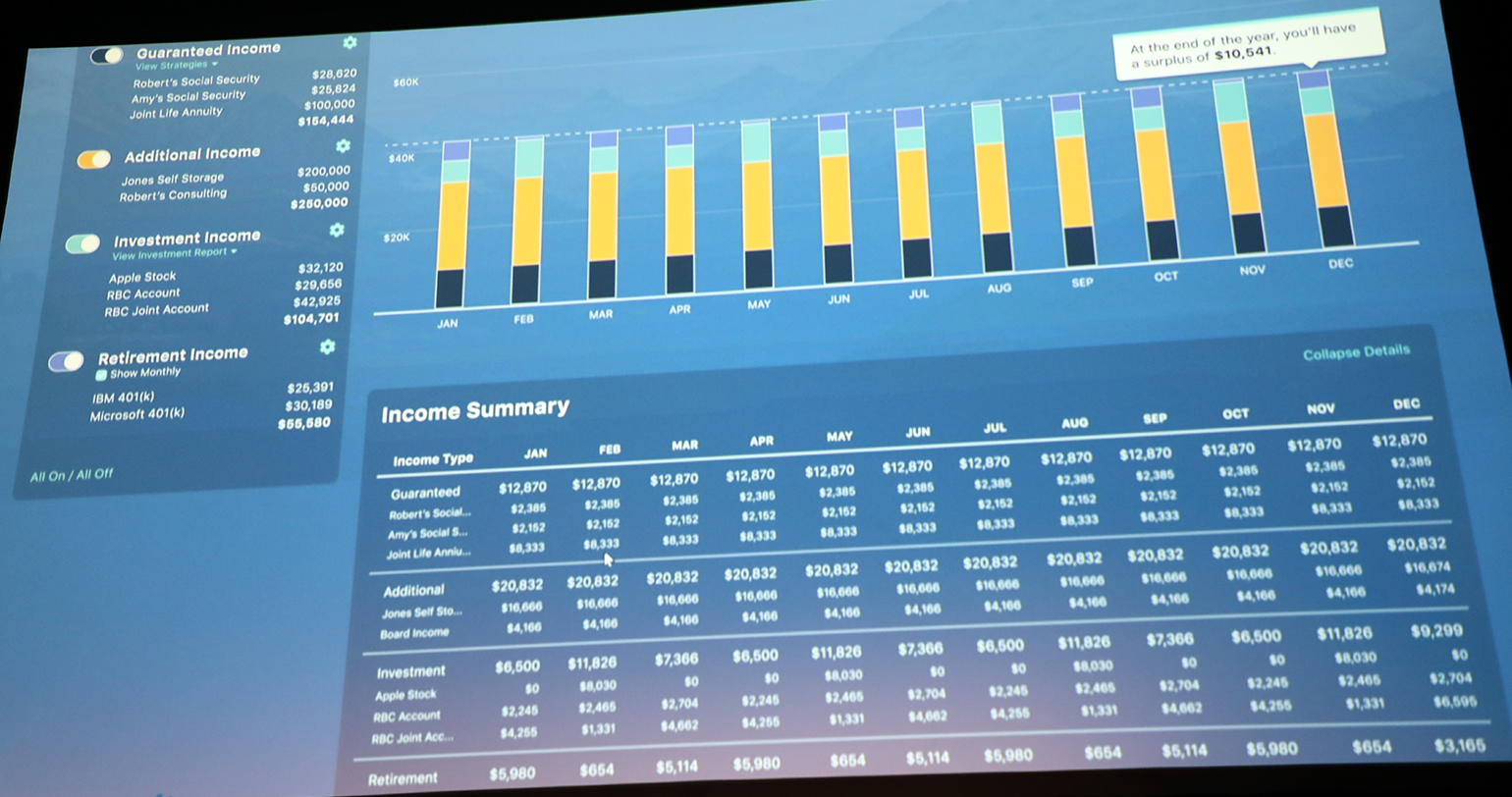 The Lifestyle and Legacy Studios are really where the financial advisor has a chance to shine, said Walters. Both of the tools include features intended to spark conversations between clients and the advisor, he added. Lifestyle Studio includes a portfolio value readout, along with a Monte Carlo-based probability-of-plan-success indicator. Virtual toggle switches in the interface allow clients and the advisor to explore customized scenarios, such as downsizing a home, gifting money to children or being hit with expensive medical bills. Each scenario takes assumed inputs from the client or advisor and maps them into the future value of the portfolio.

If a scenario ends up having an unwanted impact on the portfolio, a list of autogenerated suggestions can be used instead. In the example provided by Walters, a gift of $100,000 to a child might be reduced to $50,000 or $25,000. Moving between those scenarios, the portfolio value is automatically updated and displayed, with the probability of success reflecting the changes as well. “As an advisor, you do that and you had a lot of life lessons right there,” said Walters. Getting clients to participate and take ownership of their financial plan is key to the Lifestyle Studio, he added.

The Legacy Studio gives clients and their advisors an impetus for having the sometimes-tough conversations about inheritances, among other points of estate planning. The feature includes a tool for evaluating the need for creating a trust and addresses topics like how assets flow at the time of a spouse’s death. “The person that brings those discussions to the table and who has that discussion with Mom and Dad is the person that's special in the planning business, and is greatly appreciated by the spouse,” explained Walters. 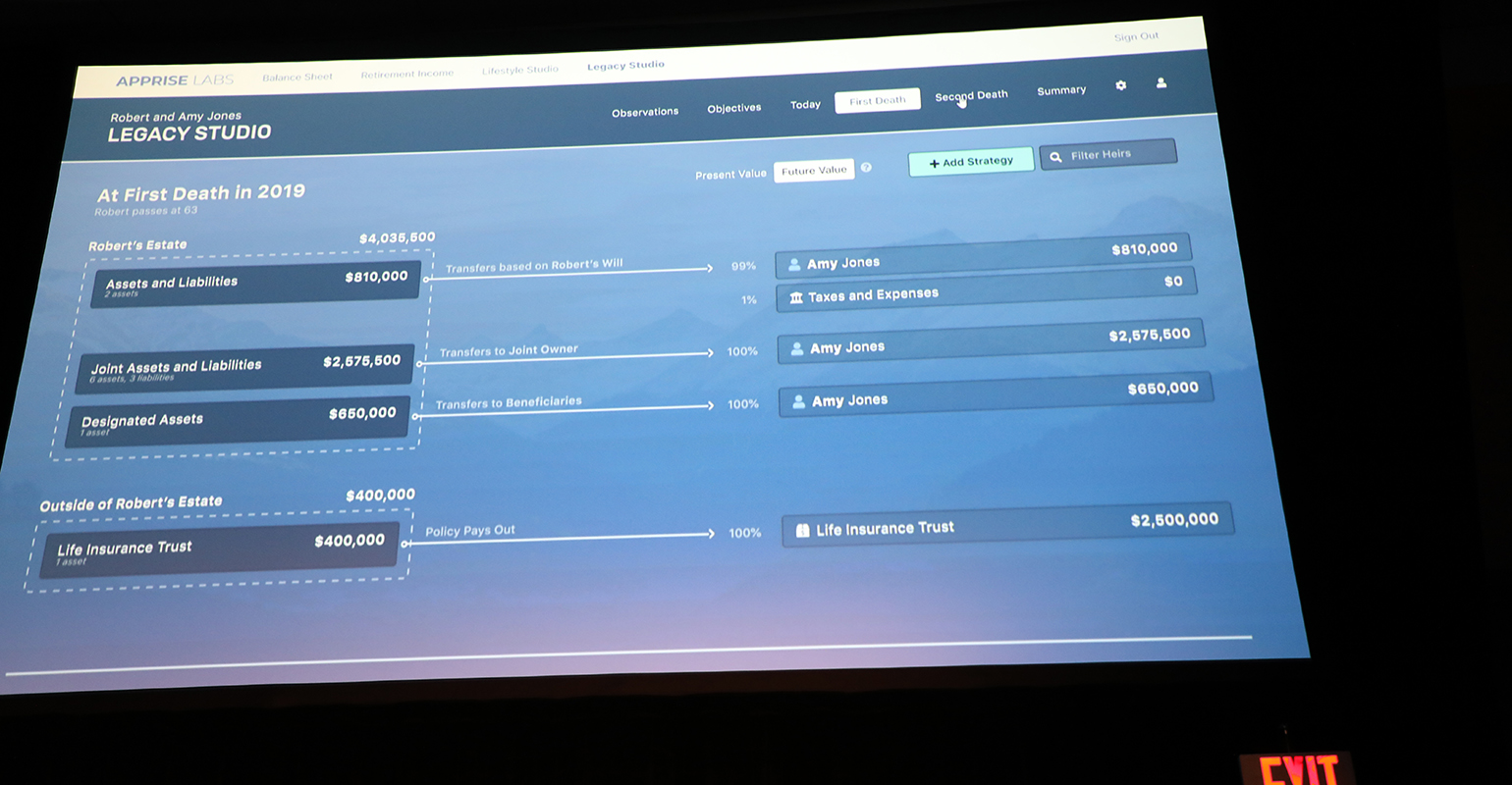 The Legacy Studio was a way for Walters to complete unfinished business from his eMoney days, he said. There were two tools, one that allows clients to equalize assets distributed at the time of the second spouse’s death and the other that evaluates a need for a trust that he “always wanted to build.”

The tools behind Apprise Labs’ estate and legacy planning, particularly the Legacy Studio, are personal for Walters. “I have 10 brothers and sisters,” he explained. “My parents could’ve used this.”

If all goes to plan, advisors will get a chance to use them by September when the tool is broadly available, he said.