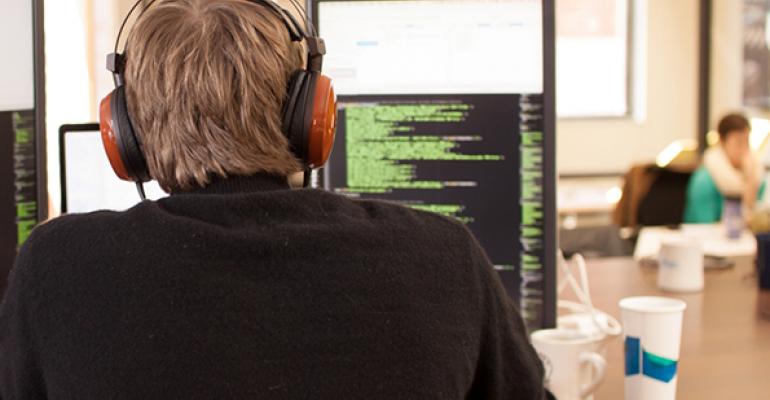 Spaces where advisors can share common rooms, or get private offices of their own, are a growing alternative.

With two young sons, plus a 6-year-old Boxer, Kona, at home, PJ Wallin knew he couldn’t set up shop on his kitchen table. Instead, Wallin chose to rent a co-working space when launching his Richmond, VA-based firm, Atlas Financial (http://www.xyplanningnetwork.com/advisors/pj-wallin-cfp/). At first he turned to a more traditional set up—an office with four walls and a receptionist—nearly falling asleep everyday. So when two buddies launched Gather RVA (http://gatherrva.com/en), with monthly Happy Hours, Wallin agreed to pay $405 a month for a private desk and parking spot.

“Happy Hours are a marketing opportunity,” he says. “And everything I use in the cloud.”

Today, many independents are turning their back on formal offices—or even one at home. Soft music, with wall-to-wall carpets feels out of tune to their needs, as does the isolation of working from home. Co-working spaces, where advisors can share common rooms, or get private offices of their own, are a growing alternative. Technology supports these choices easily with cloud-based storage for documents, wifi, the adoption of smartphones and virtual meeting apps.  When advisors do want the option to meet face-to-face with clients, most spaces offer conference rooms, coffee and occasionally free beer.

From WeWork (www.wework.com) to NextSpace (nextspace.us), these options have expanded quickly. WeWork along has offices in 15 cities and four countries including the Netherlands and Israel. Co-working memberships in the United States grew 117 percent from 2012 to 2013, with the number of spaces up 83 percent in the same time period, according to the Commercial Real Estate Development Association, a Herndon-VA-based members organization that follows this trend. (https://www.naiop.org/en/About-NAIOP/News/NAIOP-News/2014/RF-Coworking-Spaces.aspx)

Drew Weckbach, MST, CFP®, (@DrewWeckbach) signed up for a co-working space with the St. Louis, MO.-based T-Rex (downtowntrex.com) to launch his financial advisory firm, Scaling Independence this year. His favorite perk? Access to other “other boot strappers like myself,” he says. Paying just $50 a month, Weckbach also makes use of free Lunch and Learns, where he’s listened to presentations on coding and website design, and enjoys the pour over coffee bar, plus a stocked bar, courtesy, he says, of St. Louis-based Anheuser-Busch.

Aaron Hatch took a little more of a traditional route when renting a co-working space. He opted to cohabit with an architecture firm near his home in Redding. CA, that has a private conference room he can book, access to wifi, and a fee of $100 a month. When he first launched his firm, Woven Capital (https://www.facebook.com/WovenCapital), he met with prospects at local restaurants.

“But at one of my first meetings a client said, ‘This is weird talking about financial issues in a coffee shop,’” he recalls. “So I knew I had to find another spot.”

Wallin likes the mix of other startups he meets at Gather RVA, from real estate developers to sound producers who do music for ad spots. He also appreciates having access to a full kitchen, a mini cross fit-styled gum and even a shower. Getting an office when he could run his new financial planning practice was key. But by co-working, Wallin believes he has a chance to show a bit of his personality, and widen his network, never a bad decision for a start-up.

“I wanted to start my own firm, but not shut myself off from the world,” he says. “And I’m not trying to wear a suit and tie everyday.”