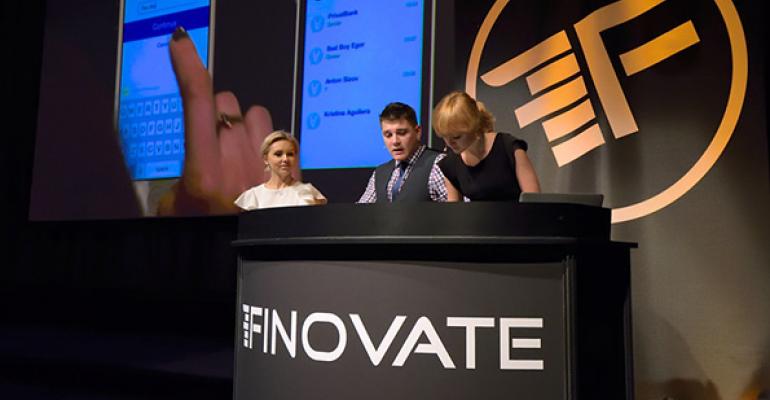 The Best Ideas from FinovateFall

FinovateFall is akin to speeding dating for financial services firms. Not all companies that attend the New York-based event are looking for a plug and play solution, or even a sure thing. Some just want to get a sense of the ideas that are floating around. But if the financial services sector is being disrupted and reinvented by technology, as many believe, it’s likely that some of the companies presenting at FinovateFall will be the ones to do it.

The two-day event felt like a blur as dozens of companies pitched their start-ups during  7-minute presentations on stage. There’s a hard stop for any who dare to push beyond the time limit—a bell rings and presenters are quite literally left in the dark, their microphones unplugged. It’s not Finovate if at least one team doesn’t go mute mid-word.

The audience is a made up of investors, financial companies, and competitors—and it’s not uncommon for new partnerships to be formed by day’s end. Here are a few firms that turned people’s heads in late September. Keep them on your radar; you’ll likely hear more from them in the near future.

Biometrics is still a popular area for innovation. This isn't surprising, as security is a concern that never seems to abate. Fingerprint scans are now widely available, particularly on the iPhone 5S and iPhone 6. But some note that fingerprints can be lifted and easily co-opted. At FinovateFall, the buzz centered instead around iris scans, using the ring-shaped portion of your eye to unlock apps, programs and even financial services information—anything a user allows the marker to unlock. Its promise lies in its ease of use.

“It’s not about security, but about convenience,” says Hector Hoyos, CEO and founder of New York-based Hoyos Labs, who spent years developing biometric solutions for the U.S. Military—including an iris reader that can identify someone 100 feet away. “If you don’t get users to use it, you’re nowhere.”

Hoyos’s latest solution is a still-unnamed consumer app that will read users’ facial biometrics, including an iris, identifying them and unlocking apps on their mobile device. Looking head-on into a smartphone, tablet or other device with a forward-facing camera, the solution quickly reads and approves a user’s identity. As an iris has about 200 unique markers, and a fingerprint typically has 60 to 70, the eye is considered a more accurate identifier.

Based on a Biometrics Open Protocol Standard (BOPS) from Hoyos Lab, the app is built on SOLR, a computer language written by Google and licensed to the Apache Foundation. Key to its strength, says Hoyos, is that the data is actually stored in encrypted form on the phone, not on a central server. Still, Hoyos is clear that there’s no solution that can completely safeguard against hacking.

“The iris is not infallible,” he says. “All biometrics are hackable. But [the iris] is the most effective when doing identification.”

iBillionaire: When You Want To Invest With the Big Boys

A cardboard cutout of Warren Buffet’s face, larger than life, dominated iBillionaire’s small booth at Finovate. Fresh from the launch of its iBillionaire Index last year, which tracks the equities bought by the top 21 billionaire investors, founder Raul Moreno and his partner launched an ETF that lets anyone buy the top 30 stocks in the S&P 500 most favored by billionaire investors.

Moreno and his co-founder built the ETF, which went live in August, from data mined from public documents, and rebalance the investments every quarter. Eight out of ten of the ETF’s buyers are retail investors; the rest are financial advisors, Moreno says. Moreno, a former analyst with GFG Capital, says he created the index after looking for a cheat sheet to make better choices for his own clients.

“I used to make a lot of mistakes,” he says. “And I wanted to have a source to see if my instincts were right.”

Minetta Brook: News You Can Actually Use

Millions of stories spew forth monthly across the Web. It’s simple to find news. What’s increasingly difficult is to find relevant news that’s not repeated everywhere, particularly if you’re an advisor who manages clients’ investments and wants to stay ahead of any detail that can influence a stock.

Enter Minetta Brook’s Knewsapp, a program that mines thousands of news sites, blogs and Twitter feeds to uncover activity on selected topics or key words. The difference between this and Google News alerts? Minetta Brook uses natural language processing, or NLP, written by co-founder and chief scientist Prabhu Venkatesh. The program can interpret text on a site, and even outsmarts keyword entries by recognizing the difference between a naturally written sentence containing useful information, and a sentence pumped up with random words solely to misdirect web surfers to useless sites. Sources are mined not for the number of clicks they receive, but for the usefulness of their news coverage.

Knewsapp had a soft launch in late September for 100 users with plans to open the app to more users in the coming months. Minetta Brooks is looking to offer a professional version  of the app and one for individual traders.

For example, as Ebola details began to spread in recent months, Knewsapp pulled up pieces on Tekmira—the pharmaceutical company working on an Ebola drug—long before its stock price began to soar earlier this year. Knewsapp’s “knowledge map,” as co-founder and CEO Deepak Bharadwaj puts it, has more than 260 million topics. More are being added daily.

“It’s very ‘computational intensive,’” says Bharadwaj. “But it does it in real time.”

When Justin Zhen worked at a hedge fund, he spent his time writing spreadsheets overloaded with data. It was difficult to move data from one location or program to another. Zhen wanted a better way.

Working with co-founder Gregory Ugwi, the two created Thinknum, a tool that lets analysts build their own equity valuation models without needing a programmer at their side. The tool also allows users to check on other analysts’ valuations—and even collaborate on joint models with other users.

The New York-based startup—hatched at the 500 Startups accelerator program in Silicon Valley—is still quite new. They just earned a $1 million seed round from a venture capital firm in July.

After a formal launch in December 2013, more than 4,000 users—predominantly analysts—are already on the platform, either working in the open or, for $200 a month, keeping their valuation models private. "Most won’t share,” admits Zhen. “But some will.”

When a client whose main source of wealth is a privately held business wants to retire, properly valuing the company is crucial. Firms that value small businesses are not hard to find online, but they are costly to contract with and the process is time-consuming. Michael M. Carter has an app that can dial that time down to mere minutes. Called BizEquity One, the site estimates a firm’s worth based on comparison to more than 27 million pre-valued businesses already entered in its database. If users add more detail—such as current debt, accounts payables, projected revenue and other financial data—BizEquity creates more detailed reports.

Small businesses make up about 99.7 percent of U.S. employer firms, according to the Small Business Administration. “But 75 percent of them don’t know what they’re worth,” says Carter. And when a client’s retirement is depending on that value, that’s a missing number advisors can’t afford to ignore.

Carter, BizEquity’s CEO, says that about 25 financial firms, including banks, have private-labeled the service, which starts at $365 a year for individual companies and just under $3,000 a year for advisory firms.