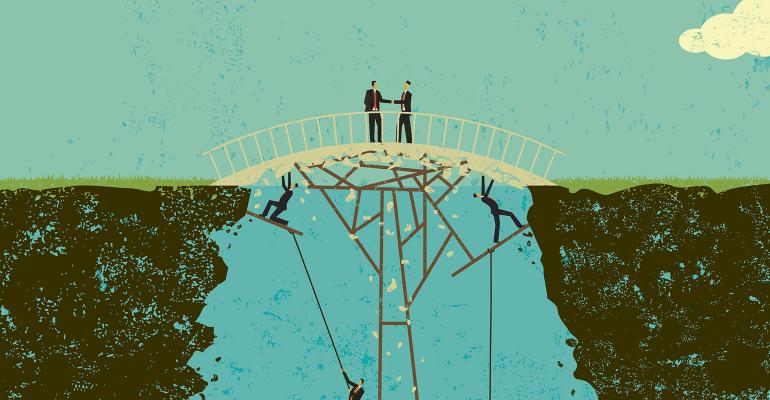 An efficient advisory firm with modern technology that has automated what processes it can is more appealing in a merger or acquisition.

Keys to a Successful M&A Deal
Tweets by Pershing

It’s no secret that merger and acquisition activity in financial services has proliferated in recent years, in no small part buoyed by interest from professional buyers, including private equity firms and consolidators. Much of this activity has taken place in the wealth management space, with advisors identifying a graying of the industry; a slew of regulatory changes; and, of course, competition from robos as the primary drivers of consolidation. In the wealth management industry alone, deals among registered investment advisors reached a record quarterly count of 48 in Q218, marking the sixth straight record year of M&A activity. Echelon reported that, in 2017, 168 deals were consummated, representing a 22 percent year-over-year increase over the 138 deals in 2016. And deals are only getting bigger: transactions involving sellers with more than $1 billion in assets under management also continued to surge.

However, many mergers or acquisitions miss the mark, with just 14 percent of senior executives asserting that deals met or exceeded their initial expectations for income or return on investment, according to Grant Thornton LLP’s 2018 Deal Value Curve Study. That’s precisely why diligent buyers and sellers should place an emphasis on client retention as they embark on deal-making endeavors. Tellingly, when polled by WealthManagement.com regarding potential M&A transactions, 71 percent of advisors reported that their biggest fears were clients failing to transition, or clients having a poor experience due to operational delays. When potential buyers in that same group were asked for their value proposition for firms to join forces in the first place, 72 percent said that their goal was to deliver a superior client experience.

These findings demonstrate that both buyers and sellers understand that the business value of a firm is predicated upon the goodwill of the client base; the responses reflect the importance of retaining clients through transparent client communications and continued trust. And one thing’s for certain: client loyalty is put to the test during an M&A transaction. Thus, an operational strategy that places the client experience front and center is vital for post-M&A success.

To foster the goal of delivering a superior client experience, anything that touches the client must be handled carefully. This is particularly true of operations and technology, especially the communications and reporting platforms that underpin the client experience—making it imperative to include tech and operations leaders on the transition teams. These executives can lend vital expertise, make prudent evaluations as to how existing systems can integrate with their own IT strategy and operations, as well as the breadth of data to be migrated. Together, the teams should create an integration roadmap for all technology and operations, outlining the priorities for the new corporate structure. This can, and should, include detailed timelines and contingency plans for the eventual integration.

For the buyer, technology due diligence should include a thorough review of the seller’s technology systems to identify potential integration opportunities or pitfalls. For example, buyers might want to review the acquiree’s client onboarding processes, evaluating whether the firm has an efficient paperless system, or are they still dependent on paper documents? One savvy advisory firm managing $2 billion in clients assets automated their systems and reduced their new account opening time to 30 minutes, down from a process that previously took several days and involved mailing paper forms.

At the same time, the seller could offer access to new technology as part of the incentive for the deal. Given today’s seller’s market, larger advisors who have successfully automated their operations would almost certainly be more attractive to buyers. Professional buyers and consolidators that either fund or offer automated solutions stand to differentiate themselves, in fact, per Deloitte’s M&A Trends Report 2018, acquisition of technology assets now ranks as the number one strategic driver of deal-making. A separate survey from Ernst & Young found that 38 percent of corporate acquirers and 22 percent of private equity professionals placed a significant emphasis on IT as part of their approach to transactions.

In an ideal world, companies on both sides of the deal would have fully automated processes, up-to-date technology systems, back-office infrastructure, workflows and service models designed to scale. Yet many advisory firms have not taken action to fully automate their systems. One-third of the respondents in the Wealthmanagement.com Survey have been in the business for 30 years or more, and many of them were trained on older processes and systems. Sellers who want to prepare themselves for the market would do well to consider technology upgrades. And advisors do want to upgrade. The WealthManagement.com Survey found that improvements such as workflow automation and document management top the list of technologies deemed to contribute to greater merger efficiency.

Strategic mergers that take seller operational readiness, as well as soft considerations, such as the potential for cultural integration, tend to work better than mergers focused only on growth. In the end, while the transition of very personal businesses that have been built over a lifetime can present challenges, a willingness to upgrade and merge strategic technologies can often serve as a bellwether for potential success.