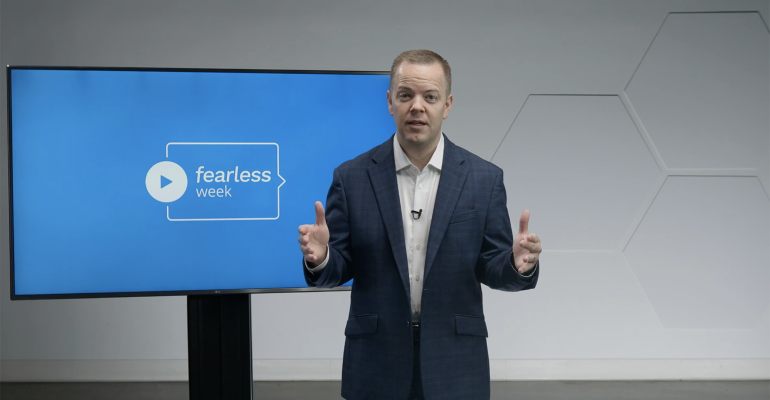 Riskalyze might have killed in-person conferences with its virtual 'Fearless Week.'

Last week Riskalyze wrapped up its annual advisor conference with over 3,000 registrations but under unique circumstances. Like many other conferences held in the U.S. since late February and early March, the fintech firm opted to go virtual. Under normal circumstances, Riskalyze has a track record of putting on a show for advisors attending its annual conferences, and last year it counted around 650 people in attendance. The coronavirus pandemic, however, looked to upset those plans.

Just as the pandemic has affected many other familiar events, from visiting grandparents to daily commutes, it’s brought change to conferences. Event planners have had to rewrite their playbooks and—like theatergoers visiting the movie theater for the first time—advisors, vendors and other attendees have had to learn how to attend virtual conferences and what to look for at the events.

Questions like, “Are the sessions pre-recorded or live? How does the chatroom work? What do I do with technical problems?” are all more salient in a virtual environment, compared with traditional in-person events.

Audience engagement is a challenge for both speakers and participants, as they come to terms with the “new normal.” Frank Coates, executive managing director and co-group president of Envestnet Analytics, had to include a laugh track, in the absence of a live audience, to land a joke in a presentation given earlier this year at Envestnet’s annual advisor conference.

Meanwhile, the “curse of the live demo” doesn’t loom as large in the world of prerecording, as proven during Microsoft’s virtual Build 2020 conference in May.

Riskalyze even had to call an audible in the midst of its Fearless Week, as CEO Aaron Klein realized the rules of biology still apply: Back-to-back virtual sessions didn’t give attendees a chance to even stand up and stretch—or take care of other business. Midconference, he changed the schedule of events to include gaps between sessions so participants could incorporate IRL “bio breaks,” that is “in real life” trips to the bathroom or to grab a snack.

Biggest thing we’re changing for #FearlessWeek Day 2 — there will be time for restroom breaks. We’re inserting a few minutes between some of the main stage sessions so you can stay synced in with live chat, but take care of life’s necessities!

The planners and organizers behind the Riskalyze conference are meticulous about quality. Justin Boatman, Riskalyze marketing executive and one of the leaders of the annual conference, used to run the audiovisuals at a California megachurch before turning to the religion of financial services in 2016. This year, he was responsible for putting together a virtual conference.

“We're competing with Broadway, national championship games, TED talks,” added Dan Bolton, managing director of customer marketing, in an interview last year. “That's who we want to mimic and look towards.” Today, two of those three competitors are out of contention and instead of the synchronized light displays and theater smoke strategically located throughout the firm’s in-person conference, Riskalyze leaned on prerecorded videos and witty storytelling.

In Aaron Klein’s prerecorded keynote, an advisor living in January 2020 was visited by his future self in August 2020. Jokes about airline miles and the difference between a work-from-home uniform and the suit-and-tie of the office resonated with participants, as evidenced by their chatroom comments, and injected a moment of levity in a bleak year that’s seen tens of thousands of deaths in the U.S. from the novel coronavirus.

In fact, the live chatroom provided a real-time window into the thoughts of participants in a way that’s rarely visible at a live conference. While surveys and social media boards attempt to capture the zeitgeist of a conference, a chatroom right next to a virtual presentation is both in real time and unvarnished. 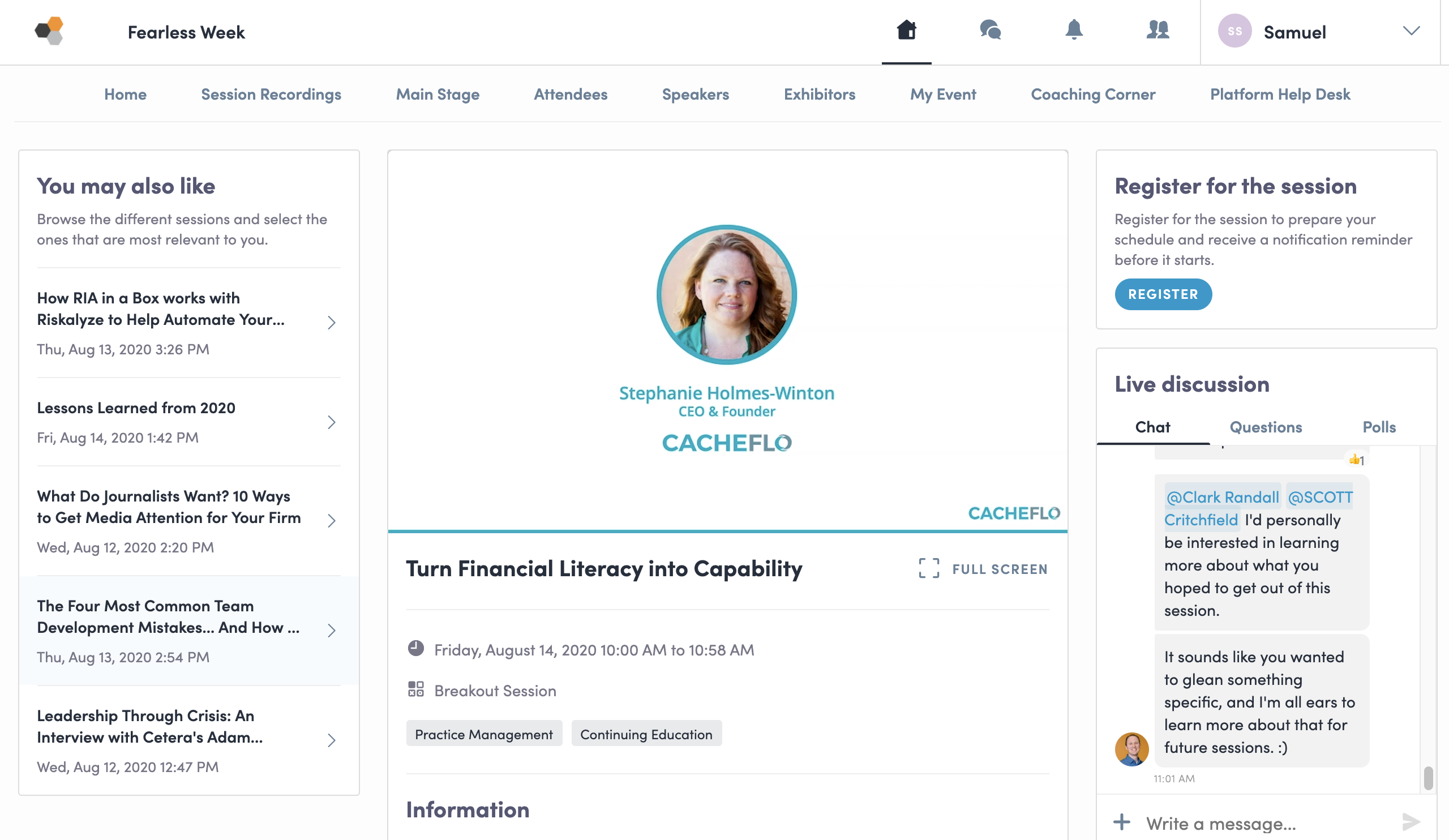 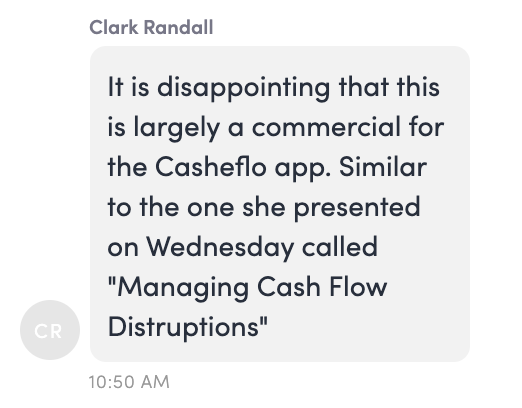 Some participants expressed frustration with certain sessions. “I’m not interested in a market recap. I was hoping for a presentation pertaining to behavioral finance,” wrote Curt Grossman, in the chatroom for a session entitled “Behavioral Finance and Biagnostics,” led by Omar Aguilar, chief investment officer of passive equity and multiasset strategies at Charles Schwab. ("Biagnostics" is "an educational program designed to help financial professionals incorporate behavioral finance into their practice," according to materials on Schwab's site.)

One user, James Deligianis, said the music was “annoying” in the opening session of the conference. Other attendees found it confusing that certain sessions were prerecorded, while others, like the week’s media panel, were presented live.

Meanwhile, certain attendees found their productivity bolstered by the virtual format. “I can stay engaged with the conversation and I navigate between emails, etc.,” noted conference attendee and FA Match CEO Ryan Shanks. Information tended to flow faster in certain scenarios. Riskalyze CEO Klein took questions from attendees via the chatroom during his keynote, which was prerecorded. 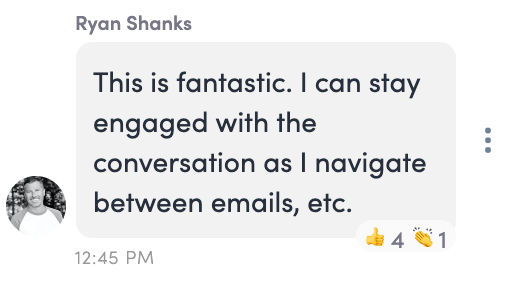 By Friday, images were circulating on social media of advisor teams watching the conference from their offices or homes.

COVID has thrown a wrench into just about everything this year. This week, we have been making the most of attending a virtual conference, hosted by @Riskalyze pic.twitter.com/QCzzaqKuM2

Geography was also no longer an issue. Attendees “traveled” virtually to Mexico City for a coffee masterclass with Ricardo Lopez or “attended” a morning yoga routine led by Nicole Thurlow, a certified yoga instructor and product manager at Riskalyze. 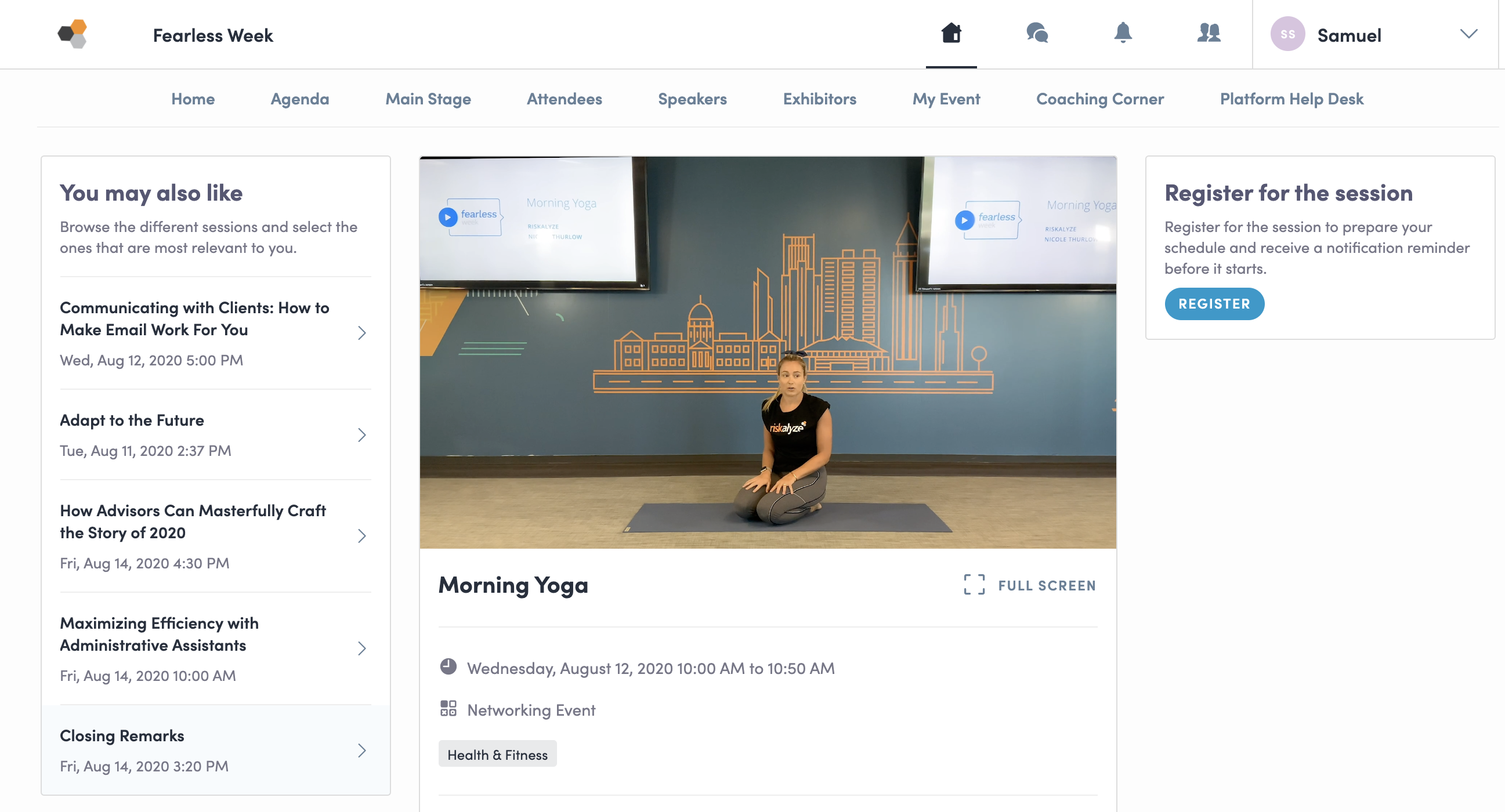 One attendee, a first-time Riskalyze conference attendee and first-time virtual conference attendee, is rethinking in-person conferences—even after the pandemic is under control. “I like the experience,” said Christopher Tasik, founder of Tasik Financial Strategies in Brentwood, Tenn. “You're able to get to the speakers immediately. I pinged [Redtail Technology CEO] Brian McLaughlin on an issue that I was concerned about. And … boom, he's right there. Within two seconds he addressed my question straight back with a good answer.”

Tasik treated the prerecorded sessions like a recorded sporting event, skipping through the parts he already knew to focus on the new information he wanted to hear. Because the conference content (totaling seven terabytes of data, according to Klein) stays online after the event, Tasik was able to revisit missed sessions over the weekend and at his own pace. Riskalyze even sent a swag package, he said, which included a door hanger for his home office so his kids would know when he was working.

Test run was a success, no disruptions!
Massive S/O to @AaronKlein & @Riskalyze Thank you both for the clever care package!

PS: @RedtailCRM the dart was a hit with my 6 year old. I was able to have 2 turns before he took off with it. pic.twitter.com/8DEadjo9uI

But a virtual conference is not without its challenges. While he was able to make some new business connections, he said networking is easier in person than online. At times the agenda and schedule confused him, but once he realized he could rewatch content it made it easier for him to navigate between the conference and his day-to-day business needs.

Overall, the experience was so impressive that Tasik would give serious consideration to even attending in-person conferences in the future, he said. “50-50, honestly,” he said of his odds of attending an in-person conference, if health and safety was no longer a concern. “I'd have to think it through. I'd have to look at the agenda. If it was a compelling agenda. It was a good time of year to get away,” he added.

“I wasn't sure what to expect going into it,” he said. “The online flavor is also great.”