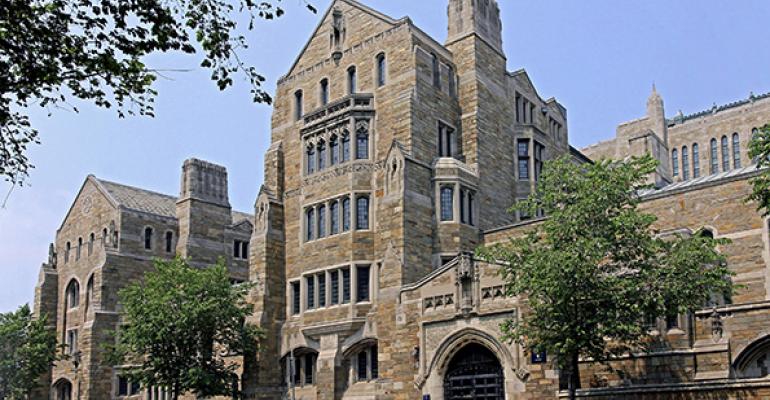 (Bloomberg) -- Yale University’s endowment earned $2.6 billion in investment gains in fiscal 2015. A proposed bill in the Ivy League school’s home state of Connecticut is eyeing a share of the bounty as a source of revenue.

Schools with funds of $10 billion or more -- affecting Yale only -- could face a tax on endowment income, according to legislation introduced this month. Yale’s record $25.6 billion fund is the second largest in U.S. higher education, behind Harvard University’s $37.6 billion.

The richest college endowments, many at their highest values ever, also have drawn scrutiny from federal lawmakers. Last month, the U.S. Senate Finance and House Ways and Means committees sent a joint inquiry to the richest 56 private schools about endowments, seeking to understand the impact of their tax-exempt status on the price tag of higher education, among other issues.

Connecticut is facing a $266 million shortfall for fiscal 2016, according to the state Office of Fiscal Analysis, and taxing the endowment’s earnings could help close the gap.

Supporters of the bill want Yale to spend more money to expand access to higher education and “create innovative, high-paying jobs,” Martin Looney, a Democrat who presides over the Senate and whose district includes Yale’s campus in New Haven, said in written testimony submitted for a committee hearing on March 22.

“It is our hope that these rich schools can use their wealth to create job opportunities, rather than simply to get richer,” Looney said, adding that Yale “possesses the resources to have an even greater impact on our economy.”

Yale and the Greater New Haven Chamber of Commerce urged legislators to reject the bill. Yale currently makes a voluntary payment to New Haven of more than $8.2 million annually, according to the school.

Richard Jacob, the school’s associate vice president for federal and state relations, said in written testimony that the bill and a second one that would tax college property are a “specific attack on higher education.”

“The proposed taxes on Yale would diminish the university’s ability to carry out its charitable mission and to enable and support growth in New Haven,” Jacob wrote. “Yale’s generous financial aid policies, which enable Yale College students to avoid any loans, and which waive any parent contribution for low-income students, exist because of the endowment.”

Yale’s endowment allocated $1.1 billion to the operating budget for the year ended June 30, according to the school’s annual report. The fund earned a return of 11.5 percent in the period, among the top performers of endowments. It returned an annualized 10 percent over the last decade.

The school’s annual budget is $3.2 billion, including $2 billion in wages and benefits, and almost a third of Yale’s 13,000 employees live in New Haven, according to the school.