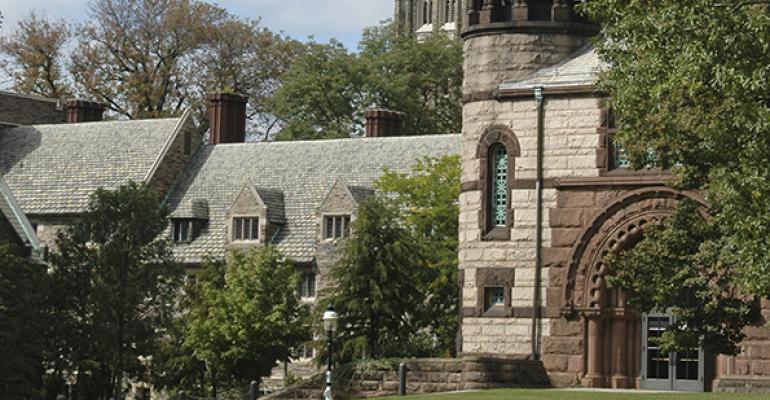 Princeton's Neighbors Say to Heck With Freebies -- We Want Cash

(Bloomberg) -- Free lectures, admission to athletic games and concerts, even shuttles to Trader Joe’s are some of the perks that neighbors of Princeton University get from New Jersey’s only Ivy League school.

A growing number of residents, though, resent the gestures. Riding a national wave of discontent with nonprofit institutions, they’re suing to challenge the tax-exempt status of Princeton, whose $22.7 billion endowment makes it the fourth-richest U.S. university. The outcome could cut homeowners’ annual property taxes, averaging $17,699, by a third. It also could end the freebies that make Princeton a cushy oasis while other New Jersey towns, burdened by high public-worker costs and flat state aid, struggle to maintain basic services.

“They almost operate like a hedge fund that conducts classes,” Leighton Newlin, a 64-year-old plaintiff, said of the university in the town where he was born. A director of a prisoner re-entry program, Newlin has seen his tax bill more than double to $10,000 since a 2010 revaluation. “They have some of the best real estate in all of Princeton. The fact is, those buildings do not pay their fair share of taxes.”

In recent weeks, about two dozen Princeton homeowners joined a five-year-old lawsuit challenging the university’s property-tax exemption for several years. In papers filed in New Jersey tax court, they argue that the school from 2005 to 2012 gained $524 million in licensing income, mostly from a patent that led to the creation of Alimta, a cancer drug manufactured by Eli Lilly. It also uses some buildings for commercial purposes.

Similar gripes threaten to upend such communities as New Haven, Connecticut, where Princeton’s Ivy League cousin Yale University is the subject of proposed legislation to tax its property. The school, with a $25.6 billion endowment, second only to Harvard’s $37.6 billion, says the bill is unconstitutional, and would lead to $760,000 in taxes on its Woolsey Hall music auditorium alone.

To its hometown, where 26 percent live in poverty, Yale has made $96 million in voluntary contributions since 1990, in addition to tax payments on non-academic properties, according to its website. Like Princeton, Yale offers a slew of services and programs to town residents: It’s helped about 25 percent of employees who live in New Haven to buy their homes, provides more than $12 million in annual health care and contributes to neighborhood revitalization.

As college costs soar, though, U.S. congressional committees are examining investments and tax exemptions, asking 56 schools with assets of more than $1 billion each how their endowments are managed and spent. Such questions are popping up locally, too. In March, New Jersey Governor Chris Christie, a Republican, proposed a two-year freeze on tax collections affecting potentially 62 non-profit hospitals, after a tax court ruling against Morristown Medical Center.

Efforts to tax or impose fees on exempt institutions cause only harm, according to the National Council of Nonprofits, a Washington-based lobbying group. In its 2015 policy agenda, it criticized the mayors of Boston, Chicago and New Orleans for such proposals, saying they put at risk “money contributed to deliver programs and services for individuals and local communities.”

In Princeton, some say it’s a chance worth taking.

“I don’t mind biting the hand that feeds me,” said Janet Martin, 77, a retired university Classics professor and homeowner in the historically black Witherspoon-Jackson neighborhood, where gentrification has pushed asking prices to more than $400,000 for modest homes. “The university could definitely pay a larger share.”

Princeton, which is halfway between Philadelphia and Manhattan, was actually two municipalities with the same name until they merged in 2013 to help combat New Jersey’s highest-in-the-nation property taxes. Last year, the town’s average annual bill was more than double the state’s $8,353. Meanwhile, homeowners complain that the private university shoulders too light a local burden.

The university pays its hometown about $8 million in annual levies toward a proposed $61.9 million municipal budget. It kicks in another $3 million voluntarily, a boost for emergency services and public works. The rest, the freebies, make for what the school calls positive town-and-gown relations.

The school’s annual tax bill should be as much as $40 million a year, about 264 percent more than it pays now, according to Princeton attorney Bruce Afran, who represents the plaintiffs. That’s enough to cut homeowners’ tax burden by about one-third, he said.

“The so-called benefits the university gives are not real economic benefits that help the average person,” Afran said in an interview.

In a e-mailed statement, Bob Durkee, the university’s secretary and vice president, said the school is the borough’s largest taxpayer, helping the town maintain the county’s lowest tax rate.

“They’re not being a benefactor -- they’re being like the billionaire class,” he said. “They want to impress you with a gift, and you say, ‘Ooh, boy, that sounds big!’ In reality, why is Princeton being so parsimonious?”