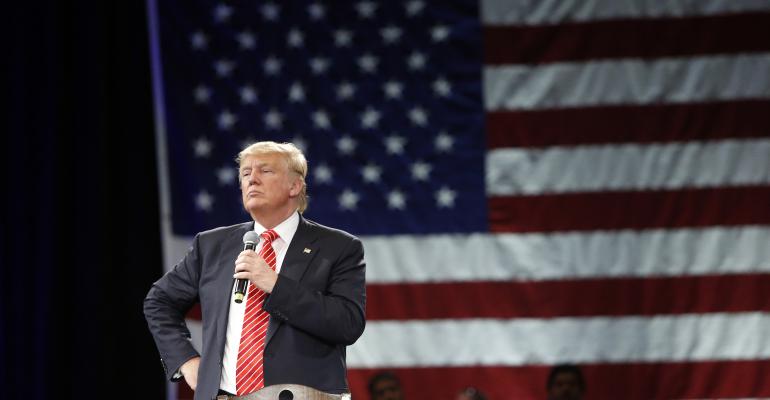 I Saw Trump's Tax Returns. You Should, Too.

(Bloomberg View) -- In January, Donald Trump had this to say when he was asked about whether he would release his tax returns: “I have very big returns, as you know, and I have everything all approved and very beautiful and we’ll be working that over in the next period of time.”

Yet he held off on releasing his returns. And on Tuesday night, the presumptive Republican presidential nominee seemed to close the door for good on the matter. He told the Associated Press that he wouldn’t release his returns prior to the November elections unless what he described as Internal Revenue Service audit of his finances was complete.

“There’s nothing to learn from them,” Trump said of his tax returns.

“It is disqualifying for a modern-day presidential nominee to refuse to release tax returns to the voters, especially one who has not been subject to public scrutiny in either military or public service,” wrote the former GOP presidential nominee in a Facebook post. “While not a likely circumstance, the potential for hidden inappropriate associations with foreign entities, criminal organizations, or other unsavory groups is simply too great a risk to ignore for someone who is seeking to become commander-in-chief.”

For anyone who had whiplash after all of this, Trump offered some comfort by reaffirming that whenever he might release his returns, there wouldn’t be anything of value to be discovered there anyway.

“You learn very little from a tax return,” he told Fox News.

Actually, as someone who saw Trump’s federal tax returns about a decade ago as part of a legal action in which he sued me for libel (the suit was later dismissed), I think there probably are some things to be learned from them.

The tax returns my lawyers and I reviewed were sealed, and a court order prevents me from speaking or writing about the specifics of what I saw. I can say that Trump routinely delayed -- for months on end -- producing those documents, and when they finally arrived they were so heavily redacted that they looked like crossword puzzles. The litigation ran on for five years, and during that time we had to petition the court to compel Trump to hand over unredacted versions of the tax returns -- which he ultimately did.

So despite Trump’s statements to the contrary, here are some general questions that a full release of at least several years of his tax returns might usefully answer:

1) Income: Trump has made the size of his fortune a centerpiece of his presidential campaign, implying that it’s a measure of his success as a businessman. He has also correctly noted that the income shown on his tax returns isn’t a reflection of his total wealth. Even so, income is a basis for assessing some of the foundations of any individual’s wealth -- and would certainly reflect the financial wherewithal of the businesses in which Trump is involved.

After Fortune’s Shawn Tully dug into Trump’s financial disclosures with the Federal Election Commission and an accompanying personal balance sheet his campaign released, he noted in March that Trump “appears to have overstated his income, by a lot, which could be the reason he has so far tried to avoid releasing his returns.” Tully said that Trump apparently boosted his income in the documents by conflating his various businesses’ revenue with his personal income. Trump didn’t respond to Tully’s assessment, but he could clear up all of that by releasing his tax returns.

2) Business Activities: Trump has long claimed that his company, the Trump Organization, employs thousands of people. He has also criticized Fortune 500 companies for operating businesses overseas at the expense of jobs for U.S. workers. Trump’s returns would show how active he and his businesses are globally -- and would help substantiate the actual size and scope of his operation.

3) Charitable Giving: Trump has said that he’s a generous benefactor to a variety of causes -- especially war veterans -- even though it’s been hard to find concrete evidence to support the assertion. Other examples of major philanthropic largess from Trump have also been elusive. Trump could release his tax returns and put the matter to rest.

4) Tax Planning: There’s been global attention focused on the issue of how politicians and the wealthy use tax havens and shell companies to possibly hide parts of their fortunes from authorities. If released, Trump’s returns would make clear whether or not he used such vehicles.

5) Transparency and Accountability: Trump is seeking the most powerful office in the world. Some of the potential conflicts of interest or financial pressures that may arise if he reaches the White House would get an early airing in a release of his tax returns.

For the last 40 years, presidential candidates have released their returns. Trump, of course, has portrayed himself as the un-candidate, the guy who bucks convention. But disclosing tax returns is a valuable political tradition that’s well worth preserving.