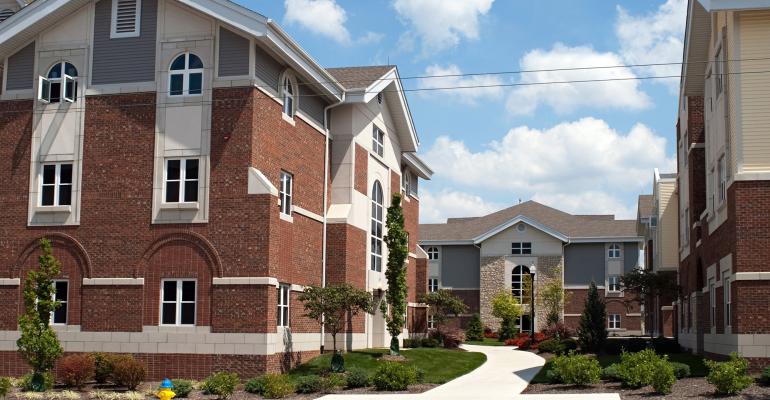 How Will Student Housing Operators Fare This Fall? The Answer Depends on Which Universities They Serve

Owners in markets where universities are reopening in person are seeing a surge in demand as students are pushed into off-campus housing.

Uncertainty looms over off-campus student housing operators in markets where universities have elected to go entirely virtual, says Sean Baird, director of the national student housing group with real estate services firm Colliers International. They do not know whether students will honor the leases they signed or what their final occupancy will look like for the upcoming academic year. They are looking at the upcoming school year through unfavorable lenses and expecting high vacancies.

For student housing owners in markets where universities are reopening in person, there is a great amount of optimism, says Baird. A number of these universities are re-evaluating their on-campus housing strategies by eliminating double, triple, and quadruple occupancy bedrooms, while also taking entire on-campus dorms off-line in order to use as housing for COVID-19 positive students to quarantine. That has created a surge in demand as more students are pushed into the off-campus housing market.

Nationally, the student housing pre-leasing level for the fall 2020 semester stood at 74.9 percent as of June 2020, according to Carl Whitaker, market analyst with RealPage Inc., a provider of property management software and services. That was about 500 basis points below the June 2019 reading. According to data provider Yardi Matrix, student housing pre-leasing level through June 2020 was 2.9 percent below last year’s levels, according to Doug Ressler, manager of business intelligence with the company.

“We are well poised for the year as we are 90 percent pre-leased... We hope to further benefit from a supply reduction of over 55,000 on-campus beds in the markets we serve as a result of university plans to de-densify and hold quarantine beds offline,” says William Talbot, chief investment officer of American Campus Communities, a REIT that invests in dormitory housing. “Our leasing trends and consumer sentiment at this time make us cautiously optimistic that we are on a path that many would have considered a best-case scenario at the outset of this pandemic.”

Colliers data should that the lowest reported pre-leasing level for any student housing operator it tracks for fall 2020 was at 90 percent, while the highest was at 97.6 percent, according to Dorothy Jackman, executive managing director of the national student housing group with the firm. That represents roughly 360,000 beds nationwide.

“It’s worth noting that June 2020 saw a month-over-month increase of about 6 percent. That was about the same pace of increase in June 2019, which might indicate that pre-leasing is now back on track after the April and May hiccup,” says Whitaker. “As most schools have now announced either return to campus or some hybrid offering, both students and operators regained a little confidence, in turn boosting pre-lease figures.”

For example, the University of West Virginia, among other universities across the country, will implement a phased return in the fall on its Morgantown campus. That means the university will delay resident hall move-ins by a week and start of school by another two weeks, in order to spread out students’ arrivals, says Benjamin Modleski, president of Core Spaces, a student housing developer.

At the moment, only about 4 percent of universities nationwide plan on going fully online, while the other 96 percent will operate under some sort of mixed hybrid model of in-person and online instruction, according to Core Spaces research.

Meanwhile, the pandemic has shifted the student housing industry in terms of design and operational use of amenities, according to Talbot. Students now prefer modern apartment and suite-style accommodations that more easily allow for better control over sanitization and physical distancing, he notes. Furniture, fixtures and equipment solutions will more than likely be updated to meet those needs.

“One of the biggest trends and future question marks that remains is whether universities plan to discontinue double, triple, and quad occupancy bedrooms into the future. If so, there will be a large uptick in rates in many markets where the off-campus housing was already in tight supply,” says Baird. “The resulting effects could be a surge in both on- and off-campus student housing development over the next few years and a replacement of aging, outdated housing.”