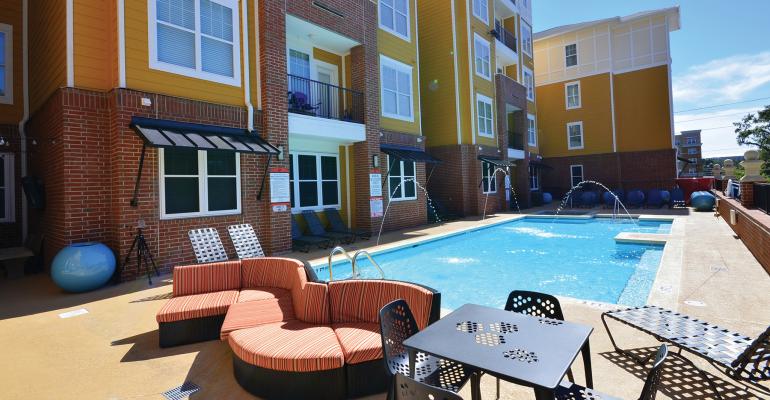 Some companies that provide student housing say they have seen a shift away from over-the-top amenities that were popular with off-campus renters a few years back.

Lazy rivers, tanning beds, rock-climbing walls—resort-style amenities in student housing may be falling out of fashion as the sector faces demographic changes and lingering supply-demand imbalances.

Some companies that provide student housing say they have seen a shift away from over-the-top amenities that were popular with off-campus renters a few years back. Instead, there has been an increasing shift toward amenities that reflect a focus on studying, health and fitness and the ride-sharing economy.

“We are seeing a push towards more useful amenities,” says Adam Byrley, COO of The Preiss Company, an off-campus student housing provider headquartered in Raleigh, N.C.

Several years ago, when student-housing construction was at its peak, there was a push among developers to outcompete each other and provide the most creative and over-the-top amenities, says Taylor Gunn, student housing director at Axiometrics, a RealPage company.

Today, construction in the sector is slowing--in 2013 and 2014, there were roughly 62,500 student housing beds delivered to the market, compared to 46,500 beds planned for this year—and there is a demographic shift in what students want as well, Gunn says. “Over the last year, [there was] maybe a little bit more people just trying to understand more of what people are actually using,” she says.

In spite of slowing construction, the sector may still be facing some supply concerns: Randy Churchey, the CEO of student housing REIT EdR, said during a recent earnings call that supply this year is expected to outpace enrollment growth by 60 basis points, consistent with the rate seen over the past seven years. Jim Hopke, president of American Campus Communities, another student housing REIT, said during the firm’s first-quarter earnings call that it too is continuing to watch supply issues in a handful of markets, including Austin and College Station, Texas and Tallahassee, Fla.

The abundance of new supply and heightened competition among properties is triggering slowdown in leasing. As of April, leasing velocity averaged 67.3 percent, which is down 147 basis points from the year before, Gunn says.

The newest generation to enter college—Generation Z, or those born in the mid-1990s—tends to be more environmentally friendly and more health-conscious, shifting the focus to amenities like recycling services and innovative fitness rooms, according to Gunn.

Campus Advantage has seen this evolution first-hand and, thanks to the help of student surveys and monitoring the usage of its properties’ amenities, has repurposed many little-used movie rooms into high-end fitness centers, says Jennifer Cassidy, senior vice president of asset management at the student housing provider.

“Study and fitness, in my opinion, are of higher demand right now than we’ve seen them previously,” Cassidy says.

In some cases, resort-style amenities may have also pushed rents up too high for many students, who increasingly bear higher education costs and taking out bigger loans. At Texas A&M University in College Station, for example, the Park West student housing complex boasts a rooftop pool, three gyms and game-room lounges. But the 3,400-bed facility also came with a $1,000-a-month price tag, which many students and their parents turned out to be unwilling to pay, Bloomberg reports. Park West developer Servitas ended up slashing rents on many units to under $600 a month in order to get the property 90 percent pre-leased for the fall semester.

Gunn says it is not always clear how luxury amenities impact rents. In some cases, she notes, such amenities do hike up rents, but there have also been changes to construction and land costs; in recent years, new product has been built closer to campus, triggering a rent premium.

Rodney King, vice president of real estate development at EdR, wrote in an email that how amenities impact rents can be market-dependent. “At some universities there’s a willingness to pay higher-than-market-rate rents because the amenity package blows everyone else in the market away,” he wrote. “At others, the market is more value-driven, so a premiere amenity package isn’t as strong of a lure for prospective students.”

While these changes may be due to the rise in Generation Z college students, they could also be cyclical: “The demographics have changed and it’s all part of a cycle,” King wrote. “A few years down the road some new technology or luxury will hit the market and students will demand it.”