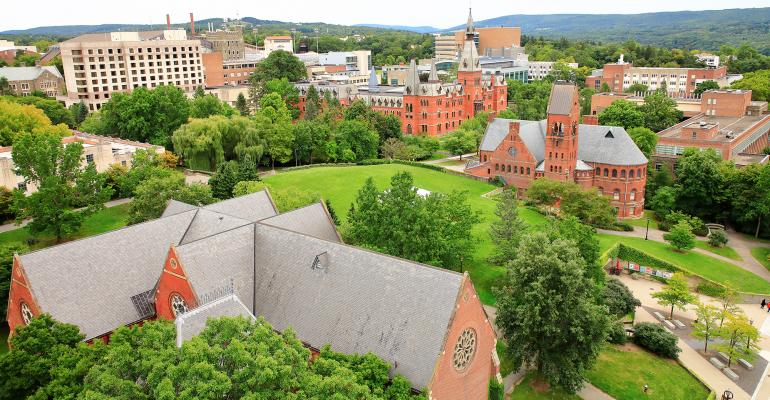 (Bloomberg)—When Cornell University reopened its sprawling Ithaca, New York campus to a population of about 24,000 people in late August, more than a few students, parents, faculty and local residents saw a disaster in the making.

After all, no other Ivy League school was attempting to bring back its entire student body all at once.

Rachel Geltman, a senior whose father died from the virus this spring, and her mother, Elizabeth Geltman, a public-health professor and Cornell alumna herself, were among those with serious doubts. Rachel worried that the university was setting its students up to fail, while her mother recalled the university’s long tradition of rowdy Greek houses and cramped on-campus dormitories that she calls “stationary cruise ships.”

And, sure enough, a cluster of cases emerged just days before classes were to begin. People living in Ithaca and surrounding towns were just “waiting for the other shoe to drop,” county legislator Anna Kelles said.

Eight weeks into the fall semester they are still waiting. After quelling the early outbreak, new cases have remained so low that Cornell’s test-positivity rate of 0.006% one recent week was one of the lowest of any college or university in the country performing large-scale testing, Provost Michael Kotlikoff said. With only 149 virus cases total through late October, reality outperformed even the school’s most optimistic modeling. This comes even as Covid-19 has roared back in communities across the country, including many with college campuses.

As the university hatches plans for another in-person semester this spring, and with even more students expected to return, administrators say their experience shows that by now well-understood public-health measures work, even amid a failure of U.S. policy to implement them broadly. With a month left to Thanksgiving break, when students will go home until in-person classes resume in February, there’s also a realization that perils remain: Cold weather is approaching, and cases in surrounding communities are on the rise.

“We are in good shape right now, but there are threats. This is a fragile victory,” said Kotlikoff. “People are getting tired and they’re tired of being in their rooms. And it’s something everyone’s putting up with.”

When Cornell first announced in late June its decision to bring students back, it said thousands would return to private housing whether school facilities were open or not. In Ithaca, real estate is tight in a coveted, dense stretch of off-campus apartments known as Collegetown, and students often sign expensive leases as much as a year in advance.

Without the campus as a resource, Cornell would have had less oversight over students and less ability to test them, resulting in about six times more cases, its modeling concluded.

Since classes began in early September, regular testing as often as twice a week has proven instrumental. The tests are performed in a new lab set up in Cornell’s renowned veterinary college, under the purview of Kotlikoff, a former vet school dean. He’s well-acquainted with PCR testing, the gold-standard for detecting Covid-19 and which he used for decades to root out viral outbreaks in mouse colonies maintained for scientific research.

As it tests about 35,000 students, faculty and staff a week, the Cornell lab -- like those at other educational institutions -- has relied on an emerging technology known as pooling to process five samples at once, with hopes of eventually getting to 24 at a time. That lowered the cost to $12 a test, and let the lab save chemicals called reagents that are in short supply nationwide. Testing and several other virus measures are expected to cost Cornell about $10 million for the semester.

Bringing students back in person has also been a major financial draw for colleges and universities, which have had to refund millions in room and board charges after students were sent home during the spring term. A drop in enrollments this fall has further squeezed their budgets. Cornell instituted a hiring freeze and spending and salary cuts, including for Kotlikoff.

“The alternative was for us to have an online semester, a less than valuable experience for our students, a campus that wasn’t occupied in terms of our dorms and dining services,” he said. “It would require layoffs of individuals that we didn’t want to do.”

The school also credits a new approach it calls “adaptive” testing, which casts a wider net for potential infections than traditional contact tracing. Instead of looking for individuals who were within six feet of a confirmed Covid-19 case for 10 minutes or more, as New York state contact tracing does, adaptive testing also screens people who don’t meet that definition but share a bathroom with a positive case or are on the same athletic team.

Cornell administrators concede they went into the fall semester with certain advantages not shared by all other institutions. These include a remote location in Ithaca and robust financial and scientific resources. In addition to the vet school for testing, it has an on-campus hotel, the Statler, used for isolation and quarantine, said Peter Frazier, an associate professor who led the modeling for Cornell’s reopening. Those and other factors may limit how broadly Cornell’s safeguards may work in other settings.

One major, if unsurprising, takeaway from Cornell’s limited infections: The biggest risk is in social networks and get-togethers. Cases have also been imported when students have traveled outside of campus. But the university has seen no transmission in the classroom, though infected students have attended classes, or in dorms, which are about 70% occupied, according to Kotlikoff.

That early cluster, it turned out, emerged from college athletes getting together without masks and failing to socially distance, prompting a public rebuke from the school. That was “a real warning shot” and the school hasn’t seen virus spread like it since, Kotlikoff said.

Geltman, the public-health professor and Cornell mom, has been impressed by the virus measures Cornell has taken. But she said that more work is needed to understand why the university has been so successful, including antibody tests to understand how much protection to the virus exists in its population.

“Are they lucky? Yes, to some extent they are,” she said. “Because it takes a small group of idiots to create a big problem.”

To contact the author of this story: Emma Court in New York at [email protected]