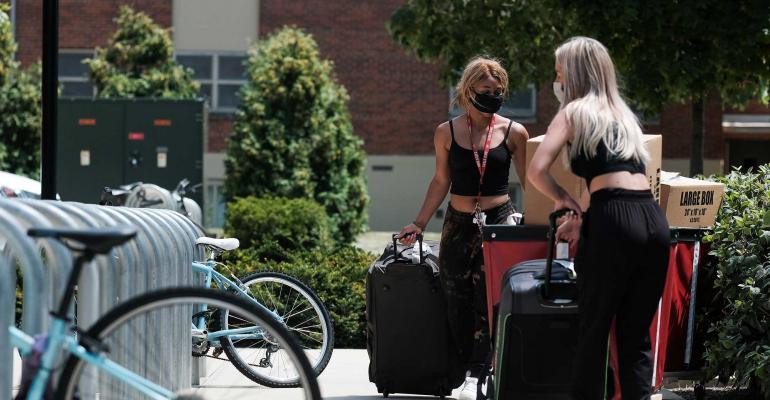 Campus Outbreaks Have Muddied the Picture for Student Housing

Operators are experiencing big variances in occupancy rates for the fall semester.

Off-campus student housing operators have endured a rocky month as many universities around the country that brought students back for the fall semester suffered immediate COVID-19 outbreaks. That caused some schools to send students back home. It also led to other schools watching the carnage at the early openers to change their own plans for in-person classes.

One example of that was Michigan State University, which at the last minute scrapped plans to bring students back and instead has opted for online instruction.

“Effective immediately, we are asking undergraduate students who planned to live in our residence halls this fall to stay home and continue their education with Michigan State University remotely,” said Michigan State president Samuel Stanley in an August 18 letter to students.

So once again, the novel coronavirus is tearing up plans for the fall 2020 semester. Michigan State joins colleges like the schools in the University of California system, which had already announced that they would not hold class in person.

According to the latest tracking by the Chronicle of Higher Education and Davidson College’s College Crisis Initiative, just 2.3 percent of the 3,000 higher education institutions being tracked are fully in person for the fall semester. Another 19 percent are primarily in person, 16 percent are taking a hybrid approach, 27 percent are conducting classes primarily online and 6 percent are fully online. In addition, 24 percent of the institutions were still finalizing their plans. Those numbers have moved a lot from just a month ago.

The shifting picture has had impacts on off-campus operators. Many properties have already achieved some security. These properties are fully-occupied for the fall 2020 semester with new students who have signed 12-month leases.

But about one-in-ten have had serious problems attracting students. These include some properties that serve smaller schools or schools that announced early this summer that they would have no classes in person.

In August 2020, just before the start of the academic year, student housing beds in the U.S. were 88 percent occupied, according to data firm RealPage, Inc. That’s not far from the percentage of student housing beds that were occupied for the fall 2019 semester—91 percent.

In March 2020, properties had been fully-occupied before the COVID-19 pandemic did well, even dormitories at campuses closed around them. Roughly two-thirds of the residents continued to live at student housing even after many college dormitories closed to slow the spread of the virus.  “Students still want to be in their college town, sharing the college experience with their peers,” says Jackman. Also, in most cases even students who moved out continued to honor their leases and pay rent.

However, very few student housing properties are individually 88 percent occupied, according to RealPage. Most are doing much better—or much worse. “There’s a big range of performance,” says Carl Whitaker, market analytics manager for RealPage, Inc.

At about a quarter (25 percent) of the core 175 schools tracked by RealPage, more than 95 percent of the student housing beds are occupied. At many of these schools, owners of student housing properties may even be benefiting from students who have been forced to move out of dormitories.

“At our properties [at MSU] we captured 170 leases the first weekend after the university gave notice to those students to vacate,” says Fred Pierce, president of Pierce Education Properties, headquartered in San Diego.

Other university are reducing density by allowing fewer students into their on-campus dormitories—and in the process creating additional interest for off-campus student housing properties. “Off-campus accommodations have risen in demand as universities work to remove beds from its dormitories,” says James Jago, principal at Pebb Capital Student Living.

“Some off-campus operators may see a bump in occupancy rates as they capture that new demand,” says Whitaker.

Another set of student housing properties has clearly been damaged by the COVID-19 pandemic. At about 10 percent of those core 175 schools, representing almost a quarter of the properties tracked by RealPage, less than 70 percent of the beds were occupied in August. Those schools include several giant campuses, such as the University of California schools, with many privately-owned student housing properties.

“They didn’t want to be the only one online, and lose enrollment to schools that were not online only,” says Will Baker, senior managing director at Walker Dunlop, a financial firm with a specialty in financing student housing properties, with an office in Birmingham, Ala.

Some of these schools where student housing properties are struggling may also be smaller schools that might not be prepared to succeed with online instruction. “They might see some enrollment decline,” says Baker.