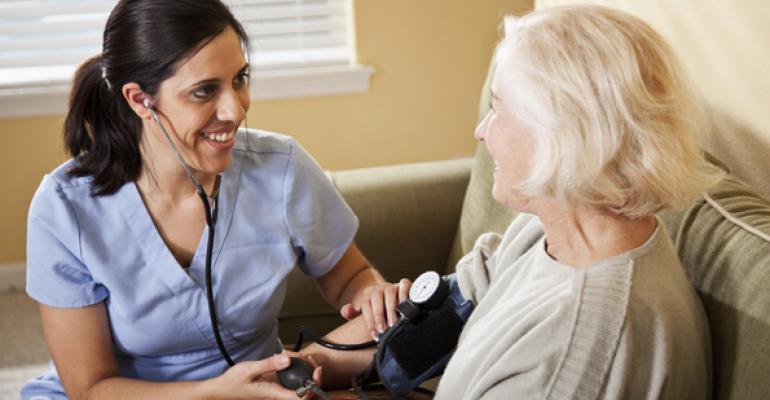 The national occupancy rate dropped to 81.7 percent during the months of April to June, a 79 basis point drop from the quarter before, according to a quarterly report from the NIC.

The occupancy rate for skilled nursing operators in the U.S. hit a new low in the second quarter, an ongoing pattern stemming from pressures related to policy changes and shorter lengths of patient stays, according to a new report.

The national occupancy rate dropped to 81.7 percent during the months of April to June, a 79 basis point drop from the quarter before, according to a quarterly report from the National Investment Center for Seniors Housing and Care (NIC). This represents a 137 basis point drop year-over-year. (A shift in the number of properties participating in the NIC’s monthly survey led to a revision of the group’s first-quarter occupancy calculation.) Rural markets posted the sharpest decline of 89 basis points quarter-over-quarter, according to the report.

The slide in occupancy was not unexpected, as the sector has faced pressure over the last few years from policy changes related to reimbursements and a shift to a value-based healthcare system, says Bill Kauffman, senior principal at the NIC. Patients in need of more skilled nursing care are staying for lower lengths of time because of these policy changes.

However, there has been a drop in the number of operational beds throughout the country, even as supply remains a top concern in seniors housing in general. In the second quarter, the NIC tracked 486,787 freestanding campuses in primary U.S. markets, compared to 488,981 during the same period in 2017. Operators are converting semi-private rooms to private rooms and states impose moratoriums on construction or require certificates of need, making it difficult to add to supply, Kauffman says.

But this shrinking supply is not offsetting the sector’s other headwinds. “The demand decline has been faster over the last few years,” Kauffman says.

And increasingly, many patients go to outpatient or rehab facilities—or even straight home—after procedures. “It’s really the changing dynamics have basically caused the patients to potentially bypass properties,” Kauffman says.

Other longer-term care facilities like assisted living homes also have become more capable of taking care of residents that otherwise might have gone into nursing properties, says Chris Blanda, a senior vice president at Lancaster Pollard, a financial services firm that provides capital funding to the healthcare and seniors housing sectors. “It’s just a continuation of headwinds that have been affecting the nursing home business,” he says.

Quality mix slid 127 basis points nationally to 34 percent at the end of the second quarter, the NIC found. This is the lowest level in the data set’s history, which dates to October 2011. Year-over-year, the drop was 142 basis points. The main driver was a decline in Medicare patient day mix, which fell 129 basis points quarter-over-quarter and is at a time-series low of 12.1 percent, according to the report. Managed Medicare patient day mix also saw a seasonal dip of 41 basis points from the first to second quarter, which ended at 6.4 percent nationally.

While private patient day mix rose across the country from the first to second quarter, year-over-year this figure continued its descent, dropping 78 basis points to 8.8 percent, the NIC found.

The nursing sector, far from immune from frequent policy and regulatory changes, is set to see another change in Medicare reimbursements in October 2019. Skilled nursing operators are not expected to see an upheaval after these changes as they had after previous policy shifts, says Liz Liberman, healthcare analyst at the NIC. However, the changes could add further restrictions on operators as to how they administer therapy for those in post-acute settings, she says. “It wouldn’t necessarily have any kind of impact on occupancy,” she says.

When there are new policy changes, there tends to be a small spike in M&A activity, as smaller operators may opt not to undergo the changes, Liberman says.

Blanda says he has seen regional players look to acquire mom-and-pop operators who are exiting the business, because it has become too complex and expensive to work in.

Meanwhile, others are building continuum campuses and scale. “They’re looking to build some scale to their operations so that they can handle changes in reimbursements and make their operations more efficient,” Blanda says.

Despite the sector’s challenges, a summer 2018 report on the sector from real estate services firm CBRE asked survey respondents where they see the biggest opportunity for investment in seniors housing and care, and 17 percent said the nursing sector, the same as in the second half of 2017. However, respondents this year were more interested in opportunities in independent living, assisted living and active adult properties.