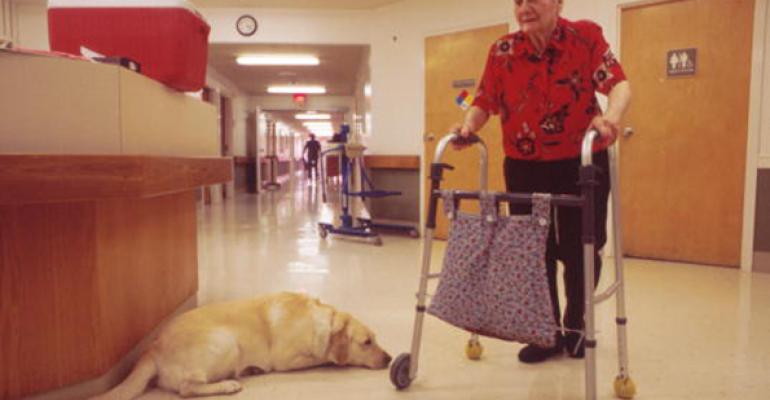 Over the past three years, more than 9,000 in the U.S. were cited for infection-control deficiencies.

(Bloomberg)—In 2017, a flare-up of scabies in a Downey, California, nursing home persisted for more than six months and left at least seven patients covered in rashes from the skin-boring mites before staff members corralled the problem.

A year later, norovirus swept through a Lakeview, Oregon, facility after staff members failed to contain the gastrointestinal illness that eventually sickened at least 16 of its residents.

Last year, inspectors spotted a woman in a wheelchair using her bare feet to propel herself around the hallways of a Columbus, Texas, nursing home with a bandage taped over her heel, lightly covering an open wound with a potentially contagious staph infection.

In each of these instances, state regulators concluded that the nursing homes violated rules for infection control and slapped the facilities with the most severe citation in their arsenal, saying the homes had put their residents in “immediate jeopardy.” And the nursing home operators paid federal fines totaling … zero. Federal regulators opted not to levy any financial penalty.

That pattern of light regulation has put nursing home residents at extra risk of contracting the Covid-19 virus, advocates say, even as federal officials this month vowed to stiffen oversight. Already, the virus has resulted in at least 26 U.S. deaths – with 19 of them linked to a Kirkland, Washington, nursing home. “The government has always treated these as paper violations,” said Brian Lee, executive director of the Austin, Texas-based nonprofit Families for Better Care.

In one instance last year, inspectors filed a serious citation against a Fort Worth, Texas, nursing home owned by the company that operates the Kirkland center, federal records show. In that Texas case, federal regulators assessed no fine against Life Care Centers of America Inc. of Cleveland, Tennessee. The company didn’t respond to requests for comment Monday.

Over the past three years, more than 9,000 of the 15,000-plus nursing homes in the U.S. were cited for one or more infection-control deficiencies, according to an analysis by Kaiser Health News. Of those, 109 were rated by inspectors as being severe enough to cause patients “harm” or “immediate jeopardy,” according to data gathered by Lee. Of these most severe violations, only 61 – or 56% – were hit with a financial penalty.

Advocates fear that after years of lax oversight, many nursing home operators are simply ill-prepared to deal with the growing outbreak of the new coronavirus, which has expanded to more than 600 confirmed cases in the U.S.

“This lack of enforcement could prove to be catastrophic,” said Richard Mollot, executive director of the Long Term Care Community Coalition, a New York-based nonprofit. “It’s an incentive to provide substandard care.”

A nursing home industry group disagrees, saying most of the infection-control citations stemmed from isolated instances that didn’t cause harm to residents.

“Fines are not an effective way to improve quality,” said David Gifford, chief medical officer at the American Health Care Association, in a written statement. “This could take precious resources away from nursing centers, which are already chronically underfunded and operating on extremely thin margins.”

The primary regulator of nursing homes in the U.S. is the federal government’s Centers for Medicare & Medicaid Services, or CMS, which is charged with monitoring the quality of facilities that take in patients with government-funded health insurance. CMS sets guidelines and contracts with state agencies to inspect the nursing homes. When state inspectors find violations, they recommend enforcement actions to CMS, which ultimately decides what penalty to impose.

CMS officials didn’t respond on Monday to questions about the number of fines imposed, citing a heavy volume of media requests.

The deadliest coronavirus outbreak so far in the U.S. has been at the Life Care Center nursing home in Kirkland, where the fatalities included a visitor and where, as of Saturday, 70 employees had developed symptoms. Dozens of the center’s residents remain quarantined in their rooms. At another Seattle-area nursing home, the Issaquah Nursing & Rehabilitation Center, two residents have been hospitalized for Covid-19.

The country’s 1.3 million nursing-home residents are particularly vulnerable because they’re generally older and have more underlying health conditions, like diabetes or heart disease, which make the virus more dangerous.

Nursing homes are further challenged because seniors sometimes don’t exhibit the same symptoms of an infection as younger people, or they may be unable to alert caregivers because they suffer from dementia. “It can be hard to diagnose an infection in a nursing home,” said Patricia Stone, professor of health policy at Columbia University School of Nursing.

Stone, who has studied infection prevention in nursing homes for years, says the industry has made some improvements, but still struggles with high staff turnover and inadequate infection-control training. “I worry about it,” she said. “We still have a long ways to go.”

The Trump administration sought to address these issues by announcing on March 3 that its oversight of nursing-home inspections would prioritize infection-control measures.

A day later, CMS announced new guidelines for the facilities, including screening visitors who have recently traveled abroad or those who exhibit symptoms like a fever or a cough. “We have raised the bar regarding infectious disease control in our nursing homes,” Vice President Mike Pence told reporters at a press briefing.

The focus on infection control represents something of a 180-degree turn for the administration, which has previously worked to lighten government oversight of the nursing-home industry. For instance, federal officials last year proposed altering Obama-era regulations that require nursing homes to employ at least a part-time infection-control specialist. They proposed that nursing homes could instead hire an infection-control consultant – a change supported by industry and opposed by patient-safety advocates.

A CMS spokeswoman said the proposed change, which is still under review, is aimed at providing more flexibility for nursing home operators to hire experts while requiring that they still work “sufficient time” at their centers.

Also, in 2017, the Trump administration began rolling back nursing home fines, urging regulators to use one-time fines instead of multi-day penalties for violations. That change contributed to a 34% drop in fines for nursing homes from 2017 to 2018, according to a report from NBC News.

Of course, weak enforcement at nursing homes is hardly new. A Government Accountability Office report from 2009 found evidence of “substantial understatement” of violations by state inspectors. Many inspectors told the GAO that they would report a violation at a lower severity, so they wouldn’t have to perform follow-up reports. Inspectors also told the GAO they sometimes faced pressure from elected officials to lower the number and severity of their violations.

Poor infection control can quickly turn a bad problem worse in a crowded nursing home. The most serious cases span everything from improperly sterilizing a glucometer, which pricks a finger to measure blood sugar, to failing to properly quarantine contagious patients.

In February of last year, a resident at the Garden Terrace Alzheimer’s Center in Fort Worth, Texas, suffered a bout of nausea and vomiting. The next day, at least three more residents fell ill. Staff members, however, didn’t adequately track the spreading illness, nor did they properly confine the sick residents to their rooms, according to inspection reports.

In one instance, an inspector observed a nurse exiting a sick resident’s room and failing to remove the booties covering her shoes before she walked into the dining room. Two days later, a nursing assistant left a sick resident’s room, but didn’t wash her hands before serving breakfast to healthy patients. Over 12 days, the suspected norovirus outbreak sickened 26 patients and eight staff members.

Inspectors found the infection-control missteps had exacerbated the problem and hit the facility with one of the most severe citations. But the federal government decided to forgo a financial penalty. Garden Terrace’s owner, Life Care Centers of America, also owns the nursing home in Kirkland where the coronavirus outbreak occurred.

Advocates like Brian Lee believe that the most effective way to get nursing homes to improve their practices is to hit bad actors in the pocketbook. “Enforcement is supposed to push nursing homes back into compliance to make sure people are safe,” said Lee. “It does the opposite if the feds don’t follow through with penalties.”

--With assistance from Dina Bass.

To contact the reporters on this story: Ben Elgin in San Francisco at [email protected];

To contact the editors responsible for this story: John Voskuhl at [email protected]