/sites/all/themes/penton_subtheme_wealthmanagement/images/logos/footer.png
Recent
Recent
Eight Must Reads for the CRE Industry Today (May 19, 2022)
May 18, 2022
Russian Billions Hidden in US Spur Backlash to Financial Secrecy
May 18, 2022
Mariner Wealth Advisors Expands in Michigan With Emerson Wealth Acquisition
May 18, 2022
Macquarie Alum’s GreenPoint Eyes $1 Billion for Real Estate Bets
May 18, 2022
Featured
The 10 Best and 10 Worst States in Which to Retire in 2021
Jul 15, 2021
Poll: 15 Classic Books on Investing and the Markets
Apr 03, 2020
Fifteen Must-Listen Business Podcasts for Advisors
Aug 14, 2020
Celebrity Estates: Jay Leno and Planning for Classic Car Collections
Feb 22, 2022
Coronavirus
brought to you by 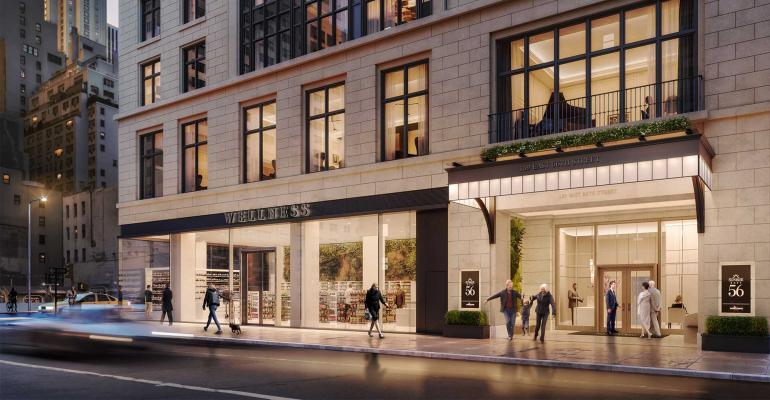 The team behind the project insists assisted living can reduce the isolation that seniors are feeling as the virus keeps visitors away.

(Bloomberg)—By the end of the year, New York City will get three posh assisted-living towers offering seniors spa treatments, gourmet meals and chauffeured rides along with their daily care.

The projects were built on a bet that a surging population of wealthy elders would pay hefty sums -- starting around $13,000 a month in Manhattan -- to stay near their grown children, in a vibrant urban center, when they could no longer live alone.

Then Covid-19 upended it all.

The virus, which disproportionately harms the elderly, spread quickly through senior-care facilities across the country. Indoor social events, such as wine tastings and other highlights of assisted living, have become untenable. The adult offspring of potential tenants haven’t yet returned to their Midtown offices and may even have moved to the suburbs. With Broadway shuttered and cultural attractions at minimal capacity, the city’s vigor, and the top rents it helps command, is indefinitely on hold.

“New York really needs to be humming for this to work,” said John Kim, an analyst at BMO Capital Markets who covers Welltower Inc., co-developer of Sunrise at East 56th, set to open in November. “I think it’s going to be very challenging to lease it up.”

Just before the pandemic, assisted-living facilities in Manhattan reached record occupancy of 96%, the result of high demand paired with a 15-year period when not a single new unit was built, according to the National Investment Center for Seniors Housing & Care.

The virus abruptly changed the equation. During the second quarter, when New York was locked down, occupancy fell to 88%, the lowest since 2010. A moratorium on move-ins, in the city and nationwide, meant residents who left, passed away or moved into higher levels of care couldn’t be replaced.

“Certainly, it could take a little longer for the area to absorb that new product along with the decline in occupancy that the pandemic had wrought,” said Lana Peck, a senior principal at the Maryland-based nonprofit.

New York’s luxury senior towers, where residents pay completely out of pocket for perks and modern design rivaling the city’s glitziest condo towers, were a new concept in 2016 when the first two ground-up projects were announced. With sales of high-end apartments slackening, and demographics pointing to a “silver tsunami” of aging boomers, developers sensed a new opportunity.

“Seniors deserve to have options and not have senior living be an afterthought,” said Bevin Littlehale, a New York-based managing director at Hines, Welltower’s partner on the East 56th Street project, which will be operated by Sunrise Senior Living.

Opening such a property during a pandemic has its challenges, but assisted living can reduce the isolation that seniors are feeling as the virus keeps visitors away, according to Jenifer Salamino, chief operating officer at Sunrise. Even socially distanced activities provide some human connection, she said.

“We have a full dining staff, housekeeping staff, 24-hour doorman and there will be 24-hour nurses,” Salamino said, adding that some activities, like art projects, can be brought into residents’ rooms. “When you are home alone, some people don’t even have a home health aide -- they are literally alone.”

The partners wouldn’t disclose how many of the building’s 151 apartments have been leased, but said 95% of inquiries have been from New Yorkers already living nearby. Monthly rents start at $13,750 for assisted living and $21,000 for memory-care units.

Covid protocols will guide life at the senior towers for the foreseeable future. On Manhattan’s Upper East Side, Omega Healthcare Investors Inc. and Maplewood Senior Living have installed air purifiers and ultraviolet light sanitizers at their tower, called Inspir.

Residents will be screened daily for symptoms, wear masks in common areas, and events, like an improv comedy class or guided tour of the boroughs, will happen online.

The property -- promising a bar with signature cocktails, a theater and a Mercedes chauffeur service -- is awaiting final approval by the state health department and could open by early November. Deposits have been placed for 75 of the Inspir’s 215 units, said Greg Smith, chief executive officer of Maplewood Senior Living.

The partners are in contract to acquire a site for a second Manhattan project, and are pursuing one in London as well.

In Brooklyn, a nearly century-old tower has been reimagined as senior housing at Watermark at Brooklyn Heights, with an art gallery, a heated lap pool and a wood-paneled library featuring a whiskey bar. A ballroom from the property’s days as a hotel is now a restaurant, the W Room, and tenants will have wine storage on-site.

Just over half of the 275 units at the project -- developed by Kayne Anderson Real Estate, Tishman Speyer and Watermark Retirement Communities -- will be allocated to seniors who can live independently. The rest will be divided between assisted living and memory care, at rents as high as $20,000 monthly, a spokesman said. As of last week, about 20% of the residences were leased. The property opened earlier this month.

But that might prove to be a selling point. As families again get comfortable placing their loved ones in assisted living, they’re likely to seek out pricier facilities, which have the resources to pay for expensive virus-protection measures, he said.

“People who can afford this,” he said, “will look to these higher end, well-run, more efficiently managed facilities as a safer place for their parents.”