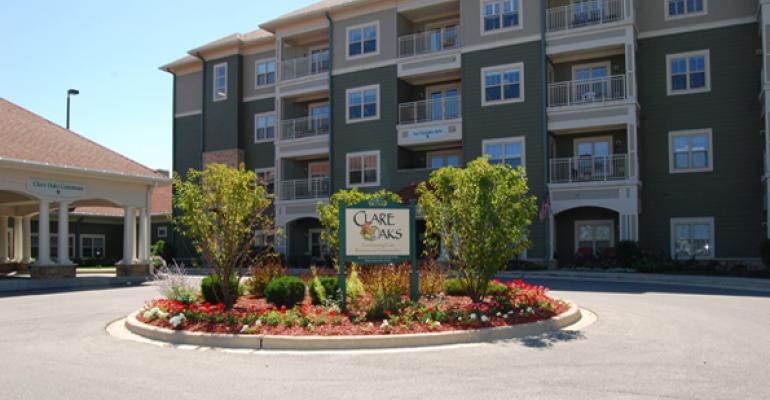 Lesson from CCRC Bankruptcies: Put Skin in the Game

The bankruptcies that beset a number of seniors housing properties in the past seven years can be traced back mostly to timing issues, opening up at or near the height of the recession, but there are also a few lessons that can be learned as investors prepare to start filling the expected lump of demand in the next two decades.

For the most part, financing troubles have come in situations where nonprofit operators bet on collecting fees that never materialized. “Even by 2007, the pricing model for these new properties was unsustainable,” says Nathan Coco, a partner with McDermott Will & Emery, who represented bondholders in the bankruptcy of 53-story Clare at Water Tower in Chicago. The Franciscan Sisters of Chicago Service Corp. had sponsored the $270 million luxury seniors tower, which opened in 2008. The owners defaulted on the project’s bonds when the economy crashed and they couldn’t find enough residents to pay the facilities’ pricey entrance fees, which were as high as $1.2 million.

“The residents they had planned to get couldn’t sell their homes, and saw their investment portfolios slashed. It was just bad timing for a lot of those projects delivered right when the bubble burst,” Coco says.

A partnership of Harrison, N.Y.-based Senior Care Development LLC, Fundamental Advisors L.P. and Life Care Cos. LLC took over the Clare at Water Tower property in April 2012, bidding $53.5 million and assuming about $57 million in resident deposits.

David Reis, CEO of Senior Care, says he believes the bankruptcies of continuing care retirement communities (CCRCs) can be traced to one business model of the affordable seniors housing properties. About one-third of all the affordable properties built between 2005 to 2009 have had financial troubles, he said, because underwriters set up non-profit boards that had no experience handling seniors housing projects. These boards and developers gained high-priced bonds but contributed no equity themselves.

“They borrowed 100 percent of the project’s cost, took out huge fees for themselves, then were surprised when they didn’t have enough working capital and the sponsor doesn’t have the wherewithal or the experience to write a check to weather the storm,” Reis says. “We need to get away from this model. With the for-profit companies, or the larger nonprofits that own five to 10 seniors properties, I think I can name only one or two that had financial trouble.”

One recent example of a troubled project is Clare Oaks, a retirement community in Bartlett, Ill., sponsored by the Sisters of St. Joseph of the Third Order of St. Francis. The 284-unit community emerged from Chapter 11 bankruptcy protection on Dec. 31, 2012, after a more than a year-long recapitalization and restructuring process. The owners of the property filed for Chapter 11 in December 2011 after failing to reach an agreement with lenders. The court approved its bankruptcy plan in November 2012, and the facility received new bonds from the Illinois Finance Authority on Dec. 20, 2012.

Senior Care was the debtor-in-possession lender for Clare Oaks, and Reis says that the restructure was expensive for the financiers involved. Bondholders lost more than $20 million because of the IFA’s $90 million restructured bond issue. “The banks had to put up $14 million cash, almost as much as what was bid, but they got to keep the property,” he says. “This was another one where the property just didn’t have the right capitalization from the start, though the nonprofit did try to throw money in. They just didn’t have enough cash during the fill period.”

According to Reis, the paradigm shift needed is for the non-profits to add more equity into projects, “or the past is going to repeat itself.” Other experts, such as Paul Rundell, managing director with Alvarez& Marsal Healthcare Industry Group, agree that loose capital will continue to cause problems if not checked. Rundell, a certified insolvency restructuring advisor, assisted Clare Oaks in its year-long effort.

“I think in the short term, CCRC’s will continue to be under distress,” Rundell says. “Over the long term, senior living has a lot of positive factors that will help keep the industry attractive to investors, one of which is demographics. The good operators will thrive as they learn to live with lower reimbursement rates and efficient staffing.”