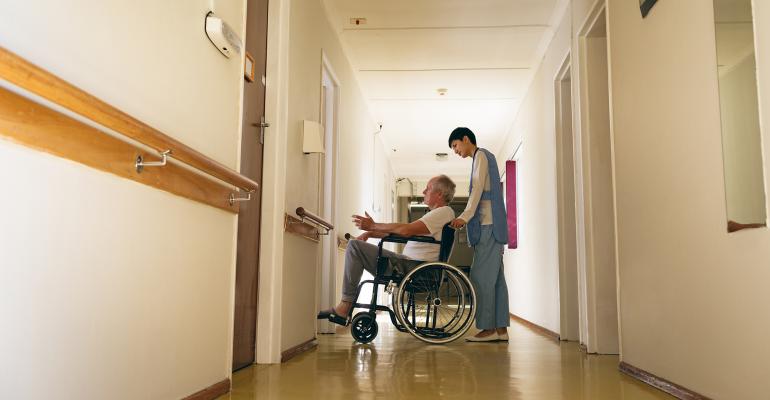 (Bloomberg)—Minimum staffing requirements for nursing homes that were hit hard by the pandemic will remain a goal for the Biden administration, according to a top health official, despite protests from the industry that facilities lack funding to hire more personnel.

“When we talk to people on the front lines in nursing homes, the number one issue that we hear about is staffing,” Chiquita Brooks-LaSure, who leads the Centers for Medicare and Medicaid Services, said Tuesday in an interview. “And I think funding is a part of that, but it is not the whole picture.”

The staffing proposal is part of a broad agenda President Joe Biden released last week to bring greater scrutiny to a U.S. nursing-home industry whose patients and workers have been devastated by Covid-19. Over 201,000 residents and staffers have died from the coronavirus in nursing homes and other long-term care facilities, according to the Kaiser Family Foundation.

Nursing facilities have lost 238,000 positions, about 15% of their workforce, since the pandemic began, industry groups say, even as employment in other health-care settings has rebounded. They are challenging the administration’s plan to require minimum staffing ratios, boost funding for inspections and oversight and heighten transparency around who owns nursing homes.

“We want to hire more caregivers, but there are no workers to hire,” the American Health Care Association and the National Center for Assisted Living said in a letter Tuesday to administration officials.

The group asked the administration for $20 billion in provider relief funding to help with the staffing problem that the group calls the worst on record.

Brooks-LaSure said the administration wants to strengthen “the long term sustainability of the workforce” and attract more workers at all levels. “I think we see this as a holistic approach, and certainly making sure that funding is adequate is a piece of that.”

In 2001, CMS issued a report to Congress that recommended a minimum standard of 4.1 hours of nursing time per resident each day. No U.S. states meet those guidelines today, according to a watchdog group’s recent report, although Washington, D.C., does.

Health officials also want to address other concerns for workers beyond wages, she said, like opportunities for career development.

In addition, the administration plans to push for more transparency in nursing homes’ ownership. Biden officials have particularly raised concerns about the growing role of private equity in the industry.

“We have seen increased reports that private-equity ownership is associated with worse outcomes. And so that certainly concerns us,” Brooks-LaSure said. “Our focus is on increasing transparency and making changes that will ensure that dollars are being used to improve quality.”

The administration is also seeking an additional $500 million from Congress to bolster oversight and facility inspections.

“We’re understaffed,” Brooks-LaSure said. “It really will help us with the backlog.”