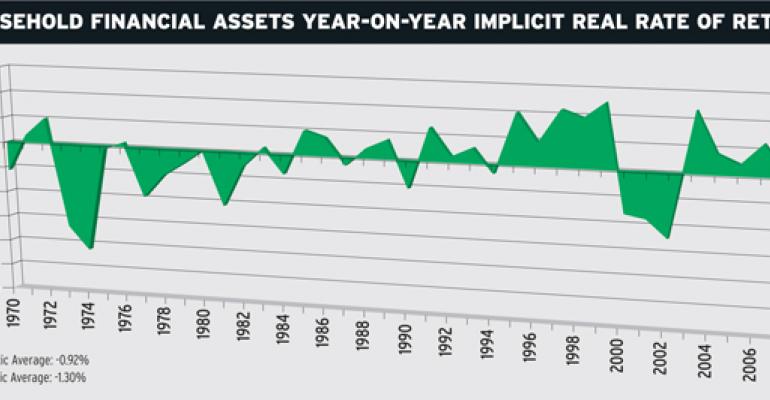 Over the last 10 years, if you had simply preserved your wealth, that would be considered achievement. But are these last 10 years unusual? A longer term perspective shows that actual real returns earned by investors, on average, have been pretty anemic, with a few exceptions, driven primarily by periods of sustained bull markets in equities. The trouble with the traditional stated rates of return

Over the last 10 years, if you had simply preserved your wealth, that would be considered achievement. But are these last 10 years unusual? A longer term perspective shows that actual real returns earned by investors, on average, have been pretty anemic, with a few exceptions, driven primarily by periods of sustained bull markets in equities.

The trouble with the traditional stated rates of return — the 10 to 12 percent numbers that get thrown around — is that they are measured on a gross basis, which creates unrealistic investor expectations. Of course, gross returns fail to take into account inflation, taxes, fees and the impact of market timing (since most retail investors rush into the market at the top and bail out at the bottom). These factors significantly erode the ultimate returns to the investor.

Despite the Ibbotson charts showing impressive long-term gains, on average, retail investors — your clients — have made very little actual return on their savings.

In fact, we estimate that long-term real (adjusted for inflation), actual (after taxes, fees and market timing) returns for the average investor, to be around 0 percent.

To measure the historical real returns actually earned by average investors, we take two complementary approaches: a simple, macro, top-down view and a micro, bottoms-up view. Our data source is the “Flow of Funds” analysis published by the Federal Reserve.

The flow-of-funds analysis breaks down the economy into several broad sectors: households, business enterprises, government, financial institutions and “rest-of-the world.” For each of these sectors, the analysis provides a balance sheet and the annual financial flows. For example, the flow-of-funds analysis for U.S. households for for 2006, 2007 and 2008 shows us how much wealth was held in various different securities and instruments and what the net gain or loss was. A quick look indicates that between 2006 and 2008, household financial assets did not grow much before plummeting in 2008.

In the top-down analysis, we take a deliberately simple viewpoint: an analogy between the overall household financial assets (HHFA) and a giant savings account. All amounts are adjusted for inflation, using the GDP price deflator, a commonly accepted inflation metric, and expressed in 2008 dollars.

We assume this is simply the result of the new inflows and the return on the existing assets. Of course, the reality is more complex: The financial assets generated interest and dividends, which were commingled with household disposable income and some were simply spent on consumption, some were reinvested, etc.

However, if we accept the simple analogy with a giant savings account (and ignore interest and dividends for a moment), we can impute a rate of return by subtracting the net new acquisitions of financial assets from the overall change in household financial assets. The imputed return is thus $1,120 minus $615, or $505 billion

We applied the same methodology to estimate actual historical rates of return earned by U.S. households since 1970. This yields the following series of real, inflation-adjusted, after-tax, after fees, actual returns earned on the overall household financial assets owned by U.S. families.

Obviously our top-down macroeconomic analysis only reflects overall averages, including some investors who have done very well, such as Warren Buffet and Peter Lynch, and many investors who have been wiped out. However, on average, most households earned a dismal return on their savings between 1970 and 2008: -1 percent a year.

We can also estimate return rates in a bottoms up manner, based on the household financial asset portfolio, as given to us by the Fed's Flow of Funds. We need to hypothesize rates of return for each asset class and likely ranges for the asset management and distribution expenses. The spreadsheet above documents our analysis.

We thus estimate the net return, after expenses, at 7.9 percent. Sounds good, until you realize this is before taxes and inflation. If we assume an average tax bite of 30 percent, the remaining return is 5.5 percent. Inflation then takes an another annual bite of some 4 percent over the long run, leaving a “net net” return of around 1.5 percent.

And this estimated return ignores the effects of market timing — investors buying hot dots in hot markets and then bailing out at the bottom — after they have lost money.

What Do You Offer?

The top-down estimate and the bottom-up estimate are not far apart. This indicates that retail investors probably net around a zero percent return, on average, for the long run. Some of these return-dampening factors are out of your and your clients' control (inflation, tax rates). But some are not, such as overly active trading and chasing the hot dot. Meanwhile, commissions and management fees can drive the cost of your services up to 1 to 2 percent (or more) on assets each year.

For the retail investor, the takeaways are obvious — you help them invest across many asset classes for the long term. But these return numbers suggest that retail investors should seek investment products and FAs with low fees and expenses. Put another way: How can you justify charging client 1 to 2 percent (or more) a year on assets for returns that are a couple of percentage points — in good times?

Investment firms and financial advisors need to revisit their value proposition for customers. It should be based around disciplined investing, tax minimization, protection against inflation and avoidance of disastrous losses.

If it is to remain relevant, the investment industry must enhance its service and reduce the costs and the fees it charges clients through technology improvements, economies of scale (more AUM per FA) and better product design — that is, tax-advantaged products and other low-cost, passive investments, such as ETF-based products.

The industry should also revisit compensation structures in order to better align the interests of the firms and the advisors with those of investors. If urgent action is not taken, the exodus of clients toward the independents and online platforms will continue.