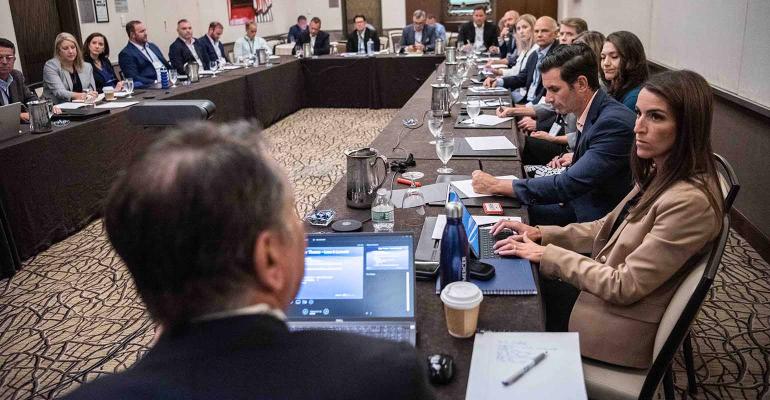 Broker/Dealers Are Living in the Convergence of Wealth and Retirement

How to best grow their retirement practices was the main topic at the fourth annual Broker/Dealer Roundtable and Think Tank.

Broker/dealers have been living in the convergence of wealth and retirement while most record-keepers and retirement plan advisors are just entering it.

Even so, the leaders of retirement for b/ds that gathered at the fourth annual RPA Broker/Dealer Roundtable and Think Tank held in NYC after the Record-Keeper Roundtable and before the eighth annual WealthManagement.com Industry Awards still struggle to bring their firm’s institutional and retail businesses together.

Related: 401(k) Record-Keepers Eager to Facilitate the Convergence of Wealth, Retirement and Benefits at Work

Main themes around the convergence included how to grow and show their firms the full value of retirement plans as well as access to data. More plan sponsors are asking for financial wellness tools to help workers as retirement plans have become more of a priority, which is a major shift.

Specialists with 50% of their revenue coming from defined contribution plans account for 10% of all advisors with a plan; 35% are intentionalists with DC revenue at 15% to 49% with the rest are accidentalists, or blind squirrels. Though these percentages were similar across difference types of BDs, there were significantly divergent business models on how to best grow the retirement plan business, which included:

View an overview of the major opportunities and challenges facing broker/dealers in the defined contribution market.

BDs agreed that they need to collaborate on standardizing and getting access to data from record-keepers with three data aggregators in the room, including Morningstar, which has built data pipes to 26 record-keepers, Envestnet and RPAG. Leveraging behavioral finance even more and bringing wealthtech into the DC market by showing what problems their peers were solving were other ways to share.

They asked WealthManagement.com to highlight the opportunities for wealth advisors with DC plans and perhaps extend the LPL research to show how advisors that embrace convergence are more profitable. Expanding the Wealthies to include more providers that support RPAs and wealth advisors that are helping DC participants was also suggested.

It was a robust and lively discussion by a group whose wealth management capabilities are far ahead of RPA specialist firms but struggle to get resources within their own firms as the convergence of retail and institutional worlds collides.