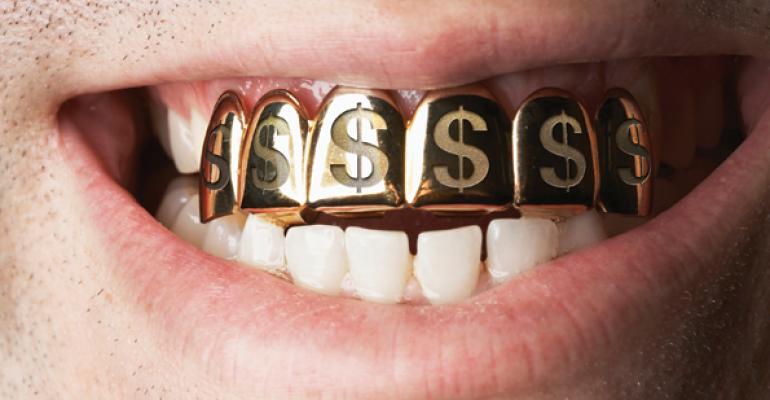 RIAs are loathe to increase rates, believing it alienates clients. But industry insiders say advisors have more juice than they suspect. Here’s how to get a raise.

About two years ago Foster Group, a fee-only registered investment advisor headquartered in West Des Moines, Iowa, decided it needed to deliver bad news to some 600 of its 850 clients, bad news in the form of higher fees. Managers at the firm—founded in 1989 and currently holding $1.2 billion in AUM—felt they had good reasons for going ahead with the move. A review of market pricing revealed that Foster’s fees were below average, in some cases painfully lower; some clients were paying as little as 30 to 40 basis points on their portfolios, says Travis Rychnovsky, Foster’s leader of client services, IT and operations. The sweet deals were a legacy from years earlier, when Foster recruited doctors in group practices; a team of physicians would collectively bring several million dollars in assets to the firm, but each doctor enjoyed individual fees that were based on the total assets the medical practice brought rather than each doctor’s particular contribution. As the medical practices added doctors, more assets were brought into Foster’s fold at the lower rates. Some investors were getting the 30 to 40 bps rate on portfolios as small as $300,000 to $400,000, Rychnovsky says. Change was due.

Many advisors at Foster, however, dreaded what was to come. The fear was that clients who had grown accustomed to paying a certain amount for the advisors’ services would take their business elsewhere if they had to pony up more for the same. Indeed, management felt it had to sell its own advisors on the new fee schedule as much as they would the clients themselves, Rychnovsky says. Under the new system, the least expensive of the three planned options was 60 to 80 bps; Foster planned to roll out the new fees in individual client meetings over the course of a year. Advisors marked the dates on their calendars and held their breath.

And then they exhaled. Rychnovsky says only about 3 percent of the 600 clients went elsewhere after being told about the price increases. In the course of the interviews, advisors told investors that significant pressures had come to bear over time on the rates they were receiving, he says. “We would remind the client of what the market would charge if they were to go elsewhere, and that was basically it,” Rychnovsky says. Eight out of 10 times there was “little to no discussion” with the client—“They would say they understood.”

The RIA industry continues to be a remunerative one. Charles Schwab’s annual advisor benchmarking survey last summer found that profits at median-sized firms (defined as having $212 million in AUM, $1.3 million in annual revenue) were up 14 percent in 2011, driven chiefly by stronger revenue. There are lots of ways to boost revenue, such as bringing on more clients or providing a broader service offering. But where pricing is concerned, many advisors appear reluctant to alter existing structures. Just 31 percent of firms review their pricing practices annually, according to “Pricing Strategies to Create Growth—An Independent Advisor’s Guide,” a report released last year by FA Insight and Pershing Advisor Solutions.

“They don’t feel comfortable going to ask for a raise,” says Chris Winn, president and founder of AdvisorAssist, a Pembroke, Mass. consultancy. For breakaway brokers leaving wirehouses and independent broker/dealers to start their own RIA, the pricing problem may feel particularly delicate. On the wirehouse side, the costs of many services provided for clients are often embedded in the advisory or platform fees, which usually average 150 bps. Some advisors who switch to an RIA may feel pressured to absorb those costs in the interest of not antagonizing clients they hope to bring over from the advisors’ former employers. Higher fees would be one more different thing, on top of a new custodian and investment process, that clients would have to absorb, Winn says.

“Is it now, ‘Am I doing something better, or was I working them over in the past?’ That’s part of the fear in there,” he says. “I don’t want to do it dramatically different because then I have a whole story about the past when I want to talk about the future.” 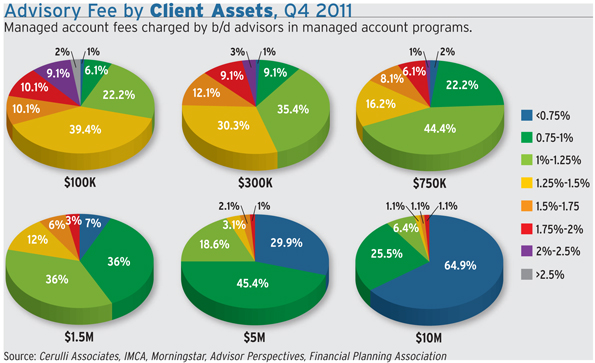 And yet the classic fee structure built around assets under management may not be the most efficient for advisors, particularly as costs increase around such things as compliance and practice technology. More than 85 percent of advisor revenue comes from asset-based fees, says Gabe Garcia, director for relationship consulting at Pershing Advisor Solutions. When markets slide, portfolio values decline and AUM-based fees fall along with them, even at times when advisors are providing the same or sometimes more services to clients.

“It’s a model that’s disconnected a little bit from the cost of delivery, and it’s really dependent on wealth and not the value of the service provided,” Garcia says. “There’s sort of a uniform set of services and expertise and resources provided across a very disparate client base. So you might have a $500,000 relationship and a $5 million relationship, both receiving essentially the same experience, resources, expertise, and services. But one is a profitable relationship and one is not because of the AUM model and the revenue that’s derived from that.” He likens the dynamic to a line attributed to Yogi Berra: We lose money on every widget, but we make it up on volume!

“You can’t have a sustainable business with that scenario,” Garcia says. So in order to price services properly, an advisor needs to know what it costs to provide them. It’s tricky, since many advisors don’t track time the way CPAs or lawyers do in their universe of billable hours. So questions emerge: How many meetings am I having with a client each year? Who’s working with the client—the principal advisor whose time is extremely valuable, or a less experienced associate advisor who can handle some of the chores at a lower cost? Some custodians offer RIAs programs on how to crunch these numbers; they also provide benchmark rate structures for advisors who are wondering about whether what they’re charging is above or below what the market will bear.

Segmenting a practice’s client base—delivering services that match the client’s value—is an exercise that challenges even the most sophisticated practices. Scott Slater, managing director of business consulting at Schwab Advisor Services, says that the top 20 percent of RIAs in its annual benchmarking study still draw 90 percent of their revenue from asset-based pricing even though they’re the most creative at using different pricing structures. Part of the problem with launching new pricing is the reluctance that advisors and staff at a practice may have about implementing it. Pricing discussions can be threatening to staff who aren’t leading the business, Slater says.

“Sometimes in some firms, people want to know why we’re doing this. You have to give them a bigger picture: ‘Here’s what it costs to run the business, here’s what (price increases) are going to do for our firm, to enable us to grow and create more opportunities for you. And here’s what the competitors are charging, and this is why we think this is an appropriate step to take,’ ” he says. “Once they understand it, then they’re more bought into the vision of where the firm is going and why this makes sense.”

Of course, RIA principals themselves have to be sure they have a good argument when they want to increase prices. “The first question I would ask an advisor if they’re doing a self-assessment is, do you deserve a raise based on the last four years?”  Winn says. “Did you react or not react? Did you do, in retrospect, what you would have done or what the client expected you to do? ... Cost is only an issue in the absence of value.”

Garcia sees two pricing trends gaining more traction with advisors now. Some FAs are moving away from minimum asset requirements and setting minimum fees instead—say, $10,000 a year. And pricing changes, when they’re applied, are applied disproportionately to investors at the lower end of the asset spectrum. That’s particularly true at top performing firms, he adds.

Whatever system is used, advisors who have been down the road often recommend face-to-face conversations with clients on the subject. That’s how Boston-based RIA Mintz Levin Financial Advisors LLC, with AUM of $1.1 billion, handled its last fee restructuring.The firm decided to apply a higher rate schedule it had adopted a few years earlier for new clients to the existing investors who were paying lower fees. Mintz Levin’s basic structure had started at 90 bps on the first $500,000 of assets; the new schedule called for 100 bps on the first $1 million, says Bob Glovsky, the firm’s president. (It merged last summer with The Colony Group, another Boston RIA, where Glovsky is now vice chairman.) The plan took a year and finished in 2010.

“We talked to them about what we thought the marketplace was, we talked about what our new clients were paying, and we asked them to adjust to the new schedule,” Glovsky says. “The whole conversation we had was a question about fairness and value. Did they feel what we were asking for was fair, and did we provide the value? And if they didn’t, we said, ‘OK, that’s the end of the discussion, we’ll bring it up again in a year.’ ”

Nearly everyone agreed, he says; those who balked were on board a year later. Part of the argument Mintz Levin made was the breadth of its wealth management services, including retirement modeling, estate and insurance planning, tax issues, philanthropy, and analysis of 529 plans. “What we got from them was a realization that they did value what we did,” Glovsky says.

Indeed, industry experts agree that fears over client departures when faced with rate increases exist only in the imagination of advisors, provided they can demonstrate value. David Canter, executive vice president of practice management and consulting at Fidelity Institutional Services, calls it “a tempest in a teapot....Most advisors already have a pretty well-defined value proposition that their clients understand.”

“I think the concern is obviously there,” says George Tamer, director of strategic relationships at TD Ameritrade. “But we know from some surveys that clients are actually willing to pay more for a better service experience, and that’s across industries....It boils down to what sort of expectations you’re going to set with your clients, and the definition of what your firm is. We use the analogy, Are you going to be the Four Seasons or the Holiday Inn? If you’re going to be the Four Seasons, you’re going to need a fee structure that supports that.”

Rychnovsky calls the advisor-client relationship a two-way street. He’s philosophical about clients who leave when prices get raised—either they didn’t understand the value the firm was providing, or the relationship wasn’t a good fit, he says.

“I wish I had known at the beginning that we were only going to lose 3 percent of the clients that we were going to have conversations with,” he says. “Had we known that going into it, we probably would have accelerated the conversation.”