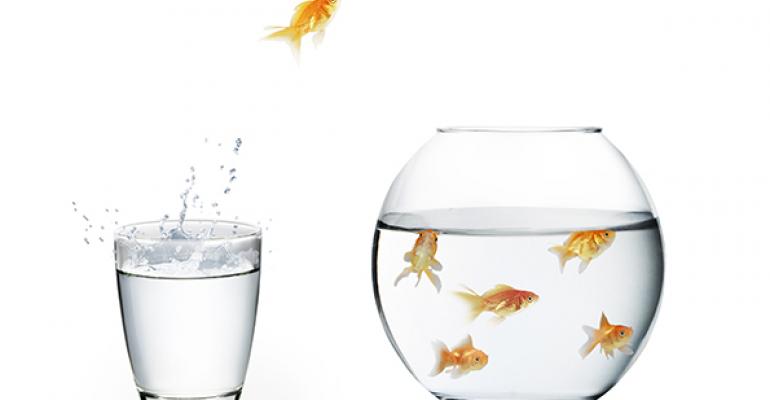 More advisors are looking to leave the wirehouses and brokerages by joining an existing registered investment advisory firm, rather than starting their own.

“Many advisors are daunted by the task of forging their own path and the accompanying headaches,” Cerulli Director Bing Waldert said in a statement. “Advisors considering the RIA channel are increasingly looking to join existing firms that can provide them with not only the necessary operational infrastructure, but also a sense of community.”

This is played out in the industry merger and acquisition activity as well. Over half (53 percent) of the M&A deals in the first three quarters of 2015 were breakaways joining existing RIAs, according to DeVoe & Company’s data. The company tracks M&A activity related to advisors with over $100 million in assets.

This is a substantial increase from the 38 percent of deals that were comprised of breakaways in 2013. They made up 54 percent of the overall transactions reported in 2014.

“Many advisors when they break away think that starting their own company sounds fantastic. But once they start to take a harder look at it and realize they have to go sign a lease, buy a copier and fix the copier when it’s jammed, they realize being an entrepreneur may not be as attractive as they thought,” founder David DeVoe said.

Overall, the number of breakaways joining RIAs is at an all-time-high for the industry. There were 22 breakaways with over $100 million joining established RIAs in 2013, 49 in 2014, and there have already been 46 such transactions during the first nine months of 2015, DeVoe said.

DeVoe expects the breakaway trend toward established RIAs to continue, adding that the expiration of wirehouse advisors' retention deals is a major driver. Cerulli found that a majority of wirehouse advisors' contracts will expire in the next five years. And when they do, some of these advisors will need a "soft" landing, DeVoe says.

“In some cases, you might be giving up some of the economics when you join an established RIA, but it can accelerate your transition and reduce a lot of the risks associated with the transition,” DeVoe said.

Moving in with an existing firm can also help allay advisors’ biggest fear—losing clients during the transition. About 65 percent of advisors cite declining client retention as their top concern when considering a move to the independent channel.

And brand recognition comes into play too. Nearly 40 percent of advisors say clients are resistant to leave a well-known and reputable brokerage firm. Advisors joining well-known RIAs may face fewer issues when presenting the switch to clients.

“In many cases, end clients might feel better or safer if you’re joining an established firm that’s already a going machine, has an established platform and has hundreds of millions or even billions of assets under management in place—that could create some additional confidence,” DeVoe said.

“At the end of the day, any advisor leaving a wirehouse and is attracted to an independent model needs to take inventory of what they’re good at and what they want to handle, DeVoe said, adding that being self-aware is key to a successful transition.