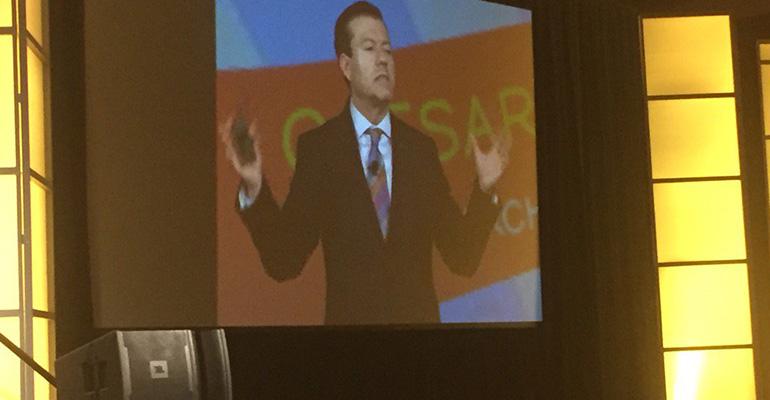 Republican lawmakers may revive some pathways to “revenue neutral” tax reform by limiting defined contribution plans, warns the head of the National Association of Plan Advisors. “If there is tax reform, there is no way we get through this unscathed."

Under the Trump administration, the fate of the Dept. of Labor’s fiduciary rule is still unclear. But there is a policy decision on the horizon that may have even bigger implications for advisors to retirement plans: Republican-led tax reform.

Namely, what happens to defined contribution plans, and their tax-deferral benefits, under a new Republican-led tax regime?  That, according to Brian Graff, the CEO of the non-profit American Retirement Association, has “anxiety triggering" repercussions for the retirement plan industry.

“Tax reform is definitely something Republicans ran on. Then all of a sudden they won, in a way they didn’t expect. So now they are in a position where they have to govern,” Graff said in his keynote address to over 900 retirement plan advisors attending the annual National Advisor Plan Association 401(k) summit in Las Vegas on Sunday.

The last time there was major tax reform, in 1986, Graff reminded the attendees that plan participants saw their 401(k) contribution limit brought down from $30,000 to $7,000. Generally speaking, politicians see lowering tax breaks for workplace plan contributions as a fairly easy way to plug the loopholes needed to pay for tax cuts elsewhere. If you went to the executives of American companies, and asked them which do you prefer, limits on tax deferrals to 401(k) plans or lowering capital gains taxes, “which way do you think that would go?” Graff said.

It would be a mistake, he said, because Americans likely wouldn’t be saving anything at all for retirement without the workplace plans. Those who have access to one are 15 times more likely to save for retirement than saving on their own, according to Graff.

Republican talking points around tax reform centers on the need to lower them, yet there isn’t consensus between the Trump administration and Congress on what that looks like. Trump wants tax cuts without regard to the impact on the deficit; Paul Ryan, speaker of the House, in his plan, claims lowering taxes won’t increase the deficit as it is “plugging the loopholes" to pay for it. Senate Majority Leader Mitch McConnell has said any tax cut package needs to be “revenue neutral,” meaning one that would keep the budget balanced.

The House GOP Tax plan has in its 10-year revenue raising provisions plans to eliminate the Alternative Minimum Tax and the estate tax, as well as all itemized deductions save for mortgage interest and charitable contributions, eliminating some business tax credits and, most controversially, taxing foreign-manufactured goods at the border. Given that the border adjustment tax will be very difficult to pass through Congress, lawmakers will go looking for other ways to raise revenue, and one of the ways they may do that is by bringing back some provisions of the 2014 comprehensive tax proposal by then House Ways and Means Committee Chairman Dave Camp.

The Camp plan called for freezing 401(k) limits over 10 years. It also would have cut in half the limit that could be tax deferred, mandating the rest go into a post-tax ROTH account. It would have eliminated 403(b) and 457 plans. To Graff, some form of the Camp proposal would have to be part of the current tax reform package if it’s going to be budget neutral. “If they do tax reform, there is no pathway where we get through this process unscathed. It seems absurd they would cut the 401(k) level, but you have to understand that in tax reform everything is a tradeoff.”

Graff showed the attendees a chart which showed that 81 percent of the tax savings from the lowering of capital gains taxes would go to those making more than $200,000. Combine that fact with limits to worker retirement benefits might make the moves against 401(k)s politically untenable, but given his conversations with some politicians making these decisions, he said, many “don’t understand the relative importance of retirement plans.”