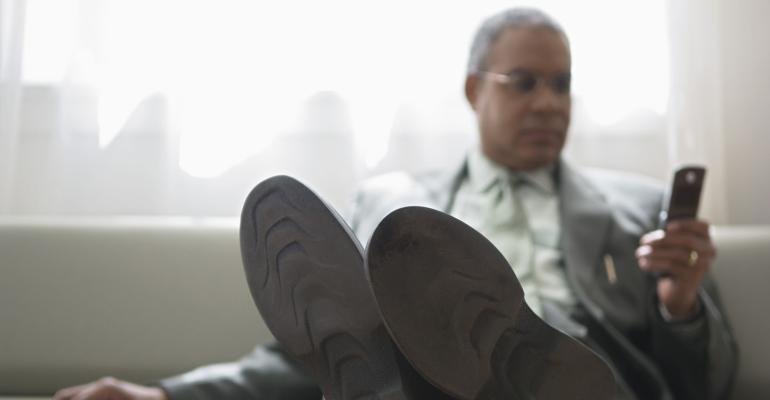 When Will Your Clients Age Out of Their Careers? Check This Chart

(Bloomberg) --One way to prepare for retirement is to save. Another way: Don’t retire.

It’s surprisingly common to put very little aside and hope you never need to hang up your cleats for good. Among investors under age 35, more than four-fifths (83 percent) say they plan to work during retirement, according to a survey released this month by Merrill Edge. It’s not just millennials: 79 percent of Generation X and 64 percent of baby boomers who are still working agree.

And how many retirees surveyed actually have some sort of job?

That would be 17 percent.

From a financial perspective, working into your 70s or 80s can be a great idea. It’s also completely unrealistic for many workers, especially if they want to stick to their chosen profession. It’s not just blue-collar workers with physically demanding jobs who can’t work forever. Even office workers need to prepare for the possibility that their careers will have a natural shelf life.

“As white-collar workers, we tend to believe we’re immune to the factors that cause blue-collar workers to retire early,” Boston College economist Geoffrey Sanzenbacher said at a recent conference.  His research, done with colleagues at Boston College's Center for Retirement Research, shows how “age-related decline” hits even well-educated professionals.

As we get older, not all our skills decline at the same rate. And in some ways, we get better. Older workers tend to be more knowledgeable than younger workers, research has found. Though it can take longer for older people to learn new skills or process new information, they are often much better at tasks they’ve practiced extensively. Physical ability varies, too. An older worker who can’t balance on a roof or deliver a dishwasher might have no trouble holding on to a broom.

Taking these differences into account, the Center for Retirement Research used U.S. government data to rate each of 954 occupations on the likelihood that its required skills will decline with age. The result was a “susceptibility index,” with compensation and benefits managers ranking lowest and dancers at the top. The researchers then looked at data on when people actually retire. Controlling for other factors, they found that people in occupations that ranked higher on the susceptibility index were indeed likelier to retire early. A white-collar worker ranking higher than 75 percent of the group was 7.5 percent more likely to call it quits before age 65 than a worker in the 25th percentile.

Why are some white-collar jobs more susceptible than others? The answer lies largely in the extent to which they require different types of intelligence.

“Fluid intelligence,” your ability to process new information and situations, tends to decline with age. Meanwhile, “crystallized intelligence,” your knowledge of facts and how to perform particular tasks, generally increases through your 50s and 60s, researchers have found, with little decline after that. That’s one reason designers and stock traders rank higher, or are more susceptible to decline, than, say, teachers and academics.

“The notion that all white-collar workers can work longer, or that all blue-collar workers cannot, is too simplistic,” the study’s authors concluded. For example, photography, a job that can require lots of fluid intelligence, can be more susceptible to age-related decline than jobs as cooks or cleaners, which depend on physical and cognitive skills that last late into life.

Not all the news about aging is bleak. While the health of one segment of the U.S. population has recently gotten worse, Americans on the whole are living longer, healthier lives than ever. A record number are working past age 65, and the share of seniors with dementia has plunged, from 11.6 percent in 2000 to 8.8 percent in 2012.

Still, even as some talk about raising the Social Security retirement age, we can’t all work as long as we’d like. Over the course of your career, you might want to move away from jobs requiring physical strength and quick thinking, and toward positions that use the knowledge and wisdom you’ve accumulated.

Exercise and good nutrition can help you stay productive longer. And you might want to try saving more, if at all possible. The IRS allows people 50 and older to save an extra $1,000 in individual retirement accounts and an extra $6,000 in 401(k)-style plans. These “catch-up” contributions may come in handy later on.