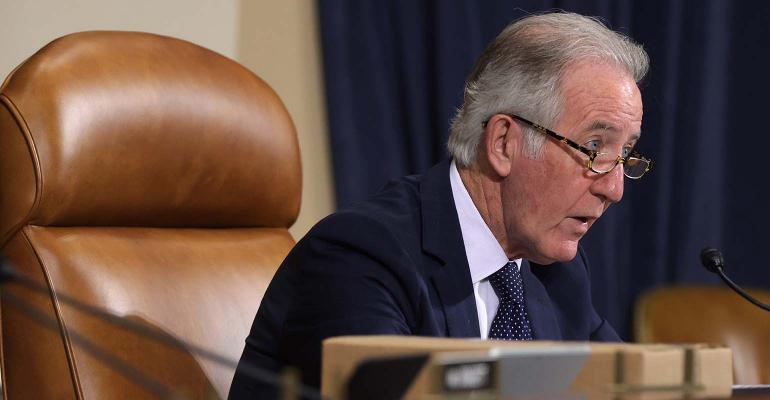 Top Democrat Seeks Probe on Use of Crypto in Retirement Accounts

U.S. Rep. Richard Neal wrote a letter to the Government Accountability Office that he’s worried about the lack of regulation for crypto investments.

Neal, a Massachusetts Democrat, said in a letter to the Government Accountability Office that he’s worried about the lack of regulation for crypto investments, which could in turn harm retirees’ savings pools if they put money in such assets.

“Concerns have arisen about the risks to older Americans’ retirement security of using retirement accounts to invest in cryptocurrencies due to their volatility and limited oversight,” Neal wrote in the letter Wednesday.

Neal asked the GAO to provide data about what type of employers are now offering crypto investments in tax-advantaged accounts, such as 401(k) plans. He also wants information about how plan sponsors determine crypto valuations and fees, and any safeguards related to those investments.

The latest market developments have highlighted the potential risk of investing in crypto. Valuations have tumbled in recent days as the Federal Reserve plans to raise interest rates to combat rampant inflation.

Bitcoin, one of the most popular crypto assets, has fallen 30% since Friday. Crypto markets have also witnessed two high-profile blowups since early May. Terra’s decentralized-finance ecosystem collapsed last month. And this week crypto lender Celsius froze withdrawals on a platform where it offered high returns, citing a need to “stabilize liquidity.”

Crypto regulations -- or the lack thereof -- have become a point of division on Capitol Hill that cuts across party lines.

The unlikely duo of Senators Cynthia Lummis, a Wyoming Republican, and Kirsten Gillibrand, a New York Democrat, last week released a crypto regulation bill that’s been heralded as friendly to the industry. That bill also would direct the GAO to conduct an analysis about the opportunities and risks of including crypto in retirement savings.

Lummis said in an interview with CNBC last week that including Bitcoin in a 401(k) is a “wonderful” idea as part of a diversified portfolio.

Gillibrand has a little more cautious attitude toward including crypto in retirement accounts, according to Evan Lukaske, a spokesman for the senator.

“Once a regulatory framework is put around it -- meaning a framework to create disclosure requirements, regulation, full transparency, safety and soundness -- such a measure could be considered,” he said in a statement.

Other lawmakers, including Senate Banking Committee Chairman Sherrod Brown, have been much more skeptical of the industry. Brown has said he is hopeful that the Securities and Exchange Commission will do more to regulate crypto.

The Labor Department has cautioned against investing retirement savings in cryptocurrencies.