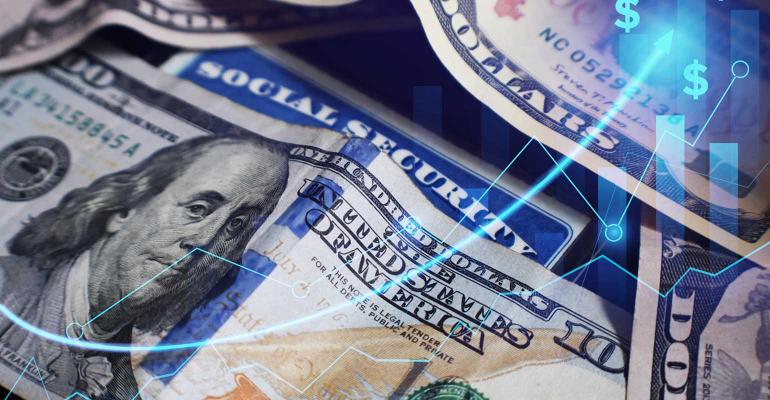 For protecting clients, Social Security is tough to beat.

Inflation has jumped back into the headlines for the first time in several decades—and it’s difficult to predict when consumer price increases will slow down, considering the economic disruptions caused by war in Ukraine, unstable energy markets and the ongoing pandemic.

Clients naturally worry about how inflation will affect their spending power in retirement—and true inflation protection is difficult to find without taking questionable investment risks. But there is one exception: Social Security. It’s the only component of our retirement income system built to provide risk-free, automatic inflation protection.

That’s a lower replacement rate than lower-income workers can expect but still an important counterweight against inflation. And, it’s a great argument for making Social Security as large a component as possible in your client’s plan by delaying their claims to boost monthly income.

Social Security’s annual cost-of-living adjustment (COLA) aims to keep benefits even with inflation. Social Security determines the COLAs each fall by averaging together the Consumer Price Index for Urban Wage Earners and Clerical Workers (CPI-W) during the third quarter. Annual COLAs are applied to future benefit amounts in the year that a worker turns age 62—so even if your client is delaying her claim, her future benefit is keeping pace with inflation.

The legislated COLA had bipartisan support, notes Nancy Altman, a Social Security advocate who has written several important histories of the program. “Progressives didn’t like the long intervals between adjustments, and conservatives felt that the increases being granted through legislation were politically motivated and larger than actual inflation merited,” she says.

The CPI-W isn’t really the best measure of inflation as it affects seniors, because it reflects a market basket of goods most relevant to working households. Housing, health care, food, transportation and charitable contributions account for most spending by households with residents over age 75, according to J.P. Morgan Asset Management research.

Health care costs are especially worrisome. Current trends are difficult to read due to the system shock of the pandemic, but looking at the historical record, costs have risen at a higher rate than overall inflation or economic growth.

The U.S. Bureau of Labor Statistics has an experimental alternative measure, the CPI-E, that aims to do a better job on this front. Over time, it has risen faster than the CPI-W, but it doesn’t always work out that way on an annual basis. In fact, the 5.9% COLA awarded for 2022 actually would have been just 4.8% as measured by the CPI-E, notes a recent research brief by the Center for Retirement Research at Boston College. That’s because the CPI-E gives less weight to transportation; thus, it would have missed the big spike in gas prices last year. The researchers conclude that a move to an inflation metric that better measures inflation affecting the elderly probably would require development of yet another index.

The importance of wages

Social Security benefits are determined by a worker’s history of wage income. In order to calculate the benefit, the Social Security Administration begins with what’s called average indexed monthly earnings (AIME). Calculating this figure involves averaging together a worker’s highest 35 years of wages up to the year when she turns 60 years of age, then indexing them up to reflect general wage growth in the economy over time. It’s a type of inflation adjustment—but one that uses wages, not consumer prices.

Next, AIME is applied to a formula that generates the primary insurance amount (PIA). This formula is weighted, which is what allows for the system’s progressivity—a lower earner receives a benefit that is a higher percentage of preretirement earnings than a high earner. The PIA is the sum of three separate percentages of AIME, usually in the year a worker turn 62, often referred to as bend points.

The PIA generated by the formula is essentially the amount you will receive at your full retirement age—the age when a worker qualify to receive 100% of the benefit you have earned.

Higher wages in the later years of work can boost your client’s benefit, but the impact is unlikely to be dramatic, since the formula averages together a full 35 years.

Not really. Higher wages boost the amount of Federal Insurance Contributions Act revenue (FICA) flowing into the system. What’s more, the FICA structure itself is geared to capture more revenue over time.

FICA has two components: 1) For the retirement and disability trust funds, employees and employers each contribute 6.2% of wages; and 2) for Medicare’s trust fund, each contributes 1.45% of pay.

For Social Security, there’s a cap on wages subject to FICA—but it is adjusted annually to reflect changes in the wage index. Just in the past decade, the cap has jumped from $110,100 in 2012 to $147,000 this year. (There is no cap on FICA tax collected for Medicare).

Various Social Security reform plans have proposed lifting or eliminating the wage cap as a way to further inject revenue into the system and restore solvency.

But Social Security does reflect that old adage that “a rising tide lifts all boats.” As consumer prices and wages rise, Social Security is designed to take it in stride.

Mark Miller is a journalist and author who writes about trends in retirement and aging. He is a columnist for Reuters and Morningstar, and contributes to The New York Times.