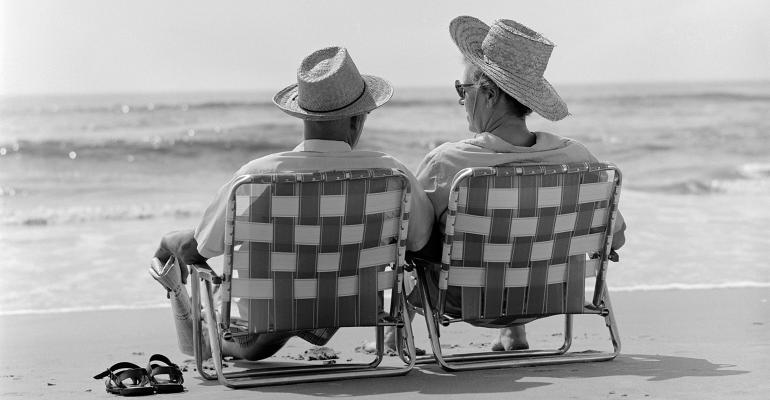 How well prepared are you for what your clients might throw at you?

Try your hand at these six questions about Social Security and then scan down the page for the answers. No cheating!

Q1: Everyone’s working longer—right? So, what is the average age that Americans file for Social Security? It must be going up, right?

Q2: What’s the better deal—filing for Social Security early or delaying a claim past full retirement age (FRA)? Are the pre-FRA reductions equal to the post-FRA credits?

Q3: Can your client file for a benefit from a divorced spouse, even if the ex doesn’t know about the claim?

Q4: Will your clients’ Social Security retirement benefits replace the same amount of pre-retirement income for my clients in 2035 as they do today?

Q5: You probably know that Social Security benefits are taxed as income. Will the odds rise or fall in the years ahead that your clients will owe taxes on benefits?

Q6: How is your client’s Social Security benefit affected if she claims benefits before her FRA but continues to work? You’ve probably heard there is a penalty—but how much? And is the penalty permanent?

People can claim as early as 62 and as late as 70. Many financial planners, journalists and other pundits advise people to delay filing for Social Security benefits in order to take advantage of delayed filing credits. But for all the talk, filing ages have not shifted dramatically over the past decade.

There has been a dramatic drop, however, in the share of workers filing at the earliest possible age—62. Among men, that has fallen from 42.6% in 2010 to 27.4% in 2018; among women, earliest filers fell from 47.9% to 31%. (The file-at-62 number is a bit misleading as it includes people who collected benefits before 62 because of a disability and then converted to regular benefits at their FRA.)

A2: Social Security’s flexible claiming age structure is designed to keep lifetime benefits constant for an individual with average life expectancy. The formula uses actuarial assumptions that determine the percentage reductions in monthly benefits for those who claim before FRA and delayed claiming credits for those who wait.

But the current actuarial adjustments are outdated, argues a recent research brief from the Center for Retirement Research at Boston College. The authors found that the current system fails to reflect improvements in longevity, lower interest rates and other factors.

Currently, benefits are reduced by 6.7% annually for three years before the FRA and increased by 8% for each year after the FRA. But the researchers contend that the delayed credit has become too generous—and the reductions for early claiming too large. “Increases in life expectancy would argue for smaller reductions for early claiming and a smaller delayed retirement credit for later claiming,” they write.

A3: Yes—filing for a divorced spouse benefit is a completely private affair between your client and the Social Security Administration. The SSA doesn’t report to the spouse that your client has inquired, or filed for benefits, on his or her record.

The Social Security Administration reports that 9.4% of all beneficiaries receiving spousal benefits were divorced in 2018. Among those receiving a survivor benefit, 8% were divorced.

The eligibility requirement: Your client must be currently single and have been married to his or her ex for at least 10 years; be at least 62 years old, which is the minimum Social Security eligibility age; and not already be receiving a benefit greater than the divorced spouse’s benefit.

Your client can file for spousal benefits even if your ex isn’t receiving his or her own benefits—so long as your divorce has been final for two years. Eligibility for an ex’s benefit is lost if you remarry, and you can’t file for benefits on your new spouse’s earnings record until you’ve been married to that person at least one year.

A4: No. Social Security replaces less preretirement income now than it did in 2010, and it will replace still less in 2035.

The Social Security reforms enacted in 1983 are gradually increasing the program’s FRA to 67 for workers born in 1960 or later. A higher retirement age acts as a benefit cut, since it raises the bar for receiving full benefits. Another factor reducing replacement values is rising Medicare Part B premiums, which typically are deducted from benefits. Finally, a growing number of Social Security claimants owe income taxes on at least part of their benefits (more on that below).

The net effect: The Center for Retirement Research calculates that an average earner retiring at age 65 could expect to replace 37% of preretirement income in 2010; that dropped to 35% in 2018 and will fall to 29% in 2035.

A5: The odds are going up. That’s because the income thresholds used to determine the taxable share of benefits are not indexed for inflation or wage growth.

About 40% of current beneficiaries pay taxes on some portion of their benefits, according to the Social Security Administration. The SSA projects that over 56% of beneficiary families will owe income tax on their benefits in 2050.

Roughly half of beneficiaries pay federal income taxes on some part of their benefits. Up to 85% of benefits can be included in taxable income using a formula called “provisional income.” This formula includes adjusted gross income plus tax-exempt income.

A6: Social Security applies an “earnings test” for anyone under FRA who works and receives retirement or survivor benefits. There is an earnings limit each year that is adjusted for inflation; in 2020 the annual amount is $18,240.

Your client earns full benefits if her income is below that amount. Above the limit, $1 is subtracted for every $2 of those earnings. A higher limit is applied in the year she reaches her FRA, and it is applied to earnings in the months before attainment of the FRA. In 2020, that annual limit is $48,600; $1 is withheld for every $3 earned over the limit.

But the withheld benefits are not lost permanently, so it’s not correct to refer to it as a tax or penalty. Those dollars are calculated back into your benefit when you reach full retirement age.

How is that done? Social Security uses a formula called the adjustment of the reduction factor.