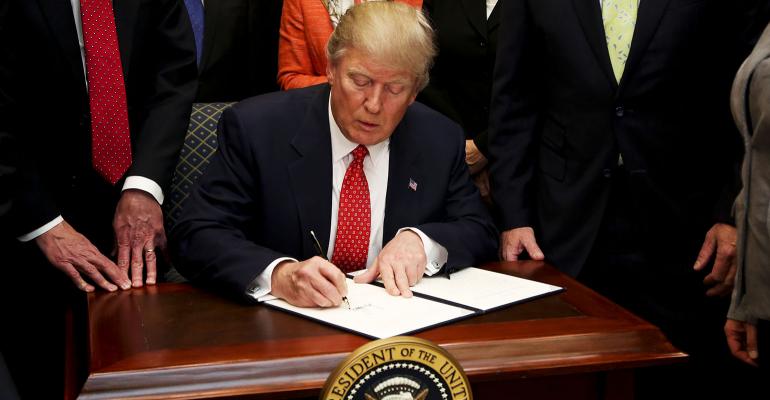 Trump’s executive order means guidance and recommendations around MEPs, and RMDs will culminate in federal proposals within a year.

On Friday, President Trump issued an executive order aimed at expanding access to workplace retirement plans, by directing the Treasury and Labor departments to assess and possibly increase workers’ access to multiple employer plans. He also laid out steps for updating the required notices and disclosures provided to retirement plan participants, as well as reevaluating the life expectancy data used to set required minimum distributions.

Open MEPs, which have had bipartisan support, are designed to give small businesses the benefits of retirement plans and spread costs across a number of employers, are viewed by the Trump administration as “an efficient way to reduce administrative costs of retirement plan establishment and maintenance and would encourage more plan formation and broader availability of workplace retirement plans, especially among small employers.” Put simply, open MEPs are a way to “close the retirement gap” between large and small employers, Labor Secretary Alexander Acosta said.

While cheering the study of the effectiveness of MEPs, Vestwell CEO Aaron Schumm will be viewing the results and recommendations with skepticism. Should barriers to MEPs become lower without adding appropriate safeguards, such as clarity on which entity carries fiduciary responsibility, Schumm said there’s a danger that employees could be signing up for plans they don’t understand. “From the advisory channel itself, it’s an easier offering for an advisor to say, ‘Hey, I’m just going to drop you in this open MEP,’” he noted.

But there’s a difference between more access and the right access. “It’s tough to say that that Open MEP is what’s best for that particular client-sponsor and the participants in that small shop,” Schumm noted. “If an advisor is going to be carrying their fiduciary responsibility and doing what’s in the best interest of their client,” he said, “I don't think they're necessarily doing justice to their client.”

Retirement planning provider and fiduciary outsourcing firm Pentegra sees an increase in MEP interest coming from the order, with the potential for a rise in the number of MEPs being offered should more accessibility be adopted. “MEPs have a structural advantage over other forms of retirement programs—they allow employers to be relieved of plan administrator responsibilities to a greater extent than is possible under a single employer plan structure, making them one of the simplest arrangements for employers who wish to offer retirement benefits,” Pentegra CEO and President John E. Pinto said.

Despite the challenges in properly structuring new rules that might come out of the executive order, Open MEPs and the reevaluation of RMDs could ultimately prove beneficial for advisors, both human and algorithmic.

Couple more access with a recalculation of RMDs, said Zuschin, and advisors could be working with retirement accounts that are more flexible—and therefore more valuable.

Retirement-focused automated investment platform United Income will be competing with advisors to get access to those assets. A rework of the RMD rules would be relatively easy to implement, said Elizabeth Kelly, SVP of Operations. The robo already has made changes after rules changes were passed in January’s tax bill.

Americans would truly benefit, Kelly said, from decreasing the complexity of distribution rules. “Reforms that both recognize longer life expectancy and that try and minimize the burden for retirement savers and retirees are [for the better],” she said. “But obviously the devil’s in the details.”

Those details will be available when the government reports its findings, less than a year from now.