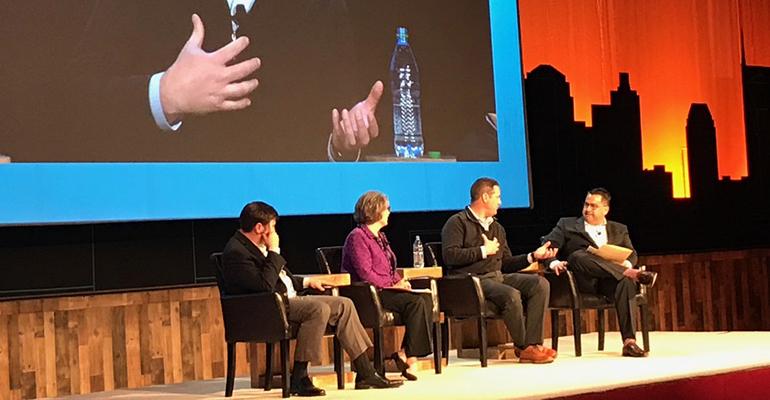 Plan Sponsors Share How Advisors Can Win Their Business

Executives from three companies gave attendees at the NAPA 401(k) Summit some do’s and don’ts, and what they really look for advice on.

The majority of the more than 1,000 advisors who attended the National Association of Plan Advisors’ annual summit in Nashville this week gathered to hear a panel unlike most others: one with plan sponsors who shared how advisors can win business and what they are really looking for out of their advisor relationship.

The answer was—like the one to many questions in finance—it depends.

But the three panelists—Marjorie Mann, a senior attorney at NextEra Energy, a Fortune 500 energy company with approximately 14,000 employees in the U.S. and Canada; Richard Clegg, the director of finance and the treasurer of O.C. Tanner, an employee recognition and reward solutions provider with more than 1,600 employees in 59 countries; and Jacob Nichols, the director of human resources at Palmer Trucks, a commercial truck dealership company with 600 employees—did share some do’s and don’ts with the attendees.

Roughly half of those who participated in a live poll during the discussion said their practice adds the most value to clients through education and advice, but the panelists disagreed.

“I would probably lean toward governance and I would say that because it’s probably something I’m least familiar with,” Clegg said. Before his role at O.C. Tanner, Clegg said his background in accounting and finance lent itself well to other areas such as education, investments and administration related to company retirement plans.

Even Mann, who oversees compliance at her company, said governance is often the biggest value added because the plan advisor “can provide backup.” That includes the advisor meeting with her and company committees to explain decisions related to plan governance.

All the panelists had been working with their plan advisors for a number of years, but they admitted they go out to market and see what others might have to offer. Clegg said, as a fiduciary to the plan offered to employees, he felt it was this company’s job to constantly try to improve the benefits offered, including evaluating its plan advisor.

The plan advisor to Palmer Trucks even suggested to Nichols that the company evaluate what was out there. To his surprise, Nichols said the incumbent advisor didn’t just write a few sentences in response to questions sent to prospective advisors, they submitted a full proposal as if they hadn’t already been working with the company.

“Frankly, I forget exactly what they do,” Nichols said. “When you’re in a relationship [with the plan advisor], you kind of take for granted what they do.”

That extra effort was in part why Palmer Trucks continued to work with their plan advisor. Mann said advisors who take thorough notes and are proactive in following up with the company with details from previous meetings and proposals are ones that will find business.

The panelists also dished on things plan advisors do that bother them.

“One thing that really drives me crazy is when vendors say, ‘we’ll take care of that later,”’ Nichols said. If he’s available for a conversation and dedicating time to someone interested in working with his company, Nichols expects them to be prepared.

Another thing that drives Nichols “crazy?” When he tells a salesperson “no” and they continue to try to sell him on something. “They are trying to close the deal on the initial phone call and it’s not natural,” he said. Nichols said establishing a relationship through referrals is always the best because he might say no today, but if he’s looking for a new plan advisor tomorrow, he’ll remember the ones he has a relationship with.

Other things that irked the panelists were solicitors that bad-mouthed other plan advisors and those who ooze narcissism.

Even if someone is the smartest person in the room, Mann said, they can show that in other ways, such as having awareness of the knowledge level of others and respectfully explaining things.