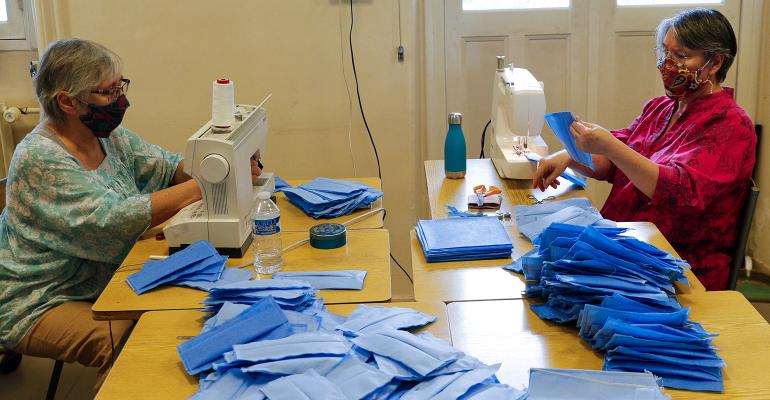 Today, roughly 1 in 5 adults aged 65 and older remain on the job, according to the Bureau of Labor Statistics. In the mid 1980s, the ratio was closer to 1 in 10.

(Bloomberg) -- The pandemic is extending the trend of older Americans working longer -- and giving up long commutes is part of the reason.

Today, roughly 1 in 5 adults aged 65 and older remain on the job, according to the Bureau of Labor Statistics. In the mid 1980s, the ratio was closer to 1 in 10.

Related: 2020 Pushed Many Advisors to Plan Their Own Retirement

Although the number of older workers dipped in the initial stages of the pandemic along with employment overall, it has since rebounded and anecdotal evidence suggests working from home has helped.

“Certainly working out of the home is a much more comfortable environment because my commute is 35 seconds and I don’t necessarily have to deal with office politics,” said Ray Bjorklund, the retirement-age owner of Birchgrove LLC, a market-analysis firm.

Related: Retirement Planning in a Pandemic

The December BLS Employment Situation report put the unemployment rate for older Americans at 5.9%, more than half a percentage point lower than the overall jobless rate. The bureau will release the January report on Feb. 5.

Not all older workers have had the option to stay employed. Many were forced into early retirement during the pandemic, said David John, a deputy director of the Retirement Security Project at the Brookings Institution.

“People who are suddenly unemployed or have reduced hours are now in a position where they are forced to live on whatever retirement savings” they have, he said. They may be forced to take social security earlier than expected “and that’s likely to have a negative effect on their overall income that’s going to last for the rest of their retirement.”

For those able to remain in the labor market, data suggest some older workers want to bolster their retirement assets. A study last year by the Federal Reserve showed that only half of Americans older than 60 said their retirement savings were on track. The average Individual Retirement Account balance in the third quarter of 2020 for people over 60 was slightly more than $200,000, according to Fidelity Investments.

Christopher MacNamara, a Merrill Lynch wealth adviser, said most of his clients “are not working to put food on the table, but rather to stay mentally challenged and engaged. Clients who enjoyed working before the pandemic seem to be planning to work more years because they can do their work from home.”

Americans who are now 65 can expect to live on average almost 20 more years, according to the National Center for Health Statistics. Watching TV all day isn’t enough stimulation for many people.

Indeed, the curtailment of many activities during Covid-19 also reduced non-work options for retirees. Traditionally, people ages 65 to 75 spend twice as much time attending civic and religious activities than people in prime working years.

Richard Edelman, who runs a forensic economics consulting business, said many older workers have the experience and financial wherewithal to build businesses for their retirement and that accounts for some Americans remaining in the labor force.

“You can’t literally walk into retirement and just look out the window all day,” Edelman said. “You need something intellectually to grab you, something that can occupy your mind.”

The advent of the Internet and other technology advances in recent years has made working from home -- whether for themselves or corporations -- much easier than in the 1980s when only 10% of Americans could pull that off.

After close to 32 years at General Dynamics, Jerry Foil, 61, took early retirement in 2013 to cash out a legacy pension plan. But once retired, he decided to start a consulting firm, Endgame LLC, which helps firms compete for large government contracts.

Technologies like Zoom, which became even more widespread during the pandemic, have only enhanced Foil’s ability to work outside a traditional office.