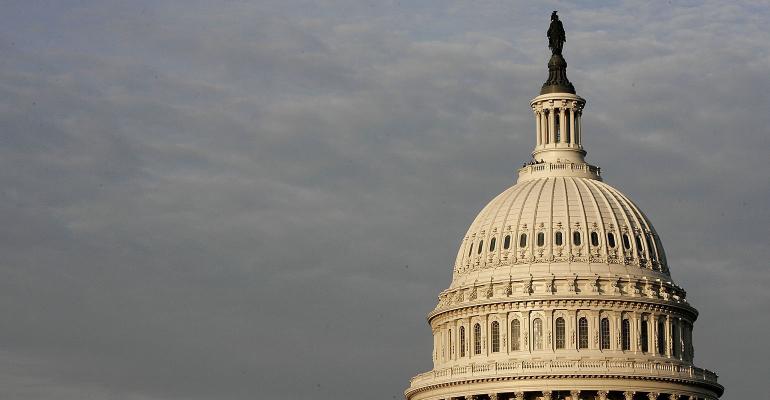 How Tax Reform Could Squeeze the Middle Class, in Five Scenarios

What the debate in Washington means for your clients' money—and their retirement.

(Bloomberg) --One of Washington’s biggest mysteries may soon be solved: What exactly are President Donald Trump and Republicans in Congress planning to do about taxes?

Lawmakers are expected to unveil a framework for tax reform on Wednesday. Trump wants Congress to act quickly. At a dinner Monday night, he said he expects the House of Representatives to pass a bill in October and the Senate to act by the end of the year. The broad goals are a simpler tax code with fewer brackets and lower rates for corporations and individuals.

If you save for retirement or itemize your tax deductions, you could end up paying thousands of dollars more after tax reform than you do now. To help pay for promised cuts, lawmakers are trying to raise revenue elsewhere.

And the best place to get this money may be the millions of Americans who use deductions and other such strategies to lower their tax bills.

Upper-middle-class taxpayers in particular could face a triple whammy. On the table are limits on—or even the elimination of—three of their favorite tax perks: deductions for mortgage interest and for state and local taxes and the ability to make pre-tax 401(k) retirement contributions.

The wealthiest Americans, meanwhile, may have the most to gain from tax reform. The latest proposals include the elimination of the estate tax, which applies to estates of $5.49 million or more, and a cut in the top rate paid by rich individuals and business owners.

To figure out how much is at stake, we asked the Tax Institute at H&R Block to run some numbers. We looked at several hypothetical taxpayers with six-figure salaries, examining how much each one gains, and stands to lose, from tax provisions now under scrutiny.

Our five imaginary taxpayers are single homeowners under age 50 with salaries of $100,000, $200,000, $300,000, $400,000, and $500,000, with typical financial profiles for those income levels. They report some investment income in addition to their salaries, donate 5 percent of their salary to charity, and live in California, a state with a relatively high income tax.

Here’s what we found.

Right now, workers can put up to $18,000 a year in a 401(k) retirement account, and another $6,000 if they’re 50 or older, bringing the total to $24,000. Those savings are made pre-tax, so they instantly drop a retirement saver’s income, and thus tax bill, in the eyes of the IRS. Money in a 401(k) is taxed only when it’s withdrawn from the account, possibly decades later.

Congress is exploring changes to the rules that would push workers to make more of their contributions to post-tax accounts, also known as Roth 401(k)s, from which money isn’t taxed when it’s withdrawn. For Congress, moving from traditional to Roth would bring in more money in the short term, even if it robs the Treasury of tax revenue later.

For someone earning $200,000 or more and making the maximum possible contribution—as they should if they hope to keep up their standard of living in retirement—a traditional 401(k) cuts taxes owed by more than $8,000 a year.  Even someone making $100,000 and saving half the maximum amount in a traditional 401(k) is lowering his or her tax bill by almost $3,000 a year. (To keep things simple, our taxpayers are single and childless, but these tax breaks can be just as valuable to couples and families.) The possible “Rothification” of 401(k)s is worrying many retirement experts, along with the financial firms that manage that money.

“Comprehensive tax reform has the potential to be one of the biggest threats to our retirement system, in a way that ruins our incentives to save,” said Bradford Campbell, a partner at the law firm Drinker Biddle & Reath LLP who served in the U.S. Department of Labor overseeing employee benefits under former President George W. Bush.

Overall, tax breaks for 401(k)s and other workplace defined-contribution plans cost the U.S. government $102 billion this year, according to the Joint Committee on Taxation, a nonpartisan congressional research group. The number is expected to rise to $146 billion by 2020.

Your state and local taxes

Tax expert Robert Willens, of New York-based Robert Willens LLC, said an area of “huge concern” for his clients is the possibility that the deduction for state and local taxes, or SALT, will go away. In a high-tax locality like New York, a client making $1 million may end up paying $120,000 in state and local taxes, he said. By deducting those taxes on a 1040 return, the client might avoid $48,000 in federal taxes. If Congress kills the SALT, as the Trump administration has proposed, “that’s a massive tax increase,” Willens said.

The SALT will cost the government $69 billion this year, the Joint Committee on Taxation estimates. It saves lots of money for our hypothetical taxpayers, who we assume live in highly taxed California. While the SALT is most valuable in states with higher income taxes, it is used across the country to cushion the blow of local tax burdens, including sales and property taxes. For example, in Texas, which doesn’t have a state income tax, 23 percent of itemizers still claim a SALT deduction. In Maryland, 45 percent of itemizers claim it. In three wealthy New Jersey districts represented by Republicans, SALT deductions make up a hefty 10 percent of adjusted gross incomes.

Some House Republicans from high-tax states say they’ll fight to keep the SALT.

House Speaker Paul Ryan has promised to “maintain” the mortgage interest deduction, but he and other Republicans haven’t ruled out limiting the use of the tax break in some way.

Homeowners can currently deduct interest on their tax returns on $1 million in mortgage debt and another $100,000 in home equity loans, for both their first and their second homes. Our scenarios assume taxpayers took out a 30-year mortgage with a 4 percent rate to buy homes worth $375,000 to $750,000. The mortgage interest deductions ends up lowering federal tax bills by $2,000 to $6,000 for these taxpayers, covering a significant share of the interest they pay each year. Still, the deduction is a tempting target for tax reformers. In all, it will cost the U.S. Treasury $64 billion this year, the Joint Committee on Taxation estimates.

The Tax Institute at H&R Block re-ran the numbers as if all three tax breaks—401(k) contributions, mortgage interest, and SALT—were no longer available. It’s unlikely Congress would completely repeal all three of these tax breaks. If lawmakers end or tweak any of them, they could cushion the blow with other tax changes. One that could help affluent taxpayers is the elimination of the alternative minimum tax, or AMT. The AMT is a complicated parallel tax system designed to limit the amount by which wealthy taxpayers can lower their bills with lots of deductions.

In our scenarios, the wealthiest three taxpayers, making $300,000 or more, are affected by the AMT because they take big deductions for SALT, mortgage interest, and charitable contributions. The AMT costs them each several thousand dollars a year. Eliminating it would help these taxpayers offset the loss of perks like the SALT.

Keep in mind, though, that Congress could kill the AMT but replace it with other provisions, probably simpler, that also limit deductions.

Another way Congress could help out wealthy taxpayers is by lowering their rates.

For single taxpayers earning more than $418,400 in ordinary income annually, the top, or marginal, rate is 39.6 percent. Proposals circulating in Washington suggest this could drop to 35 percent for individuals and all the way to 25 percent for some owners of  “pass-through” businesses.”

Under Trump’s plan, lawmakers may double the standard deduction, an amount by which every taxpayer can lower their tax bills without itemizing. That could be a boon to upper-middle-class taxpayers who have relatively few deductions to make because they don’t have a mortgage, they live in a low-tax state, or they don’t contribute much to charity.

For affluent homeowners in high-tax states with lots of deductions, however, tax reform could be painful.