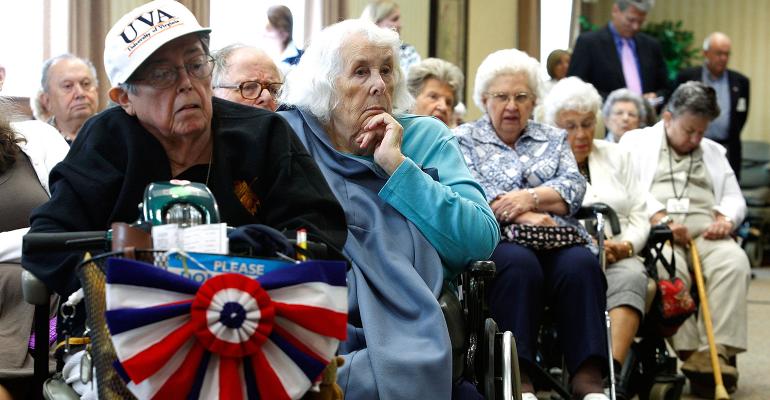 The Decade in Retirement

What a roller coaster this decade has been for retirement planning.

In 2010, the economy was reeling from the worst recession and financial crisis in recent memory. The stock, housing and employment markets were disaster areas.

The Great Recession inflicted permanent damage on the retirement prospects of millions of Americans, despite the strong economic rebound we have experienced since then. Reviewing the data recently on retirement saving, housing and wages brought to mind the wonderful line from Billie Holiday's God Bless the Child: “Them that's got shall get, them that's not shall lose.”

During this decade, we have seen financial and housing wealth accumulate almost exclusively among affluent households. What of the rest of the country? Some defenders of the current retirement system point to Social Security, which has a progressive benefit formula and replaces more preretirement income in lower wage bands. These folks will be fine, the argument goes—they will simply live on Social Security

Easier said than done—the average Social Security retirement benefit for a worker claiming in 2018 at full retirement age was $1,523.

And the Employee Benefit Research Institute’s projections of retirement risk—which take into account not only savings and home equity but also Social Security and pensions—suggest that the odds of a successful retirement fell during the decade for older households in the lowest quartile by income and stayed more or less flat for the second-lowest quartile.

Retirement planners, of course, work with that upper half of income distribution. How do retirement planning and policy experts see the decade? I asked some of the smartest folks I know for their thoughts on the most significant changes. Here’s what I heard.

This turned out to be a great decade for stock investing. The S&P 500 more than quadrupled—and at the same time, investor costs plunged, driven by the meteoric growth of passive indexing and exchange traded funds (ETFs). “Retirees get the link between fees and returns,” says Allan Roth, founder of Wealth Logic LLC, in Colorado Springs, Colo., who notes that U.S. stock index funds now have more assets than active funds.

We’re still seeing Hail Mary efforts in favor of active strategies—for example, this recent Wall Street Journal story on “concentrated funds.” The pitch: Actively managed funds concentrated on a very small number of stock picks can outperform in down markets. But, as the reporter gamely notes, they don’t. The active-passive debate should not spill into the new decade, I think—it’s game over.

Michael Kitces of Nerd’s Eye View and XY Planning Network notes that ETFs have been a very important part of this story.

“ETFs really gained momentum, driving down investment product costs across the board—dragging down mutual fund expense ratios and, ultimately, helping to drive the collapse of trading commissions altogether. It’s cheaper than ever to be able to invest dollars as a retiree to participate in the capital markets.”

Automation has been one of the most striking trends. Robo-advisory services are one example of this, but the growth of target date funds has been nothing short of stunning, especially in workplace plans.

The commoditization of investing has sent planners on a search for a more holistic range of services to offer clients to add value and retain business.

“While our profession was based primarily on helping clients build portfolios, the ability to build quality portfolios has been increasingly marginalized,” says David Blanchett, head of retirement research for Morningstar. “Just helping someone building portfolios isn’t worth what it used to be. Therefore, the biggest change is the increased positioning of financial planning as the scope of services being provided to clients.”

Blanchett thinks increasing numbers of advisors are adopting this philosophy, which means clients are indeed receiving greater value from the relationship.

I’ve long argued that planners should focus on helping clients through the tricky transition from work to retirement—especially decisions about Social Security claiming, Medicare enrollment and possible housing changes.

Investing legend Charley Ellis put it this way when I interviewed him about the commoditization of investing for a column in these pages back in 2016:

Decumulation has become an industry buzzword. This may be yet another example of a more holistic service offering—but it also reflects that aging of the population and the growing number of people living in retirement, notes Steve Chen, founder of NewRetirement. “I think there is an increasing focus on income versus assets as people start to realize that decumulation is a much harder challenge than accumulation,” he says.

Decumulation strategy can include everything from managing lifetime income sources (Social Security, pensions and annuities) to tax-efficient drawdown strategies, and health care cost strategies. The latter might include strategies for avoiding Medicare high-income charges or smart deployment of health savings accounts, for example.

Another mega-shift this decade has been the rise of fee-based or fee-only planning arrangements. Some of this, no doubt, stems from all the publicity and media surrounding the battle over fiduciary standards (more on that below). Research published earlier this year by Cerulli Associates found that “74% of advisor-assisted investors preferred a fee arrangement. This number jumped to 87% among advisor-directed households. In contrast, those with little advisor dependence prefer commission-based relationships.”

A  2017 Cerulli study found that this trend is especially pronounced among younger investors.

Blanchett sees the trend as something of a mixed bag. “This is generally touted as a good thing because it better aligns the interests of the client and the advisor. But it also has its drawbacks—some clients don’t necessarily need ongoing advice, and other recommendations that could reduce assets might not be viewed as favorably because it reduces the pool of available assets to manage.”

Fair enough, although the AUM motive shouldn’t be the case among fiduciary advisors—if a recommendation to shift assets away from the advisor is in the best interest of the client. And, there always is the option of a one-time planning checkup, as per the model that Sheryl Garrett’s fee-only network promotes.

Third decade for the fiduciary battle

The financial services industry and regulators fought for most of the decade about fiduciary standards. It wasn’t the first decade in this battle, and it won’t be the last.

The financial crisis gave birth to the Dodd-Frank Wall Street Reform and Consumer Protection Act in 2010, which included a call for sweeping reforms to financial advice. When the Securities and Exchange Commission dawdled on this for much of the decade, the Department of Labor decided to adopt its own fiduciary rule governing retirement accounts. The DoL rule died in 2018 when courts sided with opponents in the financial services and insurance industries, ruling that the department had overstepped its authority.

Now we have the SEC’s Regulation Best Interest, which has pleased the powers that be on Wall Street but just about no one else. My bet is the battle is not over—Reg BI could have a short shelf life, since it was adopted on a partisan vote among the SEC commissioners and contrary to the will of Congress (again, see Dodd-Frank). If a Democrat wins the White House in 2020, partisan control of the SEC will shift yet again, and Reg BI likely will be high on the list of topics to revisit.

Kitces has a similar take on this. “No one should be lulled into thinking that continued attention to conflicts of interest in the retirement and other advice marketplace will wane just because the SEC has issued guidance,” he says. “Until a true fiduciary legal standard imposing a duty of loyalty similar to that under ERISA is adopted at the federal level, the harm to investors caused by advisor conflicts will continue to shadow the advice industry.”

Phyllis Borzi, who championed the DOL fiduciary rule during her time as assistant secretary for employee benefits security at the agency, sees some silver linings as she looks back at the decade.

“I am encouraged that recent surveys show a definite uptick in the number of investors who are asking potential advisors if they are or are willing to be fiduciaries with respect to the advice they give.”

“I always tell investors that in addition to asking this question, they need to get a statement in writing from their advisors that they are fiduciaries.”

Borzi worries that the SEC rule has further muddled the distinction between RIAs and brokers. “They are not fiduciaries but can continue to hold themselves out as working in their client's best interest without the legal accountability to do so. The SEC’s stated goal was to reduce investor confusion, but their new disclosure standards and other guidance represent a lost opportunity to provide greater clarity for investors.”

Markets: How long can this keep going on?

Kitces notes that it was a decade of low interest rates. “In the 2010s, the fear was an inflationary explosion from Fed policy that would devastate retirees. The good news is that inflation didn’t rear its ugly head, rates didn’t spike, and bonds didn’t crash. The bad news is that means we’ve just continued to drag excruciatingly low fixed income yields for a decade.”

On the equities side, Roth cautions advisors not to let the long run-up in stocks breed complacency. “Memories are short, and with the record long bull market, we think we can take a lot of risk again,” he says. “Remember the bear!”