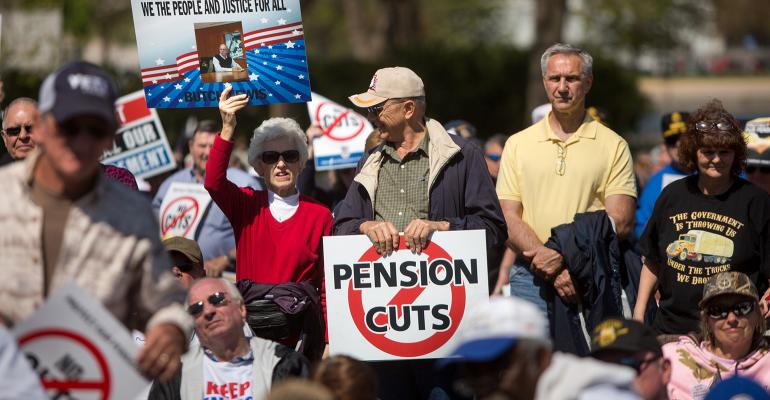 The Conflict at the Heart of U.S. Retirement Plans

(Bloomberg View) -- Last week, yet another slew of private retirement plan managers became the target of class-action lawsuits. This time it was a bunch of universities: Yale University, New York University, the Massachusetts Institute of Technology and other schools have been sued for failing to properly oversee their employees’ retirement plans.

The lawyer behind the suits, Jerome Schlichter, has already hit companies for failing to administer their 401(k) plans responsibly; this latest wave of suits targets the so-called 403(b), a form of defined contribution plan used by non-profits like universities that closely resembles the 401(k).

These suits are sending shock waves through the world of private retirement plans. And with good reason: They betray the nation’s unresolved confusion over the historic change that’s occurred in how most people save for retirement. Once upon a time, in the bygone age of defined-benefit pension plans, it was assumed that employers would bear all the responsibility of ensuring that the money they set aside to finance these pensions was invested responsibly and efficiently.

​As pensions were gradually replaced by defined-contribution savings plans that asked employees to make their own investment choices, a profound tension was born: Did employers still have a fiduciary duty to their employees, and if so, what was it? Despite periodic efforts to resolve this tension, the ambiguity remains, opening the door to these lawsuits.

In particular, Schlichter argues the defendants haven’t used their leverage to get the best deal for their employees, causing them to “pay unreasonable and greatly excessive fees for record-keeping, administrative, and investment services.” The suit also alleges that the plans have steered employees toward investment options that have “historically underperformed their benchmarks and charged excessive fees.”

To understand the origins of this mess, take a trip back in time to the 1960s, when many American had pensions: defined-benefit plans that allegedly guaranteed retirees a set payout in their old age.

Then came the Studebaker-Packard Corporation, a carmaker that made just such a promise -- and then went bankrupt. In 1963, it defaulted on its pension obligations, and the workers it left out in the cold eventually prompted a bill described as “the most complex piece of legislation that Congress has ever enacted.”

That legislation was the Employee Retirement Income Security Act of 1973, better known by its acronym, ERISA. In many ways it looked backward: the impetus for its formation, its intended scope, and its application to defined-benefit plans like the one that Studebaker-Packard offered but are rare today.

ERISA looked backward in another way, too. The law treated the companies and organizations that offered defined-benefit plans as trustees, borrowing heavily from what’s known as the law of equity, a body of juridical practice that dates back to medieval times. Though equity law and common law are now co-mingled in our courts, they provide different recourse for plaintiffs and different burdens on defendants.

Equity law governs trusts; the original defined-benefit plans, which left responsibility for management retirement benefits solely and exclusively in the hands of employers, looked like textbook trusts. But these old-fashioned pension plans would soon be supplanted by a very different retirement vehicle, created after Congress added subsection “k” to section 401 of the tax code in 1978.

The new 401(k) defined-contribution plans, by contrast, didn’t look like trusts. In fact, they marked a profound shift in how Americans plan for retirement: Rather than the older, more paternalistic (but more generous) pension plans -- in which the benevolent employer manages employee savings on their behalf -- the 401(k) required employees to navigate the confusing thicket of investment choices on their own.

But it wasn’t quite the break with the past that it could have been. The defined contribution 401(k) ended up tangled in ERISA’s immensely complicated body of law associated with defined benefits and trusts. Why? Among ERISA’s more minor provisions were regulations governing profit-sharing plans known as a “cash or deferred arrangement” (CODA) plan, a distant ancestor of the 401(k) that no one paid much attention to in 1973.

But when the IRS added subsection “k” to section 401 of the tax code, the old CODA became the new 401(k). As a consequence, the new retirement plans automatically fell under the shadow of ERISA -- something Congress had never intended.

And therein lies the problem. On one hand, 401(k)s and their ilk would seem to shift the burden of making investment decisions onto employees, limiting the fiduciary duty of the employer. On the other, the regulatory apparatus that applies to 401(k)s derives from ERISA, whose ideas of trusts and equity law imposes some serious duties for sponsors of defined-contribution plans -- ideas at odds with the notion that individuals have to take responsibility for their investment decisions.

This disparity informs the lawsuits over excessive fees. Schlichter is pushing courts to recognize that 401(k) and 403(b) sponsors are trustees with grave responsibilities toward their plan participants. Implicit in this line of argument is the idea employers can’t simply shove some investment brochures in front of their employees and let them choose. Rather, the employer needs to get the absolute best possible deal for their employees -- the lowest fees for example -- and select investments that yield an average or above-average rate of return (index funds are the obvious choice).

And in the past few years, courts have started to agree, counter to the ethos that informed the creation of the 401(k). In May, the Supreme Court overturned a lower-court ruling that would have let defined-contribution sponsors off the hook for monitoring the quality of the investment choices on an ongoing basis. In a rare unanimous opinion, the court declared that “under trust law, a trustee has a continuing duty to monitor trust investments and remove imprudent ones.”

This may well be true. But the ambiguity remains. We are caught between two very different philosophies of individual responsibility. On the one hand, workers are still expected to navigate the confusing world of retirement investments on their own. But much of the law governing those investments relieves employees of that responsibility.

Which is it? It may be time for Congress to wade into this mess and clarify, once and for all, the respective duties of employer and employee on the vexed question of retirement benefits.