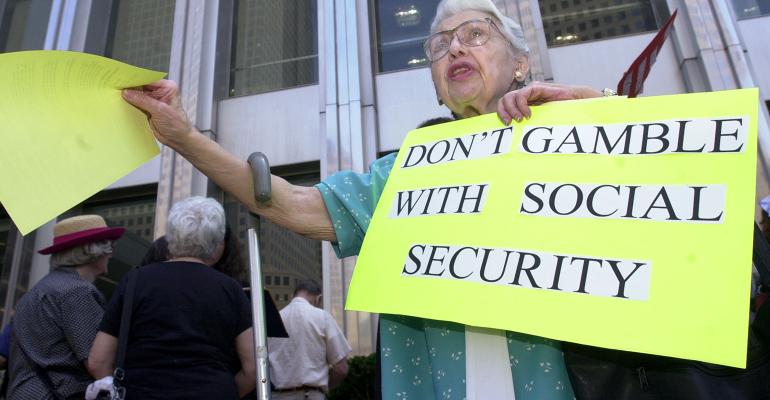 I’ll bet more than one client has asked this question of you: “Will Social Security be there for me when I’m ready to retire?”

Those numbers are stunning, considering that Social Security has never missed a benefit payment and had reserves of $2.9 trillion at the end of 2018. But the polling numbers reflect a steady drumbeat of negative headlines about Social Security finances, most of which are incorrect. Yes, Social Security faces a long-term financial shortfall. But the system is not “running out of money” or “going bankrupt” as so many of my fellow journalists dutifully report each year when the Social Security trustees issue their annual report. Another popular canard: Social Security drives the federal deficit. It does not.

How should advisors respond?

The biggest problem to avoid is letting worries about Social Security’s health drive a decision to file for benefits early, says Elaine Floyd, director of retirement and life planning for Horsesmouth, which trains advisors. “Many clients use the solvency issue as an excuse to claim early, which is what they want to do anyway—Social Security may not be around, so I better get it while I can.”

“We like to show them all the numbers and then point out that if they claim early due to a worry that the system could go broke, you’re really taking the risk that it won’t—and you will end up with a permanently lower benefit.”

So, what do the numbers show?

The combined trust funds for Social Security’s retirement and disability programs are on course to be depleted in 2035; without changes, funding from payroll tax receipts will be sufficient to pay only 80% of promised benefits. That would mean immediate, across-the-board benefit cuts, but the pain would be felt most acutely by today’s younger workers and low-income retirees.

One cause of the shortfall is the accelerating retirement of the baby boomer generation. Another is the slow growth of the labor force, which reduces the ratio of workers paying into the system to beneficiaries. Rising life expectancy also plays a role, as does rising inequality in worker earnings. (The legislative history indicates that Congress intended for the payroll tax to cover 90% of all wages, but wages above the cap have been growing more quickly than average wages. As a result, the tax now covers just 83% of all wages.)

The 2035 cliff would be a disaster for the nation’s retirement security. But what are the odds that we’ll get there? Slim to none, I’d argue. Please try to imagine a member of Congress returning home to her district in that year to explain to retirees why she permitted their Social Security benefits to be slashed by 20%.

As Nan Lesnick, a planner based in Monterey, Calif., puts it, “These are folks who mark their calendars for Election Day—they’re not even scheduling doctor appointments that day.”

Lesnick says clients often express doubt about Social Security. “I simply tell clients there will need to be reform at some point,” she says, adding that she suspects whatever reforms are made will mainly affect today’s younger workers. “People who are close to retirement or in their mid-50s are not in danger.”

How, and when, will Congress take steps to fix the problem? The solution is not difficult from a math perspective: We can fix Social Security’s financial problem with higher revenue, benefit cuts or some combination of the two. If you want to play with various options, try the online Social Security game created by the American Academy of Actuaries, which lets you select various reform options to see their potential impact on the program (and consider sending it to worried clients!).

Benefit cuts could take several forms—a higher full retirement age and less generous cost-of-living adjustments often are mentioned. But reductions would be an unwise policy. Social Security income is crucial for lower-income households, and even the retirement plans of affluent households also would suffer if benefits were reduced. What’s more, older Americans are affected disproportionately by higher rates of inflation for health care and housing, which makes Social Security’s annual cost-of-living adjustment critically important for maintaining living standards in retirement.

Higher payroll taxes offer a smarter approach. Polling shows that most Americans would be happy to pay a bit more to keep Social Security solvent. That brings me to yet another falsehood perpetrated in the media—namely, that Congress isn’t doing anything to fix the problem now.

While no one seems to be looking, the House of Representatives is working on the most substantive, serious Social Security reform bill in years. It is sponsored by Rep. John B. Larson (D-Conn.), who chairs the Ways and Means Social Security Subcommittee. The bill is on track to get a vote on the full House floor sometime before year-end and had 211 co-sponsors at this writing.

Larson’s bill puts Social Security back into balance over the next 75 years—the period of time the program is required by federal law to project its finances. On the benefit side, it provides an increase for all enrollees equivalent to 2% of the average benefit—about $30 per month. It would shift to a more generous annual cost-of-living adjustment formula and beef up the special minimum benefit paid to low-income retirees. For higher-income seniors, the bill also includes, effectively, a benefit boost via a reduction in taxation of benefits.

Larson pays for this by adding new payroll taxes to wages over $400,000 (currently, tax collection stops at $132,900 of annual income). The bill also would gradually phase in a higher payroll tax rate, with workers and employers each paying 7.4% by 2042, compared with the current rate of 6.2%.

The bill is not likely to become law while Republicans control the Senate and White House. But passage by the House would put a stake in the ground, demonstrating that a fix is within reach. And that is worth pointing out to your clients, too.