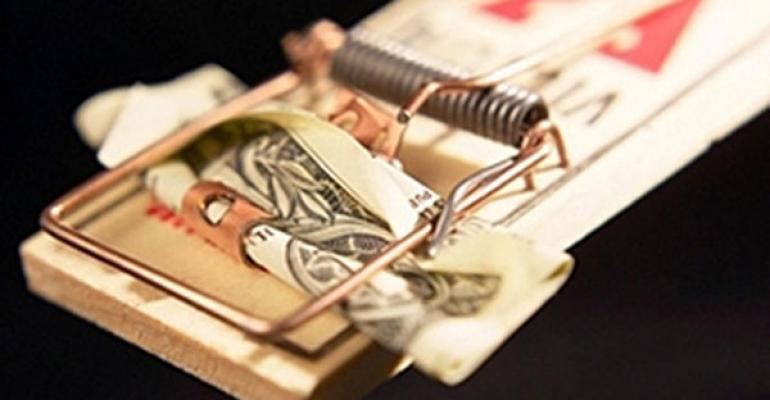 The ‘Below Average’ Fund Fee Could Eat Your Retirement

Overall fees paid by investors are down. But the math can be tricky.

(Bloomberg) --Average fees paid for U.S. mutual funds and exchange-traded funds fell to a new low of less than 0.6 percent in 2016, Morningstar reported on Tuesday.

That's good news for investors. But as fund companies drive down those expense ratios in a fight for your savings, beware the marketing that goes with the price war.

Weighting fees by the size of a fund's assets, the fund research firm found that investors paid an average expense ratio of 0.57 percent last year, down from 0.65 percent in 2013. That's a 14 percent drop, the largest annual decline Morningstar has seen in more than a quarter-century. So far, so good.

A fund's expense ratio is the percentage of invested assets it takes out annually in management fees, operating costs, and so forth. Weighting lessens the impact of high-fee funds with low assets, which otherwise tend to exaggerate the average expense ratio. When Morningstar calculated the simple average expense ratio for all funds, without weighting by fund assets, it was 1.14 percent.

The problem is that when an expense ratio is touted as "below average," it isn't always clear which average is being used. Next to 1.14 percent, a fee touted as below average could be more than 1 percent—no bargain. In fact, that 1.14 percent represented less than 10 percent of all fund assets at the end of 2016.

The lower fees in the chart below are mostly the result of investors shifting money out of higher-priced actively managed funds and into lower-cost passive index funds and institutional share classes of funds. Here are some highlights of the report, based on asset-weighted fee averages.

The winners were Vanguard, at an average of 0.11 percent; SPDR State Street Global Advisors, at 0.19 percent; and Dimensional Fund Advisors, at 0.36 percent. BlackRock/iShares wasn't far behind, at 0.38 percent. Next came Fidelity Investments, at 0.58 percent.

Only category to see fees rise: alternative fundsThese funds, which deploy a host of complicated investing strategies, were alone in seeing average fees rise, to 1.34 percent last year from 1.27 percent in 2013. One reason for the increase is performance chasing by investors, which swelled the assets of some of the higher-performing—and higher-fee—funds. That gave them more weight in the calculation of asset-weighted average fees. "Expensive active funds, such as Marketfield (whose institutional share class charges 1.56%) and Gotham Absolute Return (2.20%), enjoyed large flows following a year of strong performance," the Morningstar report said.

Thanks to the price war among the fund companies, the average expense ratio on ETFs was 0.24 percent last year. That's down from an already low 0.29 percent three years before.

The lesson for investors: Expense ratio claims are relative. It literally pays to scrutinize "below-average" fees.