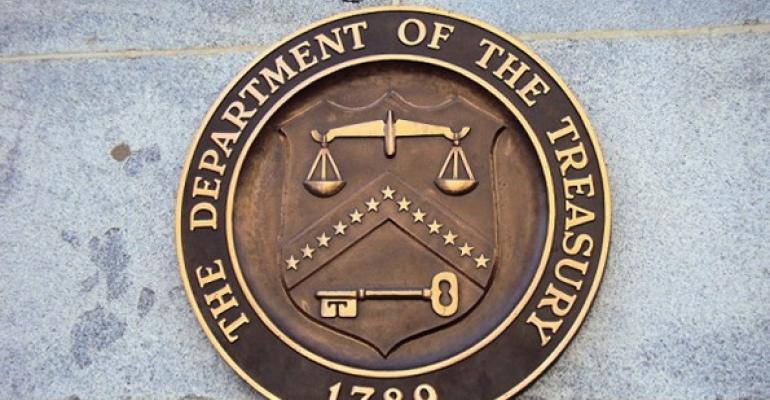 U.S. regulators moved closer to proposing fresh reforms to the market for Treasury securities as they continue to study the disruptions of March 2020 that were triggered by the onset of the Covid-19 pandemic.

A progress report released Monday by a panel of staff from the Treasury Department, Federal Reserve and other top regulators identified five areas of study. It showed continued interest in expanding central clearing, improving transparency around dealing activity and enhancing trading-venue oversight, among other themes. The report was prepared by the Inter-Agency Working Group for Treasury Market Surveillance, which gave no timeline for any eventual recommendations.

The Fed in July implemented the most important response since the March 2020 meltdown when it made permanent its standing repurchase facility -- a mechanism for providing short-term financing to financial institutions through repo agreements. The IAWG report continued to ponder expanded eligibility for the domestic version of that program, following some adjustments made by the New York Fed in August.

The report focuses largely, but not exclusively, on the dramatic withdrawal of investors from the market for longer-term Treasury securities amid the global rush for cash dollars last year at the start of the Covid-19 crisis.

Increased central clearing, which has been proposed by some outside observers, including a panel of former policy makers known as the Group of 30, has emerged as a focus, but the report stopped short of any clear recommendations.

Some commentators believe an increased role for central clearing can reduce the risks of disruptions by limiting the market’s current heavy reliance on dealer balance sheets and their limited ability to handle stressful market events. It’s something that’s been debated in the industry for years, and offers benefits -- but also potential costs and implications for the financial system -- so there’s been no decision yet on taking measures to expand its use in the Treasury market, government officials told reporters on Monday.

As participants in the government debt market changed through the years, the share of trades that clear centrally has fallen. The Treasury Market Practices Group has estimated that 13% of cash transactions are centrally cleared, 68% are bilaterally cleared and 19% involve hybrid clearing schema, Monday’s report said.

The report identified several sources of the dramatic demand for liquidity in March 2020 -- including foreign investors, open-ended bond mutual funds, hedge funds, pension funds and leveraged investors, all of whom fled from longer-dated Treasuries.

To halt that March 2020 meltdown -- which threatened to bring the world’s largest and most liquid financial market to a standstill -- the Fed intervened with massive purchases of Treasuries.

Hedge funds, Monday’s report noted, were among the largest sellers of Treasuries amid the March 2020 havoc. The Financial Stability Oversight Council, or FSOC -- a separate panel of regulators charged with monitoring threats to overall stability -- has established two other inter-agency working groups to study the role of open-ended mutual funds and hedge funds in the episode.

In studying the 2020 episode and other more minor Treasury-market disruptions, the report called it a “recurring theme” that during times of stress intermediary institutions have only a limited capacity and willingness to provide the liquidity needed for normal market operations. It’s also happened against a backdrop of surging supply of government debt.

One potential change coming is more detailed reporting on trading volumes between dealers and dealers and customers of Treasuries, detailed by category including maturity. The introduction of aggregated weekly reporting has proceeded well, Monday’s report suggested. Given “the lack of negative market feedback, it is consistent with prior principles to explore increasing transparency further,” it said.

In addition to the Treasury Department, other members of the IAWG are the Fed’s Board of Governors, the New York Fed, the Securities and Exchange Commission and the Commodity Futures Trading Commission.